Tragic: Your Heartfelt Facebook Post About Your Friend’s Death Isn’t Getting The Engagement It Would Have In 2013 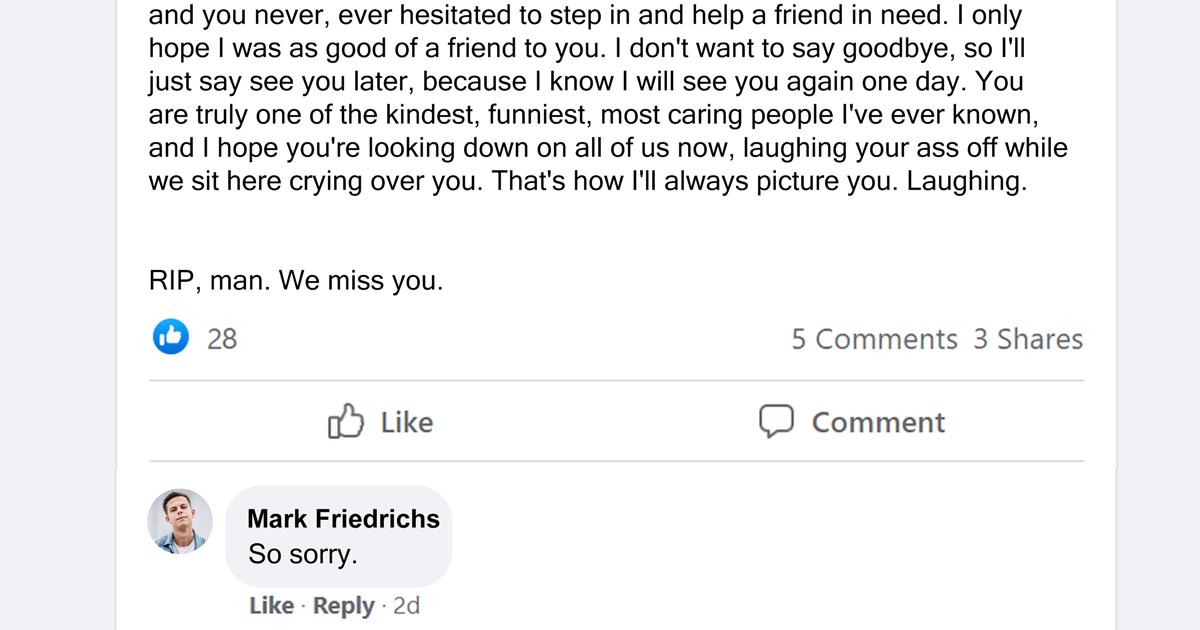 As if losing a close friend wasn’t hard enough, a devastating turn of events currently unfolding on social media has made matters even more heartbreaking: Your heartfelt Facebook post about your friend’s death isn’t getting the same kind of engagement it would have in 2013.

God, what a tragedy. The grief is almost too much to bear.

Having only racked up a meager 28 likes, zero shares, and five comments in the 24 hours since you posted it, your deeply moving post memorializing your late friend is failing to garner even a fraction of the engagement it would’ve received back in the good ol’ days of Facebook, before most of your friends stopped regularly using the platform or just deleted it altogether. Had your friend succumbed to cancer in the years when young people still proliferated on Facebook and it hadn’t yet been overrun by Baby Boomers posting Russian propaganda and Looney Tunes memes, your thoughtful tribute would have likely raked in at least six times more engagement, easy. But now, the audience for this genuinely tearjerking post reflecting on your friend’s life is made up of the last remaining stragglers who haven’t migrated to better social networks, tragically failing to do justice to your friend’s memory.

While there’s some consolation in the fact that a lot of your friends responded to the post with sad face and heart reactions, it’s just not the near-viral sendoff your friend deserves and certainly would’ve received had he bit the dust a decade ago. It makes you realize just how cruel and unfair the world can be, and you wonder how a loving God could possibly allow someone to die so young yet fail to generate a satisfying online response with their death. Your friend—and your post commemorating him—deserve so, so much more than what the Facebook algorithms facilitated.

To see a profoundly moving memorial to your friend hardly pull any numbers on Facebook is a kind of grief that no one should ever have to endure. Here’s hoping your friend is in a better place now—somewhere with endless social engagement and no more pain.