Two-Face’s Face Should Have Been Divided Horizontally Instead Of Vertically. I Will Not Back Down From This. 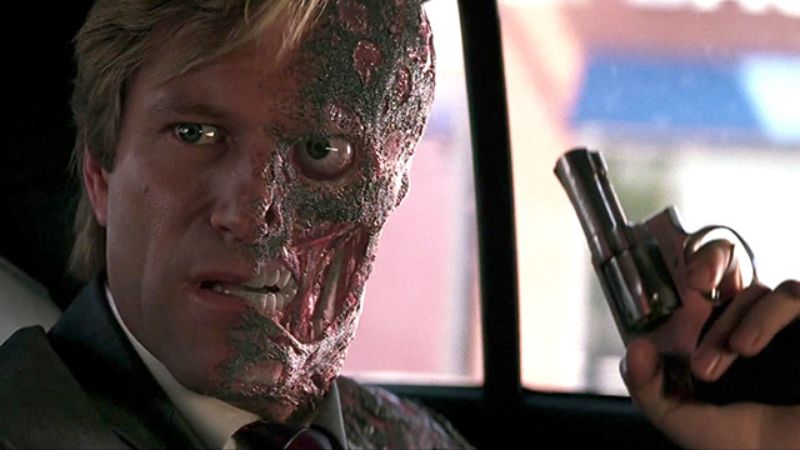 Ask anyone who knows me and they will tell you that I am a reasonable man. I strive to be considerate of others’ beliefs, and, when confronted with an opinion that differs from mine, I’m always willing to look at things from another perspective. But there is one issue that I absolutely will not negotiate on: Two-Face’s face should have been divided horizontally, not vertically. I cannot and will not back down from this.

Two-Face, as we all know, is one of Batman’s biggest nemeses, and he gets his name from the fact that the left side of his face is grossly disfigured and the right side of his face is normal. But anyone who’s given it even three seconds of thought will agree that it would’ve been way cooler and scarier if he was deformed from the nose down and then normal above that. I am steadfast in this opinion.

Imagine this scene that could have been in The Dark Knight: Batman is out in the swamp looking for crime when, all of a sudden, he notices something in his peripheral vision. It’s the hair, forehead, and eyes of innocuous Gotham district attorney Harvey Dent emerging from the water. Batman lets down his guard to say hello and then—BAM—Harvey Dent stands up, revealing that he is actually the villain Two-Face!

Whoa! Doesn’t it give you chills just to think about? It’s the kind of haunting and awesome situation that could never happen with Two-Face as he currently exists. Right now, he’d have to crane his neck sideways and then pop up all awkwardly contorted, which would look stupider than pretty much anything I can think of.

…anyone who’s given it even three seconds of thought will agree that it would’ve been way cooler and scarier if [Two-Face] was deformed from the nose down and then normal above that .

Honestly, it’s mind-boggling that anyone could have ever been on board with a vertically divided Two-Face face in the first place. Anyone who thinks that that’s superior to a horizontally disfigured face needs to either admit that they’re wrong or go get their head examined. There is simply no other way to look at this.

Admittedly, the mechanics of how he would actually become deformed from the nose down are something I haven’t figured out yet. I’m not a writer. But I’m sure the brains over at DC Comics could easily whip up a couple plausible scenarios. If they can’t or—worse—if they won’t, that would just reinforce my belief that anyone who champions a vertically split Two-Face face is a feebleminded moron. I can’t see another explanation.

It’s time we admit that Two-Face’s face is configured wrong, and that’s not just my opinion—it’s empirical fact. The people in charge of Batman should correct the situation immediately, because right now they are standing in the way of progress. We desperately need and crave a horizontally divided Two-Face face, and until this becomes a reality, people should not bring any new children into the world. It would be irresponsible and selfish.