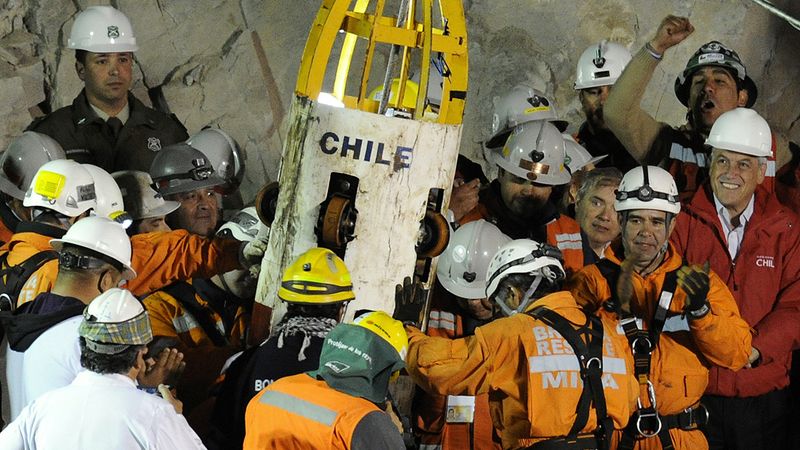 Twenty-two survivors of the 2010 Chilean mine disaster. One simple question: What is the absolute worst mine disaster you’ve ever experienced?

1. Macedo Burdiles: “The one that happened in 2010 was far and away the most severe one I’ve ever been a part of.”

3. Víctor Lascani: “Sorry, are you saying a mine disaster other than the one in 2010, or in general?”

4. Felipe Cayo: “The worst mining disaster I’ve experienced is still the one in 2010.”

5. Esteban Rojas: “Nothing else comes close to what happened in 2010. I was convinced that I’d never see my family again.”

8. Palominos Montalbán: “Years back in Bolivia, I was excavating a tunnel in a silver mine with a group of four guys. After a few weeks of tough digging, one of the other guys uncovers a ticket to Phil Collins playing a solo show in La Paz the next night, just sitting there under 100 meters of shale. We have a little laugh, then get back to work. But minutes later, someone uncovers another ticket, then I find another a moment after that. Well, now we have three tickets, and we are thinking this is pretty neat; and if we just find one more, we can all go see Phil in La Paz. So we start digging like madmen, assuming there’s a fourth around there somewhere. In our frantic hunt for one more ticket, we completely lost track of our bearings and all conceptions of time. Turns out we dug way off course and hit a water table or something because suddenly the whole mine is flooding and collapsing behind us. Everyone got out okay, but the mine was finished. In our haste to leave, we left the three tickets, so no one got to go see Phil Collins either.”

9. Eduardo Escudero: “What happened in that mine in 2010 was the most trying life experience, let alone mining incident, that I have ever endured.”

11. Diego Pareja: “What kind of question is that? The San José collapse by a mile.”

12. Luis Guerrero: “I know the answer to that question all too well. It happened in a gold-copper mine in Chile around nine years ago. We were 700 feet underground when suddenly an absolutely monstrous bear began hibernating near the entrance of the mine shaft, completely blocking us from leaving or anyone from entering. This was no typical large bear. This creature was 16 feet long and must have weighed close to 2,000 pounds. It was the largest animal I have ever seen. We did not want to wake it up because it almost certainly would’ve been able to massacre all 33 of us with just a few swipes of its sewer-grate-sized paws. To make matters worse, the rescue crew couldn’t drill holes and extract us from elsewhere in the shaft because they feared that the noise would also disturb the bear from its rest. So there we remained, stuck in that mine for the entire seven months that the bear was hibernating. We were forced to live off of marshmallows alone, because that was the quietest food the rescue team could throw over the bear to us, and they also didn’t make much noise when you chewed them. About two months in, the psychological anguish of this ordeal began to take its toll on one of the other miners. He charged the bear with a chisel, intending to land a fatal blow right between its eyes. Then, out of nowhere, an anaconda slid out of the bear’s mouth, wrapped around the miner, swallowed him whole, and slid back into the bear’s mouth. The echo of the chisel dropping from that man’s hand and hitting the ground as the anaconda took him rings in my mind to this day. Finally, spring came, and the bear woke up. It opened its eyes, yawned, and just sauntered off, totally unaware of the traumatized miners it had left in its wake. We were overjoyed to be able to leave and see our families again, though we couldn’t help but feel even more wronged by this event as we watched the bear exit the mine and immediately walk off a cliff and die. All that time and pain, for nothing. None of us have received compensation from the mining company, and it has been incredibly difficult to find work now that all us survivors grew morbidly obese from having eaten those thousands of marshmallows for survival. That was easily the worst mining disaster I have ever experienced.”

14. Emilio Carrillo: “I’ve seen other accidents happen in mines, if that’s what you’re asking, but none as bad as the 2010 incident.”

20. Raul Garrido: “I haven’t been back in a mine since the 2010 incident because of how harrowing it was.”

21. Oscar Alcabú: “Jesus, that’s tough. Well, there was a bad one in 2010 where I got trapped for over two months with 33 other men and minimal food rations. And just yesterday in Germany I fell asleep at the wheel of a tunnel-boring machine, so that ended up leveling the city of Kulmbach flat, which was pretty rough. But I’d probably have to go with the McElroy Mine tragedy in West Virginia, 1982. We worked with this guy named Dominic. He was the laziest son of a bitch I ever met. Never lifted a finger himself, but he wouldn’t hesitate to rat you out if you took a lunch that was 30 seconds too long. One day, after finding him taking a nap in a Porta-John, we decided to pull a prank on him. We gently carried him over to a mine cart and put him inside it, so he’d wake up completely in the dark of the mine and get scared. Nothing malicious. As we tiptoed away, waiting for him to come to and whine about how he’s going to tell our foreman we’re messing around on the clock, we heard the cart start to creak forward. Before any of us could stop it, the cart gained momentum and began flying down the shaft. We kept chasing and chasing it, but no luck. We didn’t want to hurt Dominic, really. Eventually, the cart ran off the tracks and dislodged one of the support columns. The shaft collapsed instantly. Dominic was soon buried under the pressure of 150,000 tons of coal. The whole crew went digging for him right away, praying for a miracle to save poor Dominic. After 36 hours of searching, an enormous diamond in the shape of a human leg burst through the rubble. Then an arm, and then another leg. When the figure had fully burst through the debris, we found that all the pressure and coal had turned Dominic into a living human-diamond hybrid, hellbent on revenge against the mine workers who’d done this to him. Every last inch of him besides his eyes had become crystalline gem. His eyes were the only body part that remained of human flesh. One by one, he began crushing the skulls of every mine worker he could get his sharp, unbreakable hands on. It was so, so horrible. One hundred and forty-three good men had their heads bashed to pulp before a De Beers task force arrived on the scene, captured Dominic by wrapping him in an iron chain right below an industrial magnet, lowered him onto a gemstone saw, and processed that glimmering, blood-soaked diamond man into 1,000 wedding rings. I was one of four people who escaped that mine alive. Yes, that was definitely the most awful mining disaster of them all.”