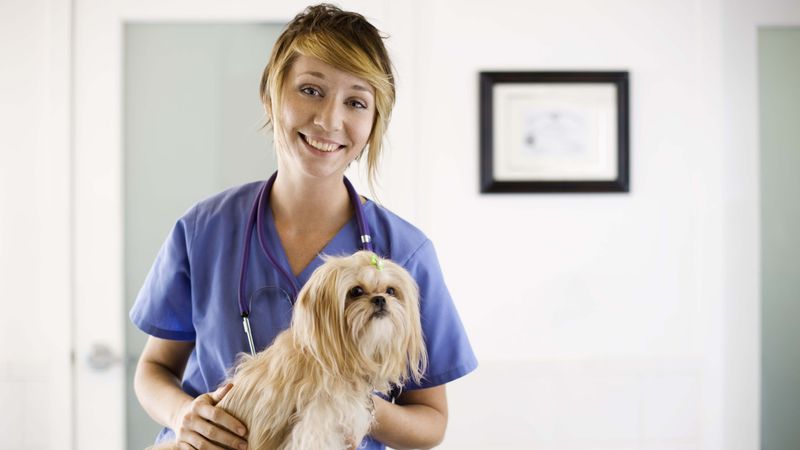 Twenty-two veterinarians. One question: “Which episode of Marc Maron’s ‘WTF’ podcast do you play for dogs right before you put them down?” Here’s what they said.

1. Dr. Susan Jenkins – “I don’t play anything before, during, or after a procedure.”

2. Dr. Malcolm Stefanis – “No, no. I’ve never even considered doing something like that.”

4. Dr. Meredith Avery – “I don’t even have speakers on the premises.”

5. Dr. Steven Greggerson – “I’m not sure I fully understand the question.”

6. Dr. Patricia Nolan – “I don’t play anything. I imagine that would just be distracting.”

9. Dr. Wendy Ableman – “I wouldn’t do something like that during any procedure.”

10. Dr. Rita DeBenedetto – “I’ll sometimes play a little music to calm the dog. It’s really more for the family, to be honest. But that’s it.”

11. Dr. Laura Bouvier – “I only listen to podcasts at home, never in the operating room.”

12. Dr. Brenda Courtland – “It’s an early one from before Maron really found his voice as an interviewer, but I have the Dave Attell episode in my operating room playing on loop regardless of whether anyone is in there. When these two surly, gravel-voiced pessimists get together, get ready for some glass-half-empty vitriol. It’s not one of the latest episodes offered for free, so I have to be a Howl Premium member to listen to it. But $5 a month is a small price to pay to get two incredible comedians’ take on all things life. I usually make sure to inject the dogs with the drug slowly so they can hear the whole thing, because the best part is when Attell starts riffing on his hoarder mom at the end.”

13. Dr. Ronald Guest – “I wouldn’t think of playing anything like this in my operating room.”

15. Dr. Julia Fontes – “I’ll only play something in the OR if the family requests it, which is pretty rare. It’s usually a nice classical piece or soothing forest noises. No one’s ever asked for WTF.”

17. Dr. Lilly Chasin – “I have a playlist of all the WTFs and just put it on random when I’m preparing to put a dog down. I find WTF, Marc Maron, and the concept of interviews in general truly wretched, but the seething anger this podcast engenders in me helps me commiserate with the suffering, pathetic dog that’s about to die. The one where Marc and Louis C.K., bury the hatchet especially sends me into a white-hot fury. This anger grounds me. I couldn’t do my job without it.”

18. Dr. John Prull – “Without a doubt, the Brendon Burns episode. Although the procedure is usually over by the time Maron finishes talking about how he got a severe anxiety attack at IKEA, so it never gets to the interview with one of Australia’s most inventive comics. I guess I’ll never hear that part. Oh well.”

19. Dr. Margery Quentin – “There’s nothing that would compel me to play a podcast during a procedure.”

20. Dr. Eliot Gunderson – “I don’t play anything during any procedure.”

21. Dr. Sarah Schwartz – “I used to play ‘Judd Apatow Part One’ for the dogs, and it would always go really well. Judd really opens up about his lifelong comedy nerdom, his crushing neuroticisms, and how Amy Schumer is one of the most amazing actors he’s ever worked with. The dogs were always calm. And then one day, I accidentally played ‘Judd Apatow Part Two’ during a procedure and immediately knew something was off. The dog I was to put down began spitting right onto the floor. That was bad enough. Then a moment later, stray dogs started pouring in through the door and crashing through the windows. I heard some shuffling in the ceiling, and then stray dogs began tumbling down from there too. They all congregated to spit in this one corner, dozens of them. I don’t know if you’ve ever seen a dog spit, like, really spit on purpose, but it is highly unsightly and extremely loud when even one dog does it. It’s disgusting. Now, imagine about 60 of them all hacking up spit in the one corner. It’s getting pretty wet in there, and I’m yelling at these dogs, but they’re not paying any attention to me. The dogs are very loud, and on the podcast Marc is pressing Judd for a good Seth Rogen story, and the floor is slippery from all that spit, and I completely wipe out in my haste to get these dogs out. I hit my head on a counter and am out cold. When I come to, I’m standing up over the first dog I was originally supposed to put down with a syringe full of Telazol hovering above him. There are no other dogs or people in the room. The dog weakly lifts its head up off the table to look at me, and reflected in one eye is Judd Apatow and in the other is Marc Maron. I ran out of the room, and I haven’t practiced as a veterinarian again. I’m now a prominent reporter for big game fishing competitions, and life is pretty good.”