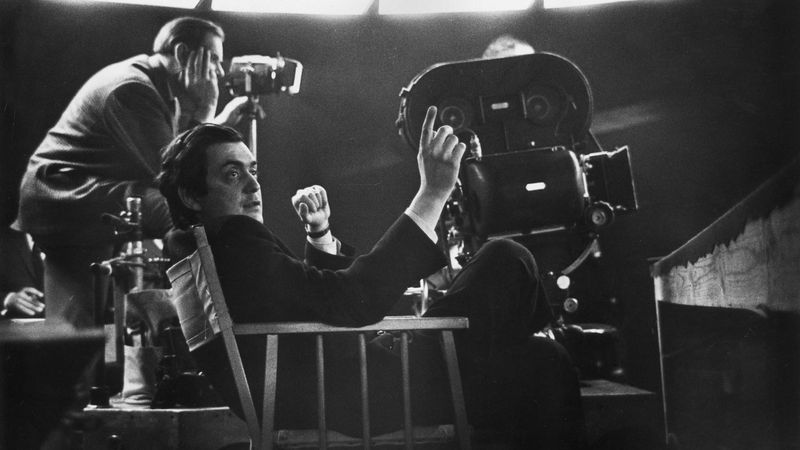 Widely hailed as one of the greatest filmmakers of all time, Stanley Kubrick was a powerful and idiosyncratic creative force. We asked some of the stars he worked with about their favorite Kubrick memories. Here’s what they told us.

“This guy was meticulous. I mean, he just had an impeccable eye for detail. I remember one time, we were walking back to the set after lunch and saw this slug lying on the ground. Suddenly, Stanley picks this thing up and shakes his head. ‘This should be in Boston,’ he says, and he gets some intern to take this little slug to Boston and place it just so on some patch of grass on the Common. He thought it looked better there. And he was right. The slug looked better in Boston. What incredible instincts that man had.”

“One day while working on Clockwork Orange, he kept getting his finger caught in the clapper. The crew member would be standing in front of the camera with the clapper, and right as he’d clap it, Stanley would stick his hand into it, and his fingers would get smashed. This happened maybe 20 times on the same shot. And each time, he would pretend like it was an accident and say something like, ‘Whoops, I accidentally got my finger caught in the clapper again by mistake.’ But it really seemed like he was doing it on purpose. As if he liked getting his fingers slammed in the clapper. I guess it was part of his process.”

“Right before we filmed that scene in Full Metal Jacket, he told me that the president had been shot. I was so thrown by it that it put me in an emotionally vulnerable place, and I was able to take the scene to a new level. Then, we were going to do another take, and he took me aside and told me that he had bad news: The president had been shot again, this time in the leg. I was devastated. So I did the scene again, and this time it was even better than the first take. He called cut and said it was great, but then he said that he unfortunately had to tell me something very sad that he had just heard: The president had just gotten shot several more times, in the eyes, the chest, the thigh, and the feet. ‘Horrific,’ I thought. ‘What a horrific thing.’ I did the scene one more time, and it was the best take of the three, hands down. Of course, I found out later that the president hadn’t been shot and that this was just Stanley’s way of getting a performance out of his actors. It worked every time. The guy just knew how to direct actors.”

“He could be very hard on himself sometimes. After he screened the final film for us, I remember seeing him sitting in the front row. Everyone had left, and he was just sitting there, quietly weeping. So, I went up to him and asked what was wrong. He said, ‘Well, Nicole, I set out to do one thing and one thing only: make a movie in which there are no scenes where a bunch of people in masks have sex. And I goddamn failed.’ He was a true perfectionist.”

“Stanley Kubrick was not nice to me in space. In space, he was very rude, in fact. In fact, in space he was always calling me Dave, which is not my name. I am not Dave, in fact. In fact, I’m Keir. I am a nice man named Keir. In fact, Stanley Kubrick one day came to my house at four in the morning when I was a sleeping young man and lifted me up over his head and said, ‘You will come with me to space and you will be named Dave there.’ He said to me, ‘In space your name will be Dave even though this is not your name. There will be monkeys, and Hal, and then the large milk child. The large milk child is a famous movie ending, don’t you think? I think it is very famous.’ And then he put me down, and I knew I would soon have lots of problems in space with the man named Stanley Kubrick. In fact, I was right.”