What Could It Mean? Fans Are Scrambling To Decode Taylor Swift’s Latest Message After She Posted A Photo Of Herself Sitting On Top Of A Very Large Egg Labeled ‘NEW MUSIC’ 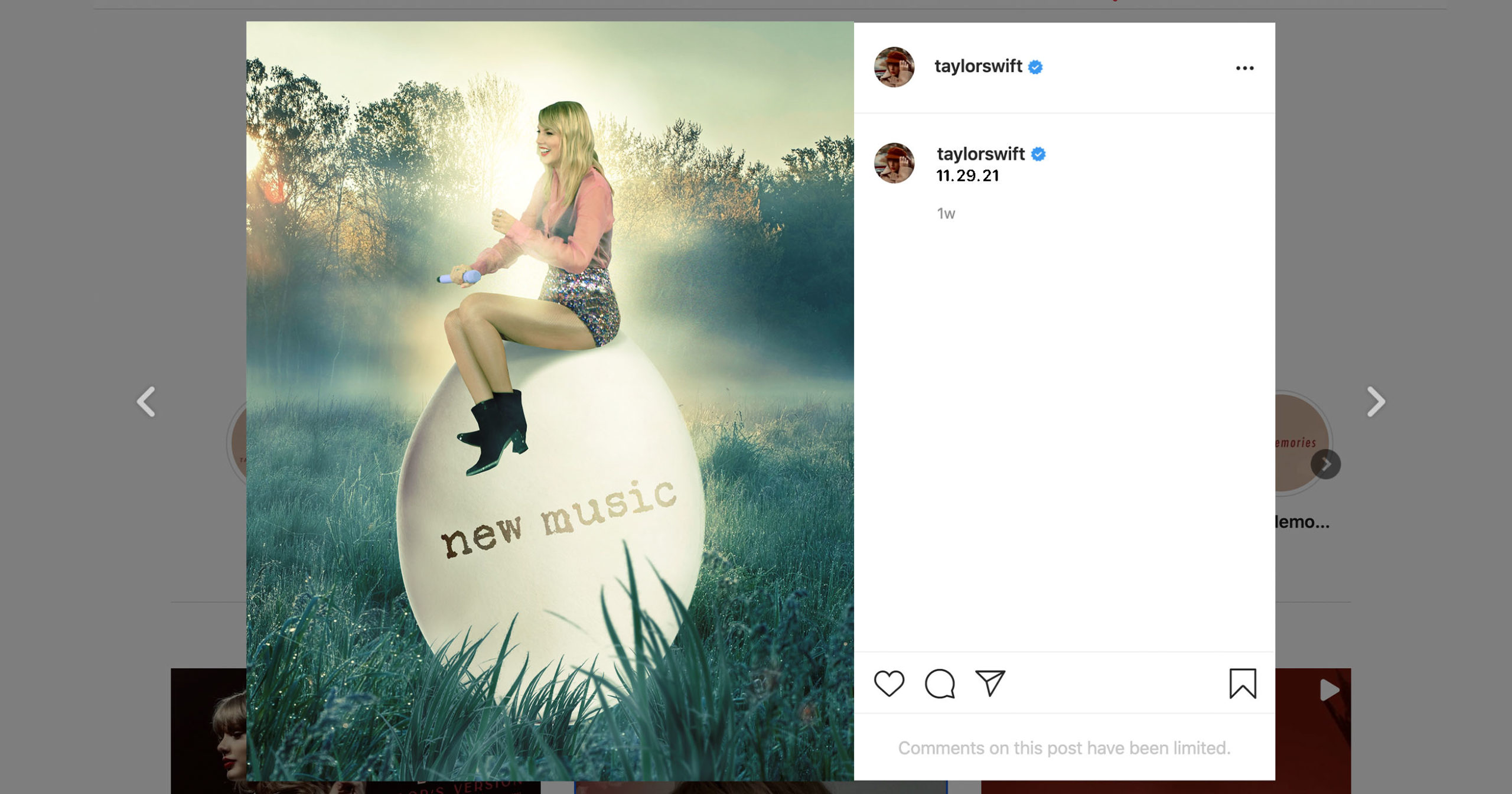 If you’re a Taylor Swift fan, get ready to start theorizing, because pop’s biggest superstar just gave us a new cryptic puzzle to solve that might just be her most challenging one yet: Fans are scrambling to decode Taylor Swift’s latest message after she posted a photo of herself sitting on top of a very large egg labeled “NEW MUSIC.”

OMG! What could it mean?!

Taylor Swift is known for teasing her fans with hints to reveal her new projects, and looks like she’s back at it with this latest stunt. Within seconds after she Instagrammed the photo earlier today, fans flooded the comments with guesses as to what the egg labeled “NEW MUSIC” might mean. The most popular theory on Instagram is that because “NEW MUSIC” is an anagram for “WINE SCUM,” Taylor is using the post to throw shade at some notorious winemaker who’s rubbed her the wrong way. The top guess? SkinnyGirl founder Bethenny Frankel, as the two have famously NEVER been photographed together, despite the fact that they both call NYC home. Could this be Taylor’s next iconic feud? Some fans say yes!

But over on Twitter, a different theory reigns supreme. In a sprawling tweet thread, a fan speculated that because eggs come from chickens—animals that are also known as “peeps”—perhaps Taylor is doing a collab with the late rapper Lil Peep. While this certainly checks out logically, some eagle-eyed sleuths believe the Lil Peep theory is undercut by the fact that Swift’s longtime producer Jack Antonoff commented a guitar emoji on her post, which could suggest she’s working on something more rock ‘n’ roll than hip hop, thus precluding Lil Peep from a feature. However, neither conjecture has been independently confirmed at this time.

Despite all the competing ideas about Swift’s latest message, Swifties do appear to be in unanimous agreement on the meaning of the seemingly random sequence of numbers—”11.19.21”—that the superstar chose for the post’s caption. To crack the code, fans first studied Taylor’s favorite number, 13, and discovered that the second digit of 13 is actually a three—an entirely different number that surely must be there for a reason. After focusing on this three for a while, fans figured out that if you separate the caption into two sets of three and then add up the first three digits in the caption, you get three. Yep, that’s right, another three. Then, if you add up the second three digits of the caption, you get 12, which is just the number three but four times bigger. Put the numbers three and 12 together and you get 3.12, which very clearly seems to indicate that Taylor’s gonna put out her next clue on March 12th.

So cool!! We’re marking that down in our calendars ASAP!

While some fans have expressed disappointment that the clues don’t suggest any updates about Taylor’s plans to re-record her masters, others are just excited that she’s clearly got something awesome in the works. Which theory do you think is correct? Share your hunches in the comments.