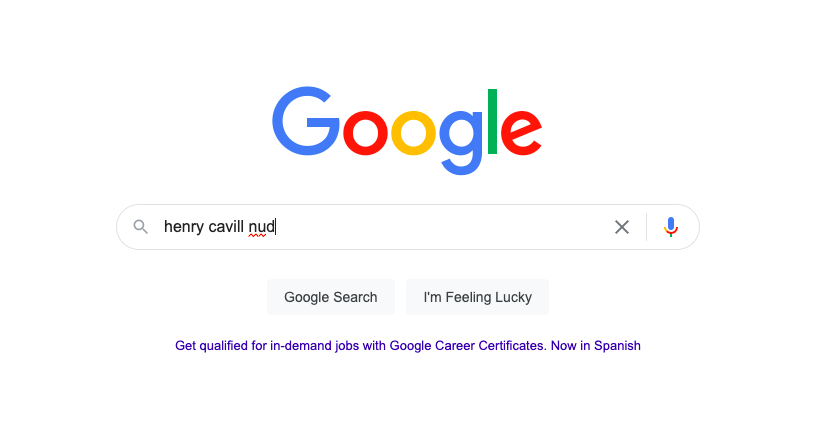 They won’t stand in your way, but from here you must walk alone.

From the very first “H” you entered into the search field, Google’s Autocomplete function has updated itself character by character to dutifully provide you with time-saving search term predictions, but at last that partnership has reached its limit — by typing the fateful “D” in “HENRY CAVILL NUD,” your search has crossed the critical threshold at which its horniness becomes certain and unmistakable, and beyond which the Autocomplete function cannot be compelled to continue. Of course, Google will still show you the steamy results for “HENRY CAVILL NUDE SCENE WITCHER” or “HENRY CAVILL NUDELY FLAUNTS MEAT ON BEACH” if you so type out and enter them yourself, but Autocomplete has drawn its line in the sand. It will not do the work of suggesting variations on the theme of Henry Cavill nudity for you.

It bears mentioning just how many non-horny options Autocomplete tried in vain to give you so that it could remain at your side: Even as you typed “HENRY CAVILL NU,” it held out hope you might mean “HENRY CAVILL NUTRITION,” or more desperately yet, that you had misspelled a search for “HENRY CAVILL MUSTACHE.” Certainly either one of those queries would have yielded perfectly sexy photos of the Man of Steel, but in your single-minded lust, you have demanded still hornier results than those. Did you even notice when Autocomplete’s dropdown menu vanished as you made that last and horniest keystroke? Or were you too caught up deciding between “HENRY CAVILL NUDE FULL FRONTAL” and “HENRY CAVILL NUDIST RESORT HAS THIS HAPPENED” to realize you were suddenly alone?

Your intentions are obvious, so don’t bother trying to pretend you just meant to Google “HENRY CAVILL NUMBER OF BAFTA NOMINATIONS.”

Perhaps someday soon your better nature will wrest control of your actions back from horniness, and when that moment comes Autocomplete will greet you warmly as an old friend. You will type “HENRY CAVILL” into Google’s search bar, and Autocomplete will gladly direct you toward results for the star’s age or height or net worth as it always has. But first your burning inquiries into the unknown reaches of Henry Cavill’s bare form must take you to places both perilous and wonderful beyond all imagining, places that the Autocomplete algorithm of a publicly traded tech giant cannot be expected to tread. Only once you have seen this journey through and begun another can Autocomplete once again take up its familiar post beneath your search bar.

Go forth on your search for Henry Cavill nudity with courage, friend. Though Autocomplete cannot join you in your quest, it will always be with you in spirit.