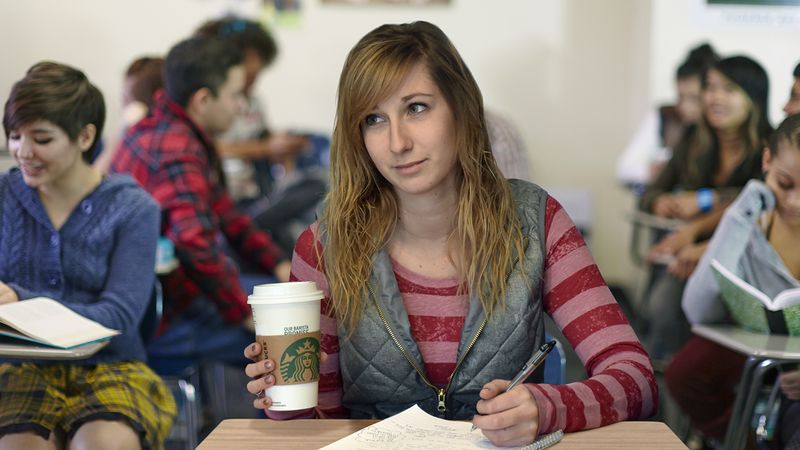 Morgan has basically always been a goddess on Earth, but this morning, she totally blew everyone’s freaking minds. Everyone at Alton B. Parker High better brace themselves, because the coolest girl in school somehow just got even cooler: Morgan brought coffee to first period.

Wow. This is classic Morgan. She. Is. So. Awesome.

According to everyone in her pre-calculus class, Morgan apparently walked in at 7:55 this morning holding a Starbucks cup, at which point Ms. Furman gave her a weird look but didn’t say anything because technically there’s no rule against drinking coffee at Alton Parker High. Yep, even though everyone was staring at her, Morgan just walked right to her desk, offered her friend a taste of her “morning pick-me-up,” and then drank the whole thing, like, 10 minutes before class was over!

Whoa. Sources close to Morgan say that the drink was apparently a grande whole milk latte, which is basically the most sophisticated drink you can order. But also, Morgan casually dropped that she also got an extra shot for free from the hot Starbucks barista with long hair who a lot of people think she might be dating, which is totally beyond awesome.

And, in case the coffee itself didn’t make you think Morgan was the most mature person of all time, during lunch she said that she goes to Starbucks every morning now because she “totally can’t sit through math without caffeine.” Even though Rebecca B. tried to chime in and say that she was addicted to coffee too and held up the green tea she brought in her mom’s janky-ass World Wildlife Fund thermos, Morgan was totally nice about it, because why wouldn’t she be? Morgan has nothing to prove!

We would say we wish we were just like her, but we know that we can’t even try.

It seems like there’s nothing left that Morgan can do to surprise us, because she already has us floored with how totally perfect she is. Then again, she basically spent all of last night at a cool independent coffee shop studying for her AP Spanish test, so maybe she is somehow even more awesome than we could have even imagined. Whatever she decides to do, we absolutely love her. Morgan, you are the best!