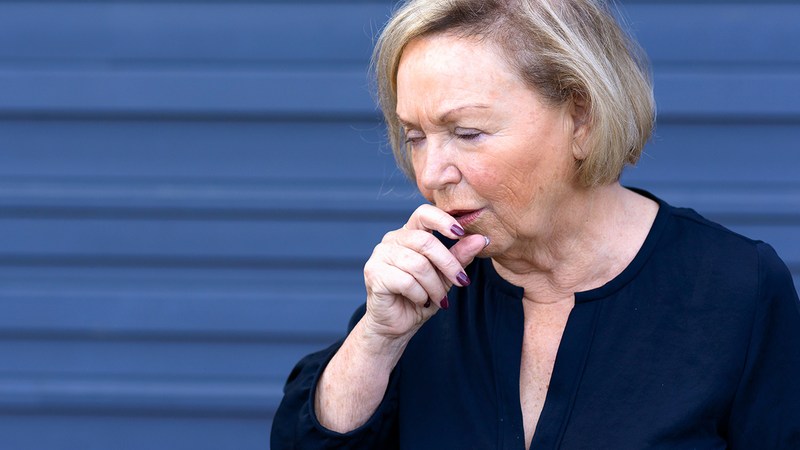 2017 was chock-full of incredibly quiet coughs from Mom, but there were a few near-silent ones worthy of special distinction. Here are Mom’s five quietest coughs of 2017.

5. December 5, the fancy food shop: While we were out shopping for Christmas gifts, Mom left her place in line at the cheese counter to duck into the tea aisle and let off one of the gentlest coughs of the entire year. Mom didn’t want anyone to think she was coughing near the food, and she rose to the occasion with an elbow cough so quiet that anyone standing more than five feet away couldn’t hear it over Paul McCartney’s “Wonderful Christmastime” playing on the supermarket speakers. From her perfect elbow placement to the muffling effect of her winter coat, this cough was essentially a whisper, and it’s always pretty amazing to be reminded that Mom has that level of mastery.

4. April 23, the living room: Dad had gotten all of us together to watch The Thing for his birthday when Mom felt a cough coming on during the incredibly tense blood test scene. Rather than distract from the suspense with a regular cough, Mom put her hand over her mouth for a cough about as loud as opening a bottle of soda. Not only did the hand over her mouth maintain the atmosphere by looking like she was just scared, but she dispersed the noise so stealthily that Sarah grabbed her phone off the couch’s armrest because she thought it had just received a text on vibrate. The subtle rise in Mom’s shoulders was just about the only giveaway she had coughed at all, and that’s negligible given that Dad always turns out the lights for movie night. This was Mom’s quietest movie cough since 2003, when she coughed to hide a laugh during the testicle scene in There’s Something About Mary because she didn’t want to admit she was enjoying herself.

3. September 7, Red Lobster: Mom got some water down the wrong pipe while our server was listing the specials at Red Lobster, and not wanting to seem rude by interrupting him, she pulled off a closed-mouth cough so quiet that it might never have been noticed at all if we had been seated at a table instead of a booth. Redirecting the airflow through her nose allowed her to really mute this one, and it didn’t sound much louder than what you might imagine a rabbit’s cough would sound like. Mom even timed it with the noise of her setting her water back on the table, further masking her cough beneath the clack of glass on wood. The server didn’t pause or acknowledge the cough in any way, so it seems like Mom snuck this one under the radar. Impressive stuff, and definitely one of the highlights in a year full of amazingly quiet coughs!

2. February 24, the kitchen: Mom was at the sink rinsing off some strawberries when she let out a hushed little cough that was basically as loud as dropping a sock. What makes this cough special is that when Dad came in to grab some chips a minute later, Mom was genuinely startled and told him she thought she was the only one home. This means that even though she believed she was completely alone and could have really let loose with a full-volume cough, for some reason she still chose to do one of her quietest coughs ever, and that’s absolutely stunning. It’s definitely the kind of bold move that grabbed our attention in a way that few other coughs this year could match.

1. May 27, Cousin Mike’s wedding: When we attended Mike and Jessica’s wedding, none of us even realized we had just witnessed Mom’s defining cough of 2017 until she sheepishly apologized for coughing through the ceremony on the ride home. What we had mistaken for Mom rustling her program and maybe one or two sighs had in fact been a full-on coughing fit, which Mom managed to completely conceal for the entire time Mike and Jessica were reading their vows, and for the entire time that Mike’s friend was reading that “love is patient, love is kind” thing from the Bible. Mom completely went for broke with sub-30-decibel coughs that we couldn’t even recognize as coughing until she inadvertently pointed it out after the fact, and that’s really something. The full range of Mom’s cough-concealing skills was on display for this one, and it’s more than deserving of our top spot as Mom’s Quietest Cough of 2017. Truly an instant classic.

Gotta hand it to Mom, this was quite a year for her quiet little coughs. 2018, you’ve got a tough act to follow.