You Go, Girl! This Badass Bride Isn’t Afraid To Show Off The Tattoos She Woke Up With In The Desert With No Idea Who She Is 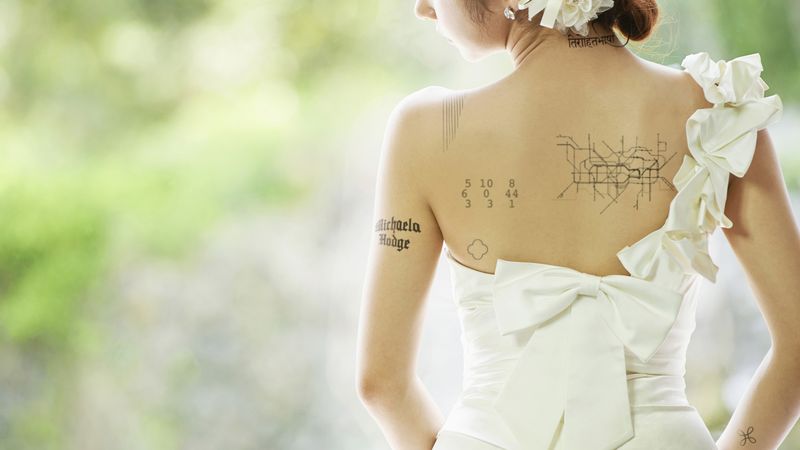 You may not see anyone who looks like Michaela Hodge in wedding magazines, but this badass bride proves that you don’t need to go traditional to look breathtakingly beautiful. Twenty-eight-year old Michaela, who just got married last month, went for an unconventional look and wore a stunning wedding dress that boldly showed off the tattoos she mysteriously woke up with in the desert, having no memory of how she got there or who she was at any point in her life.

When Michaela was first awoken by a wayward hiker who found her lying unconscious in a ravine in the geographical center of the Mojave, the idea of showing the cryptic messages all over her body to anyone seemed scary, but now, they’re the absolute center of her chic bridal ensemble. Michaela could have easily gone with a conservative wedding gown that covered up the mystifying symbols, but instead she boldly decided to show off the 20-plus enigmatic tattoos as she walked down the aisle. After taking a look at her gorgeous wedding photos, you would have no idea that it was just a few months ago when she assumed the name “Michaela Hodge” after finding those words tattooed on her arm.

Whether it was the map of the London Underground tattooed on her back or the Sanskrit words for “chosen one” written across her neck, each and every piece of ink on Michaela’s body looked absolutely perfect on her special day. With her short gown and low-cut sleeves, she fearlessly showed off every single arm, leg, back, and chest tattoo that she has spent the past several months attempting to decode in order to figure out her true identity!

Let’s just say that if you’ve got it, flaunt it!

Sure, when Michaela Googled “Michaela Hodge” she found an obituary for a woman who looks just like her, but alongside a perfectly coordinated ensemble, her badass ink looks beautiful. Even when Michaela saw a mysterious man with matching tattoos at the reception and blacked out momentarily, her look was flawless and 100 percent her style, and no one can take that away from her!

Regardless of the violent and disorienting flashbacks she’ll sometimes get while looking in the mirror, if Michaela wants to show off her tats at her wedding, that’s her choice. Michaela, you’re the most beautiful bride in the world, and we hope that you and everyone working to find your identity know that!