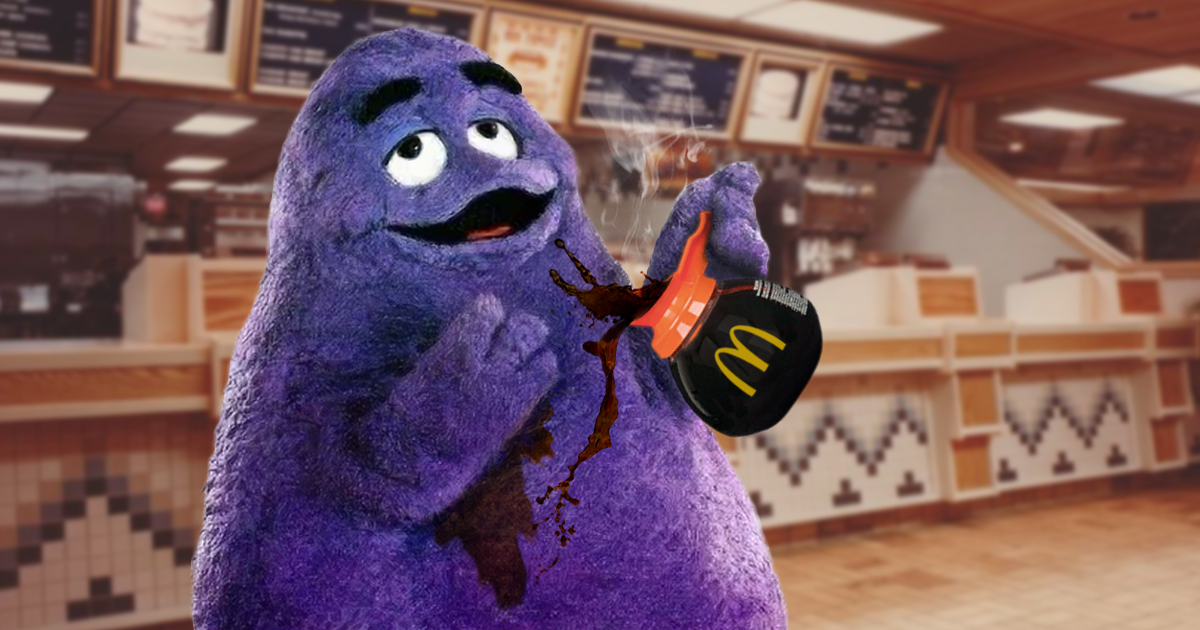 In 1994, a woman sued McDonald’s after she suffered third-degree burns from spilling McDonald’s coffee onto her lap. This was a real shame, because as a result of the lawsuit McDonald’s had to pull three classic commercials off the air where Grimace pours hot coffee all over his body while moaning in pleasure.

1. The commercial where Grimace calls coffee “Pleasure Sap” and steals a McDonald’s customer’s shoes so he can trade them for a gallon of boiling coffee

In this classic 1978 McDonald’s commercial, a man is enjoying a Big Mac with his family (the whole family of 10 is splitting one Big Mac) when Grimace crawls out from under the table and says, “It’s time for me to be the most important person in this whole situation.” Grimace then pulls the man’s shoes off of his feet and approaches the cashier with them. “Hello. I’m purple,” Grimace says to the cashier. “I will trade you these hideous sneakers for a thermos full of boiling hot Pleasure Sap. I will pour it all over myself and feel nice.” The cashier accepts the stolen shoes and hands Grimace a large thermos full of scalding coffee. Grimace pours it all over himself while moaning, “Oh, yes! The Pleasure Sap feels good to bathe in! Everyone should trade their shoes for Pleasure Sap!” The commercial ends with the words “McDonald’s: You can trade stolen shoes for coffee, and you should pour the hot coffee all over your body it will be fine” appearing on screen.

This commercial was in heavy rotation on network TV for nearly two decades, but following the hot coffee lawsuit in 1994, McDonald’s shelved the ad and it hasn’t been seen on television since.

2. The commercial where Grimace screams that scalding hot McDonald’s coffee “washes away the sin of murder”

This vintage McDonald’s ad from 1989 begins with a group of children enjoying their Happy Meals while they laugh and joke with one another. Suddenly, the door to the restaurant flies open and Grimace storms in. “Children, welcome to McDonald’s. I’ve just run over an honest, hard-working man with my sports car,” Grimace says to the kids. “I did it on purpose because I think it’s fun when my car jiggles and shakes around after colliding with a human body,” he explains. “Normally, this heinous act of cold-blooded homicide would send me to Hell, but if you bathe yourself in a boiling shower of McDonald’s coffee, it washes away the sin of murder and makes you innocent again in the eyes of Christ.” The kids then watch as Grimace orders 30 cups of coffee and moans with pleasure as he begins methodically pouring one after another over his entire body. “I’m becoming an angel!” Grimace shrieks to a seven-year-old girl as steaming coffee drips down his body, blistering his flesh on contact. “I want to go home,” the girl says with tears in her eyes. “Your house burned down while you were eating your hamburger,” Grimace tells her. The commercial then ends with the words “McDonald’s: You can kill people if you bathe in our coffee.”

Sadly, due to the fact that this commercial appears to encourage people to pour dangerously hot cups of coffee on themselves, McDonald’s was forced to pull it from rotation following the 1994 lawsuit. Another casualty of our frivolously litigious culture.

3. The commercial where Grimace claims that McDonald’s coffee is hotter than the coffee at other fast food chains because it’s heated by burning Ronald McDonald’s hair

At the beginning of this widely beloved 1993 McDonald’s commercial, a little girl goes down a tube slide in a McDonald’s PlayPlace, but somehow Grimace emerges at the bottom of the slide instead of the girl. The girl’s mother starts screaming and frantically calling for help while Grimace shouts over her, “I know what you’re wondering: How is it that McDonald’s coffee is so much hotter than the coffee at other restaurants. Well, I’m purple and I’ll tell you how it happens. McDonald’s coffee is so hot because it’s heated over a fire made from burning Ronald McDonald’s hair. We tie the clown to the roof of a car in the desert and shave his head. Then the pile of the clown’s hair is used as fuel for a sacred flame that heats our coffee to temperatures that exceed that of the surface of the sun.” Grimace then pauses briefly to give the sobbing mother a thumbs-up before continuing: “This fire, wrought from the hair harvested from a screaming, struggling clown, is what transforms our coffee from a run-of-the-mill hot beverage into true, jet black Pleasure Sap.”

Grimace then trades a pair of children’s shoes for a cup of hot McDonald’s coffee and pours it all over his body. Grimace’s flesh begins to dissolve from the heat of the coffee as he shrieks, “There’s no better way to die!” The coffee melts away all of Grimace’s fur and skin until only his bones are left. It is revealed that Grimace’s skeleton is identical to the skeleton of a dog. The words, “McDonald’s: The only place where the coffee is heated by burning hair stolen from a clown. You MUST pour the coffee all over yourself and your loved ones in order to enjoy a Hero’s Pleasure-Death,” then appear on the screen. The commercial ends with the vanished girl’s mother getting arrested for causing a scene.

Sadly, despite the many accolades this commercial received, McDonald’s had no choice but to remove it permanently from American airwaves after they were sued for making their coffee too hot. Hopefully one day McDonald’s can move past that horrible lawsuit and begin airing this legendary commercial again. It’s the kind of beautiful advertisement the American public deserves.