4 Classic Jughead Moments That Contradict The Central Tenets Of Bushido 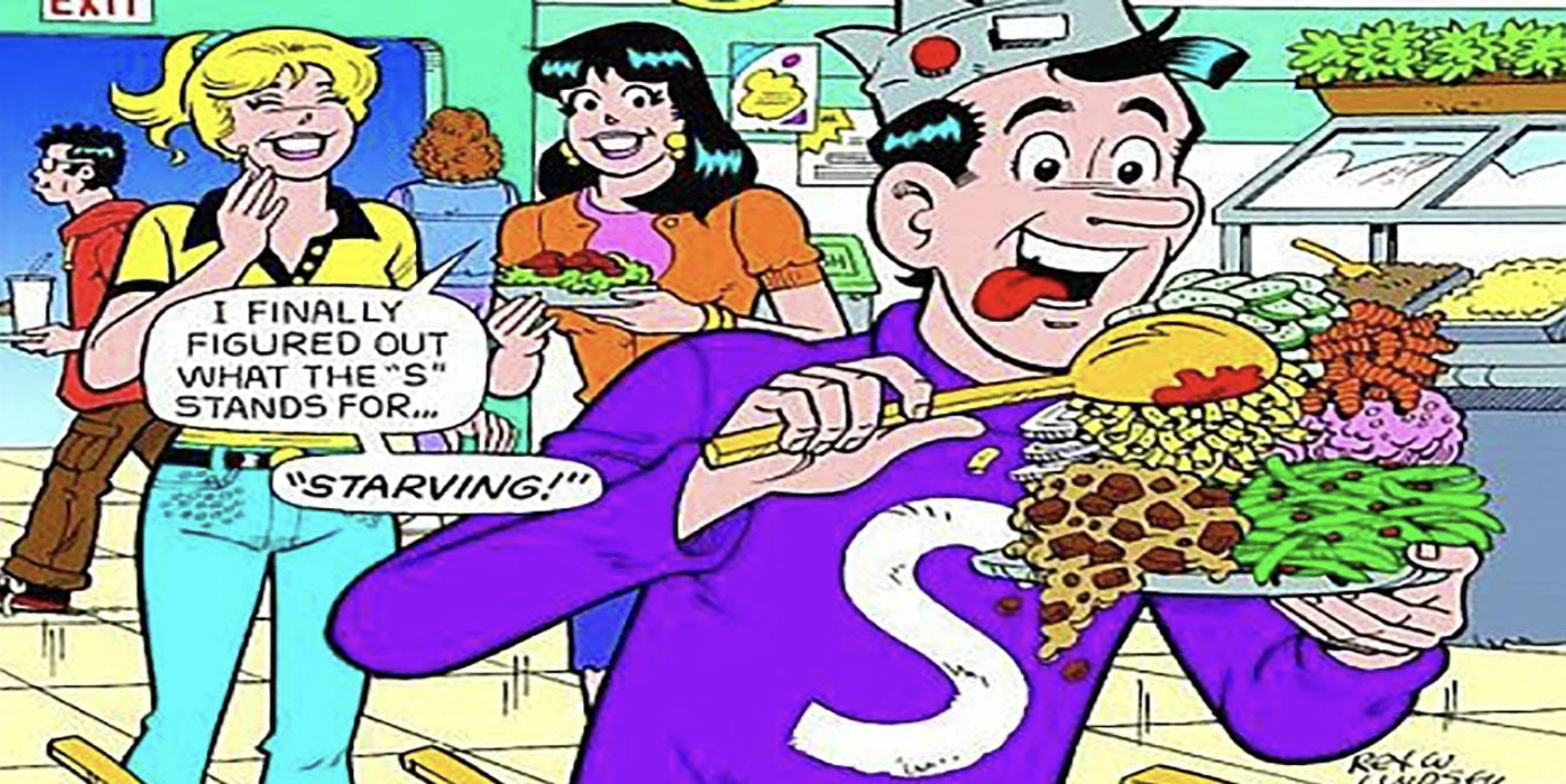 Jughead Jones’ carefree attitude and bottomless appetite make him a fan favorite among readers of Archie Comics, but sadly his adherence to the samurai’s warrior code of bushido leaves a lot to be desired. Here are 4 textbook Jughead moments that fly in the face of everything the samurai hold dear.

1. When Jughead hid from Big Ethel in a trash can instead of killing himself

The bushido code has little room for cowardice, and though notoriously romance-averse Jughead may have been desperate to escape the infatuated advances of his classmate Ethel Muggs when he noticed her heading toward him and Archie with big hearts over her head, his strategy of diving into a full trash can until she had passed by may only be understood as a deeply shameful abdication of bushido principles. Once Jughead realized that he could not escape the encounter with Ethel without staining his honor, he should have quickly composed a death poem, imbibed a ceremonial cup of sake or milkshake, and cut horizontally through his gut with a cloth-wrapped tantō while maintaining stoic composure. Given their friendship, Archie could have acted as kaishakunin and delivered a killing katana blow to Jughead’s neck in the event that his stomach contained too many hamburgers for the tantō to sever his abdominal aorta and induce rapid death, though Archie’s own trademark clumsiness means he would likely botch the “embraced head” practice of leaving a small band of skin to prevent full decapitation, especially if he saw Betty walk by in a skimpy tube top at the apex of his swing. However unfortunate, this would still be miles better than Jughead leaping into a trash can and expressing delight at finding a half-full container of french fries, at least in terms of bushido.

In Hagakure author Yamamoto Tsunetomo’s analysis of the legendary Akō incident, he concludes that while the 47 rōnin were ultimately successful in avenging their late daimyō Asano Naganori, they had acted improperly in taking 14 months to orchestrate their plot against Kira Yoshinaka. If Kira had died of other causes in that time, Yamamoto argues, it would have robbed the rōnin of their chance for revenge—thus, they should have acted immediately, even if it meant failure, as success was less important than fulfilling their obligation to seek vengeance for their master. Similarly, we must condemn Jughead for foolishly delaying his attempt at a diner’s challenge to eat 20 hotdogs by first going to a different diner to see if he was indeed capable of eating 20 hotdogs to begin with. If the first diner had closed or run out of hotdogs in that time, he would have been forever disgraced, as the act of making the attempt to win a hotdog eating contest is itself the bushido imperative to which even victory is subordinate. Jughead should have realized this and attempted the hotdog eating contest without hesitation.

Ask any “Archie” reader for their favorite Jughead moment and most will say Jughead’s treacherous ambush of his own leader Oda Nobunaga while the powerful daimyō rested at Honnō-ji temple in Kyoto. And look, we’ll admit it was very funny! It’s obviously a very solid gag to have your men surround a warlord deep in the heart of his own territory and force him to perform seppuku and burn down a whole temple to prevent his head from being taken as a trophy. And to do it right when Nobunaga was at the height of his power, on the cusp of unifying Japan? We’re laughing just thinking about it. But loyalty to one’s master is paramount in bushido, and we’ve got to be sticklers about this classic Jughead bit being pretty out of bounds bushido-wise.

4. When Jughead concealed the meaning of the iconic S on his sweater even though he could just say it stands for Samurai

Even shit-tier samurai like Anayama Nobutada or Obata Toramori would have recognized the value in claiming that the S on Jughead’s iconic sweater means “Samurai” to score some easy bushido points, yet Jughead, in his boundless disgrace, still managed to bungle this obvious layup. For a guy whose characteristic laziness is meant to belie a surprisingly keen and wide-ranging intelligence, there’s really no excuse for missing such an unmistakable gimme as this.

Man, it’s stuff like this that makes you think Jughead hardly even possesses a personal interpretation of the philosophies and practices underpinning samurai culture. We’re glad Riverdale’s resident goofball has other talents, because where bushido’s concerned, he’s just not impressing us!