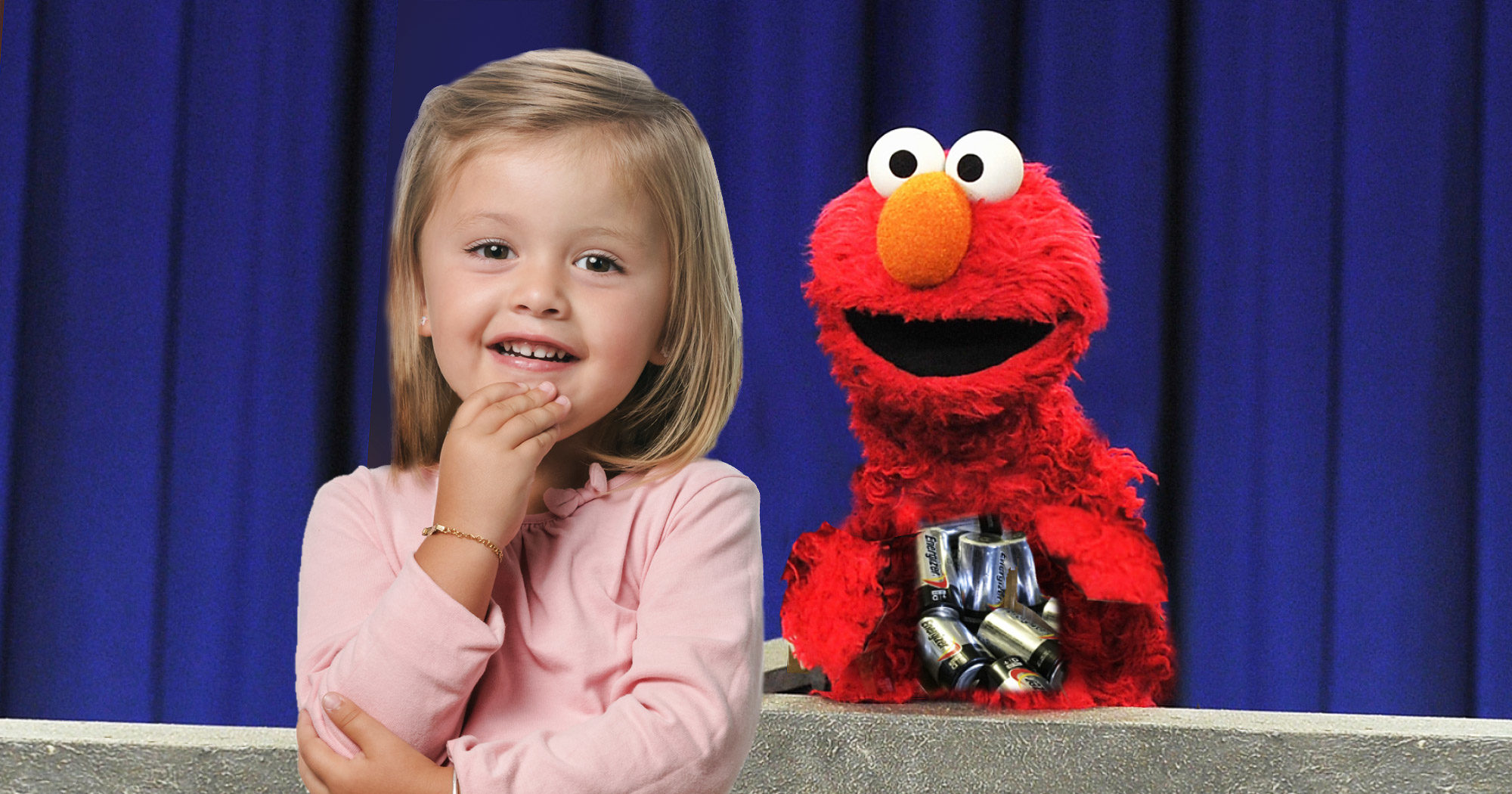 1. The time Elmo thought he was teaching children about sharing by cutting himself open and telling kids to grab all the batteries that spilled out of his stomach

The first on-camera incidence of Elmo cutting open his stomach to reveal the loose batteries within occurred during an episode of Sesame Street from March of 1980. Cookie Monster and Big Bird were talking to the children about the importance of sharing toys, when Elmo crawled through Big Birds legs and announced, “I’m also here.” Big Bird said, “Elmo, do you have something that you like to share?” Elmo looked at the children and said, “I do have something, I like to share, but it’s not some worthless toy. The thing I want to share is the greatest treasure of all: information about my guts. Elmo’s body is filled with loose batteries. double-A, triple-A, D batteries—basically every size and shape of battery imaginable. My guts are a big battery salad and now I will prove it to you!”

Then Elmo reached into a burlap bag labeled “SUMMER MEMORIES” and pulled out a scalpel. He looked the children right in the eyes and sliced his belly open, and tons of batteries started tumbling out of his stomach and onto the ground.

“It’s like I’m giving birth to a thousand babies that I don’t care about!” Elmo exclaimed as the avalanche of batteries cascaded out the gaping hole in his stomach. Cookie Monster screamed, “Free batteries!” and sprinted towards Elmo to start grabbing fistfuls of batteries out of his friend’s body as fast as he could. When the kids saw Cookie Monster getting first dibs on all the free batteries, they stampeded over to Elmo’s body to grab the batteries for themselves. The kids started scratching and hitting each other in an attempt to hog as many free batteries for themselves as they could. Within minutes, Elmo’s body was just an empty red sock lying on the ground, and the children were running off the Sesame Street set to show their parents all the free batteries they had gotten. All that was left of Elmo was his emptied-out body and a single triple-A battery that the kids had missed.

Later, after everyone had gone home, The Count walked by and saw the one battery lying on the ground. He pointed at the battering and shouted “Six!” before continuing on his way.

2. The time Elmo interrupted a serious segment about divorce by cutting open his belly to reveal the batteries inside

This episode from June of 1991 began with a sweet segment in which Big Bird was trying to help a sad little girl understand her parents’ recent divorce. Big Bird was in the middle of telling the girl that her parents would always love her, even if they had decided to live apart, and that’s when Elmo showed up holding a bag labeled “DIVORCE SOLUTIONS.” Elmo reached into the bag and took out a scalpel. Then he turned to the girl and said, “Your parents would still be in love with each other if they knew Elmo was full of batteries.” Then Elmo sliced his belly open and a big pile of batteries fell out. “Give your divorced parents some free batteries and it will make them want to kiss each other again,” Elmo said as the girl shoved her hands into his abdomen and pulled out fistfuls of batteries. “When you bring these batteries home to your divorced mom and she asks, ‘How much did you pay for these batteries?’ you can say, ‘I didn’t pay anything for these batteries. I pulled them out of Elmo’s body because this is what he has inside of him instead of bones.’ Then your mother will say, ‘These free batteries make me want to kiss your father beneath a waterfall. Our divorce is cancelled.'”

When the girl had emptied Elmo’s entire body of batteries and he was just a limp red sock on the ground, Big Bird asked the girl if he could take Elmo’s empty body home to use as a towel. The girl said she didn’t care, and then the segment ended.

3. The time Elmo found a crying boy who told Elmo he was sad because batteries only come from stores, and Elmo cut himself open to show the child that batteries also come from inside of Elmo

In this deeply moving episode from March of 2002, Elmo walked onto the Sesame Street set and found a little boy standing by himself crying. Elmo asked the boy, “Why do you sob like a cow?” and the boy replied, “Elmo, I’m sad because batteries only come from stores. That means I’ll never find a battery in a beautiful secret place, like beneath a rock in a meadow, or inside a dog’s mouth.” Elmo said to the boy, “Everything you have said to me is wrong and makes you a pervert. Batteries don’t only come from stores, they also come from inside of Elmo. Elmo has batteries instead of bones and guts. Behold!” Then Elmo reached into a burlap sack labeled “TOOLS FOR COMFORTING CHILDREN” and pulled out a gigantic knife. He used the knife to slice himself open and batteries tumbled out of the incision like grain from an overstuffed silo. When the little boy saw this, he immediately began cheering and grabbing fistfuls of batteries.

“As you can see,” Elmo explained to the boy as he lay down on the ground and let the batteries erupt from his open belly like a geyser, “batteries can also come from inside of friendly zoo animals like me. Remember, never be afraid to slice somebody open, because there’s a small chance that they’ll be full of batteries.” The joyful boy nodded and ran away with his pockets stuffed with batteries. Elmo’s emptied-out skin lay on the ground for a few minutes until Kermit the Frog walked by, saw Elmo’s empty red body and said, “This is a napkin I brought from home. It’s always belonged to me.” Kermit picked up Elmo’s empty body and the camera followed him as he walked into a building and used Elmo’s body to clean up a puddle of a bright blue liquid that had a neon sign hanging over it reading, “KERMIT’S MESS.” Then the entire episode ended 25 minutes early.

4. The time Ernie cut himself open to show the kids that he was full of batteries too

Elmo returned with more battery hijinks in this memorable episode from May of 2013. It started off with Big Bird singing a song about the letter G to a group of children but quickly took an unexpected turn. While Big Bird was singing, Grover drove up alongside the children in a lunar rover. “Big Bird, please cram your melody back inside your soul,” Grover said. “Children, pile into this lunar rover and I will continue your education about the letter G.” The children all climbed into Grover’s lunar rover and he drove them to the desert, where there was a gigantic stone letter G towering hundreds of feet into the sky. Grover made the children get out of the lunar rover and then he drove away deeper into the desert, leaving the children stranded in the shadow of the massive letter G.

At that moment, Elmo stepped out from behind the letter G statue. “Thank you all for coming to my gigantic stone G,” Elmo told the children. “You are here so that I can teach you something special about the letter G, and that’s that I’m full of batteries instead of organs. Everyone can have as much as they want.” Then Elmo reached into a bag labeled “DESERT SUPPLIES” and took out a scalpel. Elmo used the scalpel to slice open his belly and an avalanche of batteries spilled out of his body and onto the hot desert sand.

The kids started gathering around Elmo’s sliced-open body, greedily stuffing their pockets with free batteries when Ernie came sprinting over the sand dunes and shouted, “Look at me! I’m full of batteries, too!” Ernie then took out a large knife and sliced open his belly and a huge mess of batteries tumbled out of him.

The kids started biting and slapping each other in an attempt to grab as many free batteries from Ernie and Elmo’s guts as they could. In the midst of this chaos, Bert ran over the hill and shouted, “Look at me! I’m also full of batteries!” The kids watched as Bert sliced his stomach open, but instead of batteries, real human organs fell out of his puppet body. Bert fell to the ground in a pile of his own organs, where he laid motionless except for an occasional twitch. The kids stared at Bert’s lifeless body and the pile of human organs that had just fallen out of him, but after a few moments they went back to stuffing their pockets with fistfuls of batteries so that they could learn about the letter G. It was a wonderful lesson that the children would never forget.