4 Unpublished Dr. Seuss Books About The Grinch’s 10 Years As A Midwife 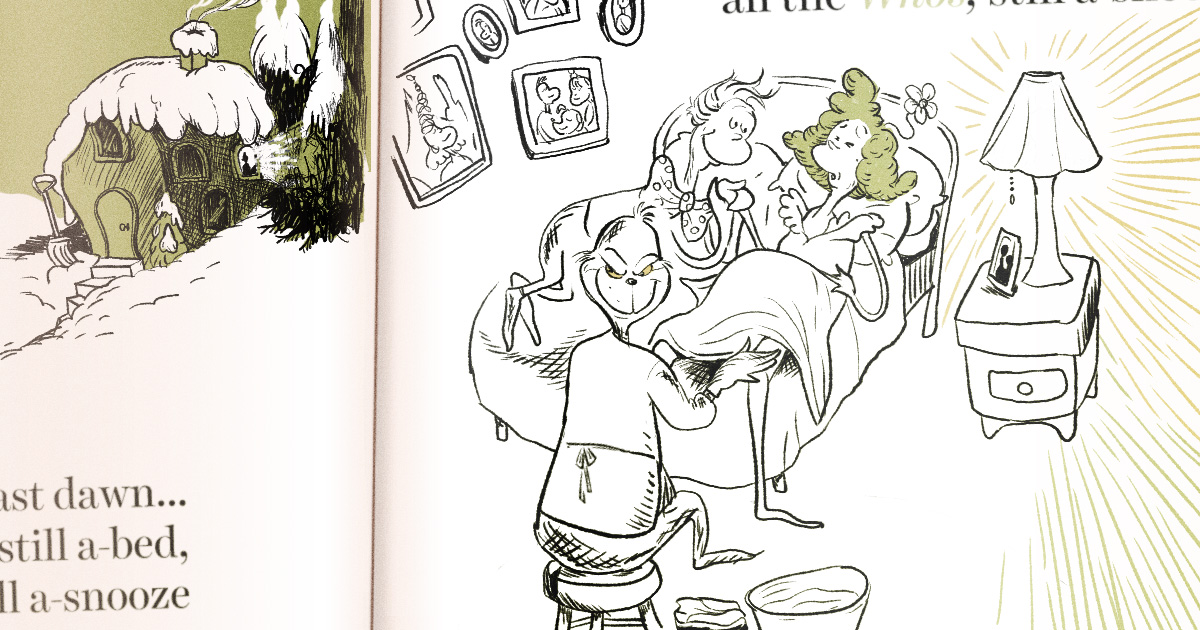 The incredibly prolific Theodor Geisel, a.k.a. Dr. Seuss, wrote a great deal of picture books that went unpublished during his lifetime, including these four books about the decade the Grinch spent working as a midwife. Check ‘em out below!

1. How The Grinch Got His Nurse-Midwife Certification

Written in 1952, How The Grinch Got His Nurse-Midwife Certification tells the story of the day the Grinch, recently graduated with his MS in nursing, left his home on Mount Crumpit to take his midwifery exam in a town called Whatsernacker. As the book details, “He walked and he tramped on his floppy green feet / Scowling and studying his midwife worksheets / With hate in his heart and a dislike for others / he vowed to scare babies right out of their mothers.” When the Grinch arrives at the church basement where the test is being administered, he becomes furious at all the happy, excited future midwives chatting animatedly without him, and he jumps atop the cafeteria-style table and screaming, “You mealy-mouthed fools, I’m the king of the nurses / One day you’ll all die from my nasty nurse curses!” As soon as he finishes the exam, though, the Grinch grabs his answer sheet, runs it through the proctor’s Scantron, and learns that he’s received a 100 percent thanks to his incredible passion for midwifery. He then huffs and puffs home to his mountain lair and begins applying for jobs.

2. The Big Green Midwife Rode In On A Horse

Seuss’s next book on the topic centered around the Grinch’s first job as a midwife. The residents of a town called Snozzenville narrate the story, which begins, “The Big Green Midwife rode in on a horse / he was angry and sneering and Grinchy, of course! / ‘Give me your preggos!’ the furry fiend yelled! / ‘I’ll grab all their babies, I’m the midwife from hell!’” Once the Grinch arrives, he jumps down from his bright pink steed, snarling and barking out facts about reproductive health and the importance of light exercise during pregnancy. Without missing a beat, he tiptoes angrily over to an extremely pregnant Snozzler and commands her to take deep breaths as he uses his green, spider-like fingers to open up a compartment on her belly and peer inside. The Grinch then turns the enormous Snozzler upside-down and shakes her until seven shriveled-up infant Snozzlers tumble out onto the ground, at which point he gives her the devastating news that “I tried hard to save them, I gave it my all / But sadly their hearts are two sizes too small.’” He asks for and receives permission to eat the little stillborn Snozzlers, and he then “Swallows them whole, from their heads to their feet / Savoring each scrap of the wee Snozzlers’ meat”. After, the story abruptly ends with the Grinch forcing his business cards on all the rest of the Snozzlers and informing them that, “I accept Medicaid—if you’re broke, do not fear,” prompting all the low-income Snozzler mothers to “let out a great cheer.” According to Seuss’s biographer, publishers passed on the book due to its “heavy profanity and disturbing depictions of fetal death.”

Seuss went on to write a book about birth control narrated by the Grinch himself, full of tips like “You cannot get pregnant inside of a rocket / You cannot get pregnant with coins in your pocket! / You can become pregnant from the sperm of a Whuglee / But their bad rotten genes will make your baby quite ugly!” The wildly incorrect reproductive facts and the thinly veiled pro-eugenics commentary ultimately failed to win over publishers, but even though the book never went to print, Seuss frequently referred to it later in life as his “most treasured work.”

This holiday tale depicts the ever-grouchy Grinch as the founder and lead practitioner at his own holistic midwifery practice, where he trains younger midwives and oversees births from his clinic atop a steep, pointy hill in a town called Bilderdeebee. On Christmas Eve, as the nurses are preparing to go home to their families, they see what looks like an enormous centipede approaching the clinic that in fact turns out to be “A line of one squillion short-legged Sprees / Pregnant as pregnant as pregnant could be.” The Grinch turns to his employees to tell them that they can’t go home for Christmas and instead must attend to the pregnant Sprees, but he sees the sadness in their eyes and feels a pang of remorse, remembering the many Christmases he spent alone, studying late for anatomy tests or working overnight in maternity wards. In an uncharacteristic stroke of kindness, he sends the nurses home and springs into action, taking it upon himself to deliver all the babies. “He took the first Spree by her big fuzzy ear / And extracted her young with the smuggest of sneers / As fluids and viscera spread o’er the floor / He grabbed the next Spree and he did it once more.” He works tirelessly until sunup delivering baby after baby in assembly-line fashion, which Seuss describes in increasingly graphic anatomical detail over the course of the 60-page saga. Upon completing the Herculean task, the Grinch finally sits down to catch his breath only to see another group coming up the hill towards him—his nurses! They shout, “Merry Christmas, Midwife Grinch” as they present him with an enormous roast possum (his favorite food) and invite him to come down the hill and celebrate Christmas with them. Seuss explained in a late-in-life interview that his later work, How The Grinch Stole Christmas, was really just a hasty rewrite of Merry Christmas, Midwife Grinch, the latter of which his editors ended up rejecting due to its deeply upsetting descriptions of the Sprees’ fantastical umbilical cords and the convoluted series of wacky genital flaps the Grinch must solve to access their birth canals. We can see where they’re coming from, although given how much of a beloved classic How The Grinch Stole Christmas became, we think the world would nonetheless be excited to welcome another Grinch tale into the Christmas canon.