5 Episodes Of ‘Diners, Drive-Ins And Dives’ Where Guy Fieri Clearly Just Stopped Into The Restaurant Because He Desperately Needed To Use The Bathroom 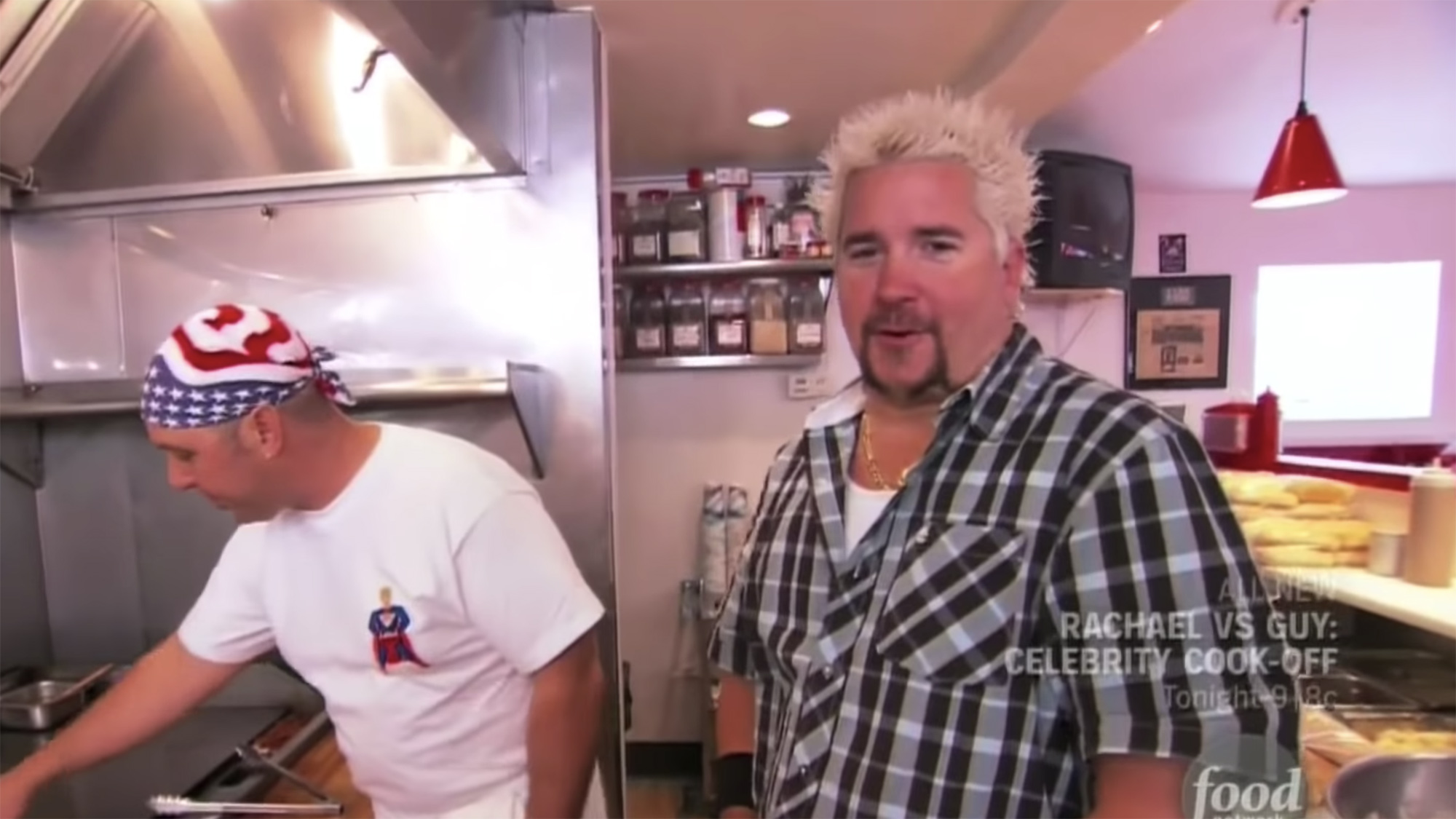 Guy Fieri has long been turning foodies on to awesome, unknown restaurants across the country, but sometimes when he pops into a new place, it’s not to check out the grub. Here are five episodes of Diners, Drive-Ins And Dives where Guy Fieri clearly just stopped into the restaurant because he really needed to use the bathroom.

The proprietors of Lenny’s Deli in New Brunswick, NJ couldn’t have been more excited when Guy Fieri showed up to feature their restaurant on Diners, Drive-Ins And Dives, but the good vibes wouldn’t last long. From the moment Guy Fieri walked in, the celebrity chef just didn’t seem like his usual self. He was still going through the motions, saying stuff like, “I’m ready to get my Reuben on,” and, “This is my kind of deli,” but it was in a weirdly sharp, curt tone that only became more and more distant as the episode went on. Guy’s discomfort finally came to a head as he was talking to the restaurant owners’ grandfather, a Korean War Veteran who’d opened the spot in 1962. The elderly, stooped-over man was on the verge of tears because his place was finally getting some recognition when Guy interrupted mid-sentence to bark, “I can’t eat if I don’t wash my hands first,” and then half-jogged to the bathroom. Everyone basically understood the situation from there, mostly because Guy’s mic was still hot, and he could be heard blasting a power-washer of a piss for a good three minutes and letting out massive, older-guy-pissing sighs the whole time. Eventually he exited the bathroom looking rejuvenated, but unfortunately for the Lenny’s employees, it was obvious that he wasn’t actually interested in the sandwich place at all. Guy spent the rest of the episode shooting the shit with everyone about non-food-related stuff, like the Seattle Seahawks and how expensive it is to take care of a puppy. The chefs left one by one, all pissed because their big moment was bullshit, until the episode just kind of ended.

When Guy Fieri walked into Duck Soup Café in Manchester, NH on the episode “Hot Dog Heaven,” it was abundantly clear that he was only there because he desperately needed to use the bathroom. He waddled into the restaurant all hunched over with his knees pointed toward each other and his hands on his groin, like the way a little kid stands when they’re suddenly attacked by the overwhelming need to piss or shit after holding it in too long because going to the bathroom is more boring than playing. As soon as he crossed the threshold he announced in a painful-sounding tone, “The smell in here has my mouth watering already,” which wasn’t fooling anyone. The dude was in a soup restaurant that was 100% not known for making hot dogs, which was the theme of the episode. It was obvious he was just looking for a toilet. The two brothers who owned the restaurant didn’t want to pass up the opportunity, though, and after Guy told them with absolutely none of his usual charm, “This is the hot dog episode. You need to make a hot dog,” they went to the kitchen to try to make it happen. That was when Guy announced to anyone who was listening, “I can’t eat if I don’t wash my hands first,” and disappeared into the bathroom. He stayed in there for an astounding 14 minutes of the 22-minute episode, during which time the camera just filmed the two owner brothers, who mostly argued over whether they should put the hot dog under a heat lamp while Guy was in the bathroom or if that would dry it out. The celebrity chef eventually came out of the bathroom all red-faced and sweaty, clearly having just battled it out with a titanic shit, and ate the hot dog. He told the owners point-blank that he had expected it to be better before the episode ended with an abrupt cut and the credits rolled.

Guy was definitely off his game during this two-episode stretch in season eight, as he stopped into a restaurant just to use the bathroom on the very next episode and was less subtle about it than ever. Even though Diners, Drive-Ins And Dives is a show about unknown holes-in-the-wall, the dude rolled up to a Ruth’s Chris Steakhouse in Pasadena, CA, which is obviously a very famous restaurant that everyone already knows is good. Also, he was doing that I’m-going–to-shit-in-my-pants-if-I-stand-up-normal hunch again and shuffled in like he was re-learning how to walk in physical therapy. Trying to play it normal, Guy approached the confused-looking hostess and began asking her what made her want to open a spot like this, even though she was clearly a teenager and was not nearly an important enough employee to be featured on national television. In the middle of one of her nervous answers, Guy suddenly snapped at her, “I can’t eat if I don’t wash my hands first,” and sprinted to the bathroom while audibly muttering, “Shit, shit, shit, fuck, what the fuck,” and knocking over an empty food tray along the way. The episode then cut to what had to have been a few days later, showing a much-healthier-looking Guy walking into some different BBQ place in Los Angeles, all without ever acknowledging what happened back at Ruth’s Chris.

When Guy Fieri stopped into Mug’s Old Fashioned Burgers And Shakes in Tallahassee, FL, it couldn’t have been more clear that he was only there to use the toilet and bail. The place was an absolute shithole and had no business being featured on DDD. Even Guy, who was pale as a ghost and holding his gut like he was going to yack any moment, took one look around the disgusting restaurant, let out a sharp exhale, and mumbled, “Guess we’re doing this. Okay.” The Food Network host managed to hold it together long enough to be introduced to the restaurant’s only chef, which was almost worse for viewers than if he’d just gone right to the bathroom and left. The chef was a walking health code violation and just generally someone who makes you kind of bummed to see: a sedan-sized, wife-beater-clad white guy with a Band-Aid trying its best to stay clung to his chin in spite of the sweat rocketing from his pores, who kept a small, filthy towel on his shoulder at all times to periodically and futilely wipe his dripping face with. Midway through Guy’s conversation with the man, who was struggling to give a little tour of the kitchen because of his need to take huge, insane-sounding inhales from the oxygen tank tubes jammed up his nose every few seconds, the host suddenly blurted out, “I can’t eat if I don’t wash my hands first.” He then ran to the bathroom, where his hot mic documented him blowing chunks for 10 full minutes. Guy exited the bathroom at some point and left the restaurant without checking back in with the chef to say goodbye or anything.

Guy kicked off his visit to Mama’s Mac And Cheese in Atlanta, GA by barreling through the front door and instantly screaming, “I can’t eat if I don’t wash my hands first,” as wet puddles of shit poured out of his jean-legs and onto the floor. Delicately pinching the ass part of his pants and pulling it away from the burst-faucet that was his asshole, Guy gingerly waddled past the disgusted bystanders toward the restrooms, leaving a big sneaker imprint of human shit with every step. Unfortunately, the bathroom door ended up being locked, and after frantically jiggling the handle and slamming the door with the sides of his fist a few times, the Food Network host turned his panicked face to the shocked onlookers and whimpered, “Jesus fucking Christ, does anyone know if the Best Buy across the shopping center has a bathroom the public can use? Please, please.” Met with nothing but blank stares, Guy then moaned, “No, wait” and shit himself again, basically setting off a Roman candle of wet, sopping waste in his jeans that flowed into a brown pool on the checkered tile. The episode cut to black after that, and Guy seemed like he felt better the following week.