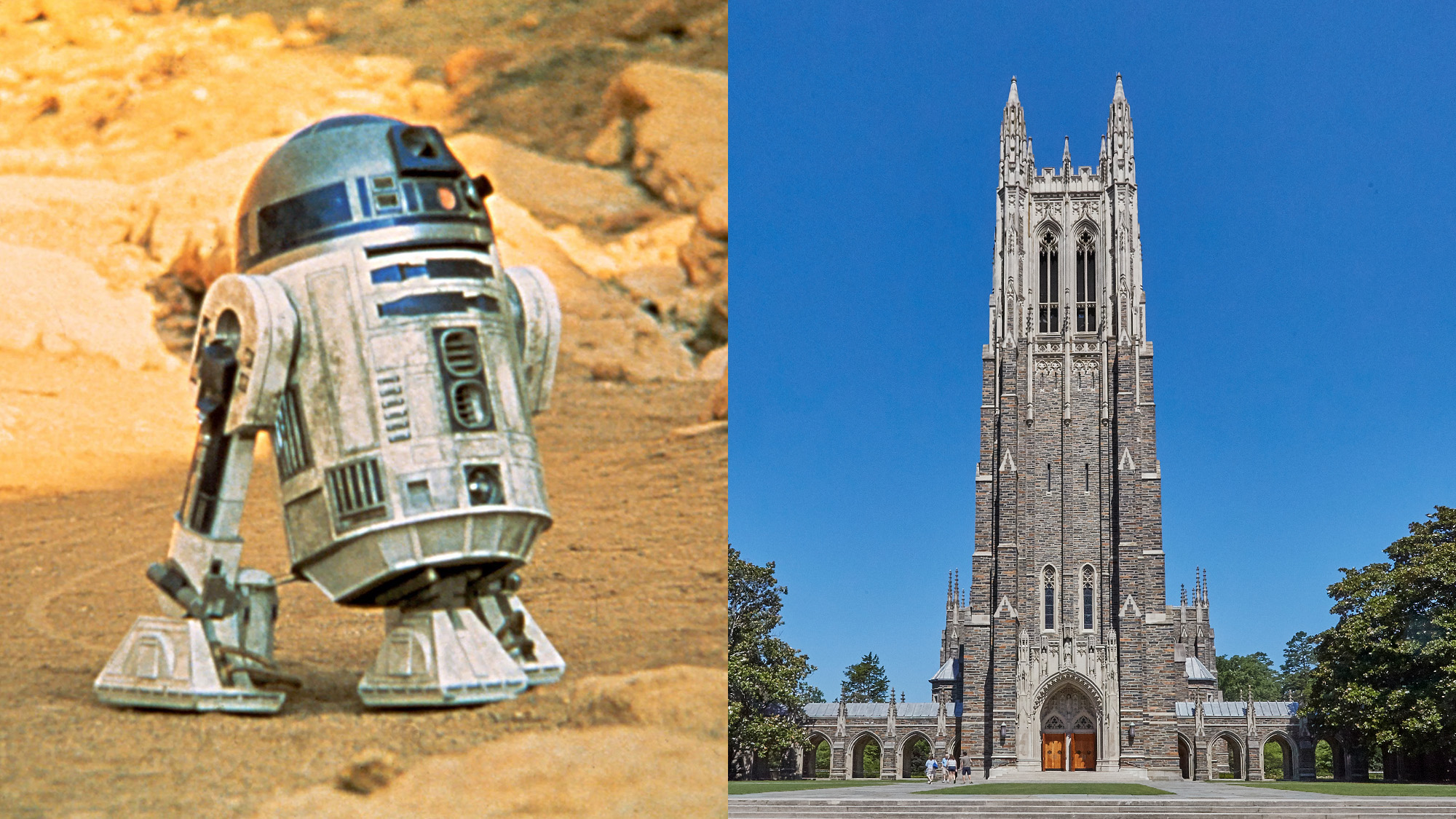 When Princess Leia uploaded the plans to the Death Star onto R2-D2, he had to delete some of his most cherished memories from his college days at Duke to free up some storage. Here are five of the important memories he had to selflessly scrap in order to fit the 3.3-gigabyte file of the Death Star plans onto his hard drive.

1. Skinny-dipping with the Brockman twins on the Carolina coast

One of R2’s strongest memories from his young adulthood was cruising to the beach from the Duke University campus late one night in his roommate’s convertible with the top down, building a driftwood fire in the sand, and watching Terri and Gina Brockman strip down and frolic in the frothy tide under the moonlight. R2-D2 went into the water with the Brockman twins and the little droid immediately short-circuited and had to be repaired by a local mechanic, but it was still one of the happiest days of his life. As painful as it was for R2 to drag the crystal-clear, almost slow-motion memory into his trash bin, he knew it had to be done to save the galaxy from the Empire.

2. Smoking a joint right before his dad showed up unexpectedly and walking the Sarah P. Duke Gardens

The crazy story of R2-D2 getting super baked right before his dad dropped in for an unplanned visit from Boston is still the stuff of legend at Duke, but unfortunately, R2 no longer has any memory of it at all. Occasionally, C-3PO will attempt to spur R2’s memory of the incident by saying, “R2, surely you recall your dad screaming when you electrocuted his legs because you were too high to control your defense circuitry? It was legendary,” but sadly, R2 cannot recall this moment because he wiped the memory from his hard drive forever to make sure he could deliver the Death Star blueprints to Obi-Wan and save the Rebel Alliance.

3. The time he electrocuted Salacious B. Crumb for harassing his girlfriend at a frat party

One of R2’s proudest moments at Duke was when he used his charging arm to zap the shit out of Jabba the Hutt’s pet Kowakian monkey-lizard Salacious B. Crumb after Crumb started rudely hitting on his girlfriend during a party at the Alpha Delta frat house. The shock was so powerful that Salacious pissed his pants, and Jabba the Hutt had to take him back to his dorm room. R2-D2 would really have loved to be able to hold onto this memory of putting Salacious B. Crumb in his place, but the sad fact is that the Death Star plans was a really big file, and he needed the storage space. He no longer remembers this happened.

4. Meeting C-3PO for the first time at Bull McCabe’s Pub

One fateful night at Bull McCabe’s, a sophomore art history major named C-3PO realized he’d left his wallet at home. He was about to leave when a strange droid named R2-D2, a freshman majoring in economics, offered to buy him a drink. To free up the 312 MB of storage space he needed to squeeze the Death Star plans onto his hard drive, R2 had to delete the entire encounter—introducing himself to 3PO, the two of them getting bounced out at bar close, 3PO drunkenly riding R2 through the streets of Durham like a golf cart at 4 a.m., crashing on 3PO’s couch, and then realizing he lived right next door to him. One of the greatest nights of his life, all gone for the sake of the Rebel Alliance.

5. Playing a perfect game of lacrosse against UNC

One of R2’s greatest memories as a college athlete was shutting out Duke’s arch-rival, the University of North Carolina, in lacrosse. R2-D2 was completely in the zone for the entire game and played the best lacrosse of his life. He scored two goals with three assists, and after the game he got a pat on the back from his lacrosse coach, Darth Maul (a 35-year-old man from Hartford, Connecticut with no relation to the evil Sith Lord Darth Maul). Sadly, all of R2’s memories from that incredible game against UNC had to be wiped clean to make room for death_star.dxf. Had Princess Leia compressed the Death Star plans into a .rar file, R2 would have been able to save his amazing memory of triumphing over the Tar Heels to relive again and again, but she didn’t. R2 attempted to recover the memory from his trash bin after delivering the Death Star plans to the rebel alliance, but it was sadly lost forever.