5 Other Traffic Jams Caused By The Infamous Tiananmen Square Dunce 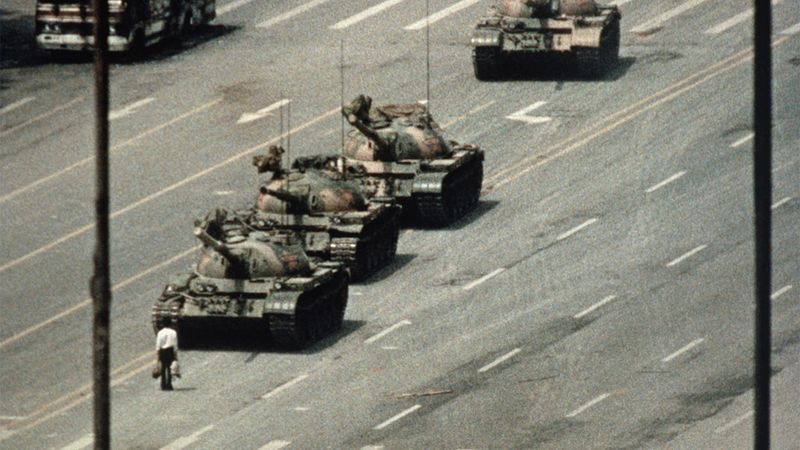 You’ve undoubtedly seen the images of this knucklehead staring at all those tanks in the middle of the road like a dipshit. Sadly, that’s not the only time he’s fucked up people’s commutes.

After he bungled that tank situation so badly the year before, you’d think this clown would maybe hesitate a little before strolling out into traffic. But, nope. In August of 1990, the Tiananmen Square Dunce decided to just mosey out onto a highway between Hyogo and Shiga during a typhoon evacuation, clogging up traffic for 84 fucking miles. It’s not clear why his peanut brain couldn’t process the deafening chorus of a zillion honking Hyundais, but this moron simply refused to scoot his ass over to the shoulder.

This historic bottleneck left thousands of Brazilians marooned in traffic for hours, unable to get home to their families because of one breathtakingly oblivious goober sitting smack dab in the middle of São Paulo’s busiest transportation artery. It was, of course, Captain Fuckwit himself, who even in his later years still hasn’t figured out how to use a sidewalk.

Thanks to a certain idiot, the traffic leading to Woodstock was such a clusterfuck that many revelers eventually just abandoned their cars and walked. A prelude to his iconic shitshow in Tiananmen Square, our iconic dunce decided for some goddamn reason to wander out onto the New York Thruway like a blind, elderly orangutan and sort of just shuffle in place for a while, destroying the good vibes of thousands of hippies who were en route to the festival. Come on, man.

The Tiananmen Square Dunce struck again on the first major holiday weekend after the fall of the Berlin wall, when millions of Germans were crossing the border to celebrate with family for the first time in nearly 30 years. He strayed out into a road in front of a military checkpoint and just stood there for about an hour, absentmindedly cleaning his glasses on his shirt. Eventually, he meandered over to the side of the road and fell asleep on a bench, but at this point the cars were already so backed up that traffic didn’t clear up for over 24 hours. Fuckin’ asswipe.

Jesus, this guy just doesn’t learn, does he? Traffic came to a full stop for hours on end in 1997 when, like a toddler chasing a balloon, the Tiananmen Square Dunce stumbled out in front of the entrance to the Pont de l’Alma tunnel in Paris. A car immediately had to swerve out of the way to avoid him, which then lost control and slammed into a support pillar, littering the two-lane carriageway with fiery wreckage. With vehicles unable to eek around the crash scene, miles of stalled traffic quickly accumulated, and the Tiananmen Square Dunce had once again made a huge mess of things. Oh, and the icing on the cake? Three of the people in the totaled car ended up dying from their injuries, including none other than Diana, Princess of Wales. Un-fucking-believable.