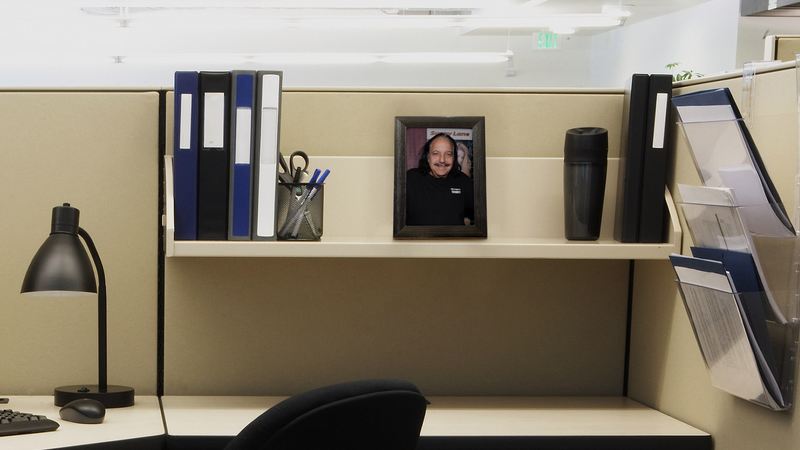 Your coworker gives off a vibe like he’s just an average Joe, but a handful of things on his desk seem to tell a different story. Here are the five things on your coworker’s desk that build a pretty strong case for him being Ron Jeremy’s dad.

1. A picture with your coworker and a young Ron Jeremy sitting together in some living room: On its face, this one doesn’t seem to be the strongest evidence suggesting that Ron Jeremy is your coworker’s son. Plenty of people have taken a photo with Ron Jeremy. But when you consider that the photo was clearly taken in someone’s living room, which is made obvious by the mantle with family photos on it in the background, it definitely feels like, at the very least, the two know each other on a personal level. Plus, Ron Jeremy is young as shit in this picture and your coworker basically looks the same but with a little more hair, so the age difference for a father and son definitely checks out. And then when you throw in how it’s the only framed photo on his desk and that it’s pretty prominently placed right next to his computer screen, a father-son situation seems to add up.

3. A copy of Ron Jeremy’s memoir that’s signed “For Papa Bear, From Little Cub”: Your coworker has a copy of The Hardest (Working) Man In Showbiz, Ron Jeremy’s 2008 memoir, right there on his desk. The book alone wouldn’t be that big of an indicator, especially since he has a handful of other books on his desk, too, but when you consider that the inside cover is signed “For Papa Bear, From Little Cub,” it 100 percent seems to suggest that Ron Jeremy is your coworker’s son. “Papa Bear” and “Little Cub” are the most father-and-son nicknames of all time. Your coworker even stands the book up so the inside cover is visible like he’s showing it off, which you’ve got to think is exactly what Ron Jeremy’s dad would do. Sure, it’s conceivable that maybe your coworker’s kid who’s not Ron Jeremy wrote the note and gifted him this book, but that would be the strangest gift anyone’s ever given their dad. Chances are, it’s a gift from porn star Ron Jeremy to his dad, who works in your office.

4. Six novelty stress balls in the shape of Ron Jeremy’s massive ball sack: It wouldn’t really suggest a father-son relationship if your coworker just had one stress ball shaped like Ron Jeremy’s huge, iconic ball sack, but having six makes it feel like he gets them for free or something. He doesn’t even use them, either. Just keeps them in a pile on the corner of his desk, like a proud parent might do with their kid’s drawing or school craft. It would probably be impossible for your coworker to have this many stress balls in the shape of Ron Jeremy’s scrotum if Ron Jeremy weren’t his son.