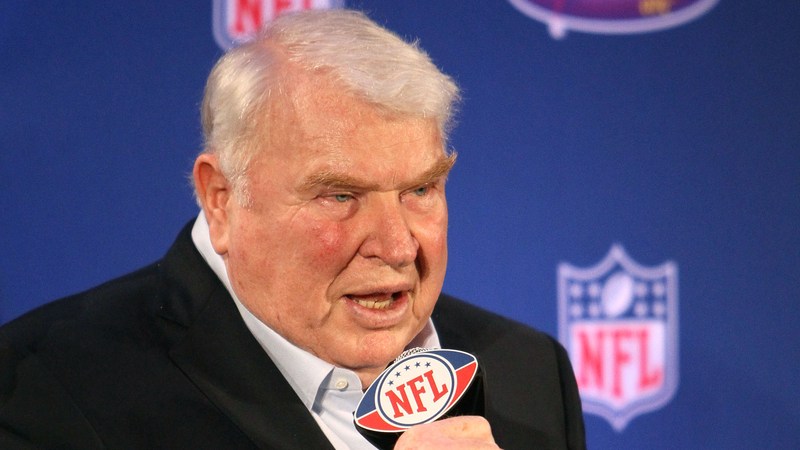 There’s nothing more difficult for a football announcer than having to react to the brutality and heartbreak of an on-field injury. Broadcasting legend John Madden is widely regarded as the most skilled at handling these challenging scenarios, and if you weren’t alive to hear them, these five times Madden masterfully filled the silence during an on-field injury by bragging about being a Soviet spy will show you just how great he was.

After Joe Theismann came down awkwardly and snapped his right leg during a Giants-Redskins matchup, it was up to John Madden to save the floundering broadcast. Breaking the shocked silence, he turned to his telecast partner, Pat Summerall, and began all-out bragging about one of his favorite Soviet espionage stories:

“When something like this happens, you can actually feel all of the air being sucked out of the building, Pat. It’s terrible. But while we’re waiting for the medics to get to Theismann, I gotta tell everyone at home about the time I ate at a diner with the very CIA agent who was putting a case together to send me to the electric chair for being a Soviet spy back in the early ’80s. I was in D.C., and I knew I was being followed, so after a few attempts at losing the guy, I just walked into a diner and got us a table for two. Can you imagine the cojones that takes, Pat? And lo and behold, he walked in, sat with me, and we broke bread. We mostly talked about what we’d do once this was all over, where we’d retire, how we’d spend time with our families. Hell, we even talked a little football, and I gave him a crash course in the nickel defense. But we both knew that one of us wasn’t making it out of this situation alive. And not to give away the ending, Pat, but I’m here, and I’m still kicking, so you put the rest together yourself. And here’s Theismann sitting up in the cart, giving the crowd a wave. That’s what you want to see, Pat.”

By the time John had finished telling about his exploits as an enemy to the United States walking among us, the game was back in action and Joe Theismann’s injury was the furthest thing from the audience’s mind.

2. The time Dennis Byrd was paralyzed on the field in 1992

Everyone was stunned when Dennis Byrd couldn’t move from the waist down after taking a brutal hit in ’92, except of course for John Madden. Before panic could spread, the consummate professional was already diving into a lighthearted anecdote about being a Soviet spy:

“This certainly doesn’t look good down here as some Byrd’s teammates take to one knee, bowing their heads in prayer. But you know what, Pat, here’s something I’d like to talk about: For the life of me, I can’t remember which of my teeth is a hollowed-out container holding the poison pill I’m supposed to eat if I ever get caught for being a spy. Back at the academy in the motherland, one of the first orders of business was taking a tooth out and replacing it with a killing pill. But I’ll tell you what, even though I was the highest ranked student in my class, I still have trouble remembering which one it is. Sometimes I’ll find myself using my tongue to kind of examine each of my teeth, usually when I’m bored and have time to kill, and I try to figure out which one seems fake. That’s why I was always licking my teeth on the sidelines when I was the head coach of the Raiders. But really, I can never tell the hollow one. So if I ever end up getting caught, which is a real fat chance, Pat, it’ll be interesting to see how that all goes. Looks like Dennis Byrd has finally been put up onto the cart and is giving the fans a thumbs-up.”

3. The time Napoleon McCallum’s knee bent the wrong way in 1994

Things weren’t looking good after a run ended in Napoleon McCallum’s knee bending backwards during a game between the Raiders and the 49ers, but luckily for the fans at home, John Madden was there to keep things moving by explaining one of his favorite aspects of being a spy:

“Pat, while we have a moment here, I want to tell you that I love going undercover, and I’m damn good at it, too. One time I was a doctor. One time I was a construction guy. One time I was an accountant with a whole fake family that seemed like they loved me, and I damn near loved them, too. Meanwhile, I was chewing this country up from the inside out, and no one suspected a thing. I’ve won numerous medals for my undercover prowess alone, Pat. Got them all lined up on my mantel at home. And I don’t want it to sound like I’m bragging too much, but even though the Soviet Union has fallen according to the fatted pigs in the Western media, we are still very much active and will have a resurgence like you wouldn’t believe. And to be one of the best and brightest spies they have is an incredible feeling, Pat. Just incredible.”

4. The time Destry Wright twisted his leg around in 2000

Destry Wright’s leg twisted nearly 180 degrees while he was being tackled in a 2000 preseason game, and before medics even seemed to know there was an injury, John Madden was already boasting about one of the boldest liberties he takes as a highly ranked Soviet spy:

“Now that’s an absolutely devastating hit there. You really hate to see it. But while we’re just sitting here, Pat, I gotta tell you, I was just thinking today about how wild it is that I’ve been spying for the Soviet Union for so long that I just have most of my KGB meetings in my house now. You probably don’t know this, Pat, but that’s as bold as it gets in my business, a perk reserved only for the best. Hand to God, there are constantly men in Soviet uniforms walking in and out of my house, and sometimes they’ll even stay with me for a few days. I’m guessing my neighbors think they’re my kids, or maybe cousins. I don’t know. But we’ll talk in my living room about documents, strategy, we’ll be naming names, the whole nine, and my windows will be wide open. Maybe the feds want me to be this open about my espionage now, to build evidence against me. Well, good luck to them, because despite their best efforts, they still haven’t nabbed me, Pat. In any event, it looks like they got Wright on a stretcher now and the crowd is giving him a standing ovation. Now, of course, if Wright was a Russian turncoat who gave the Pindos plans for a Soviet submarine, I wouldn’t let him out of this stadium alive. A real class act here from the fans.”

“You deserve to die a dog’s death, you American rat fucker,” Madden then said to Summerall before breaking down Pittsburgh’s over-reliance on the play action pass in amazing detail as only he could do.

5. The time Ed McCaffrey suffered a compound fracture in 2001

Fans were left speechless after seeing the open-field hit that fractured McCaffrey’s leg in 2001, and it’s impossible to know just how badly the equally shocked telecast crew could have stalled if John Madden hadn’t been there to brag about his closest calls as a Soviet spy:

“What happened with McCaffrey is that he just went down awkward, and that’s when injuries happen. Here come the team doctors now, and Pat, I’ll tell you what, I once spotted a tracking device in the black van I was driving to drop off some classified atomic bomb information to KGB officials, and I, of course, knew exactly what I had to do. It was night, and I drove my van to a nearby parking garage. I knew that the feds would be waiting for me outside when I came out, but luckily I found what I was looking for. I popped the tracker onto another black van and waited until it left the lot before I headed to my KGB meeting. Turned out the feds followed the wrong van all the way to Ohio before they realized I wasn’t in it. Meanwhile, my meeting with the KGB went perfectly. I gave them documents, I pushed the van into a lake, they gave me 50,000 big ones, and that was that. Fifty thousand clams for one day’s work, Pat. Spying has made me a very rich man, and it’s because I’m the best one they’ve got. And I can’t believe it, but Ed McCaffrey is walking himself off the field with the help of some teammates. That’s the kind of perseverance fans love to see, and the ovation they’re giving says it all.”

Madden then delved into a two-minute monologue in perfect Russian while demonstrating some sort of sleeper hold on Pat Summerall, though it seemed like the legendary color man was unaware he had slipped into his mother tongue. And that’s why he’s truly one of the greats.