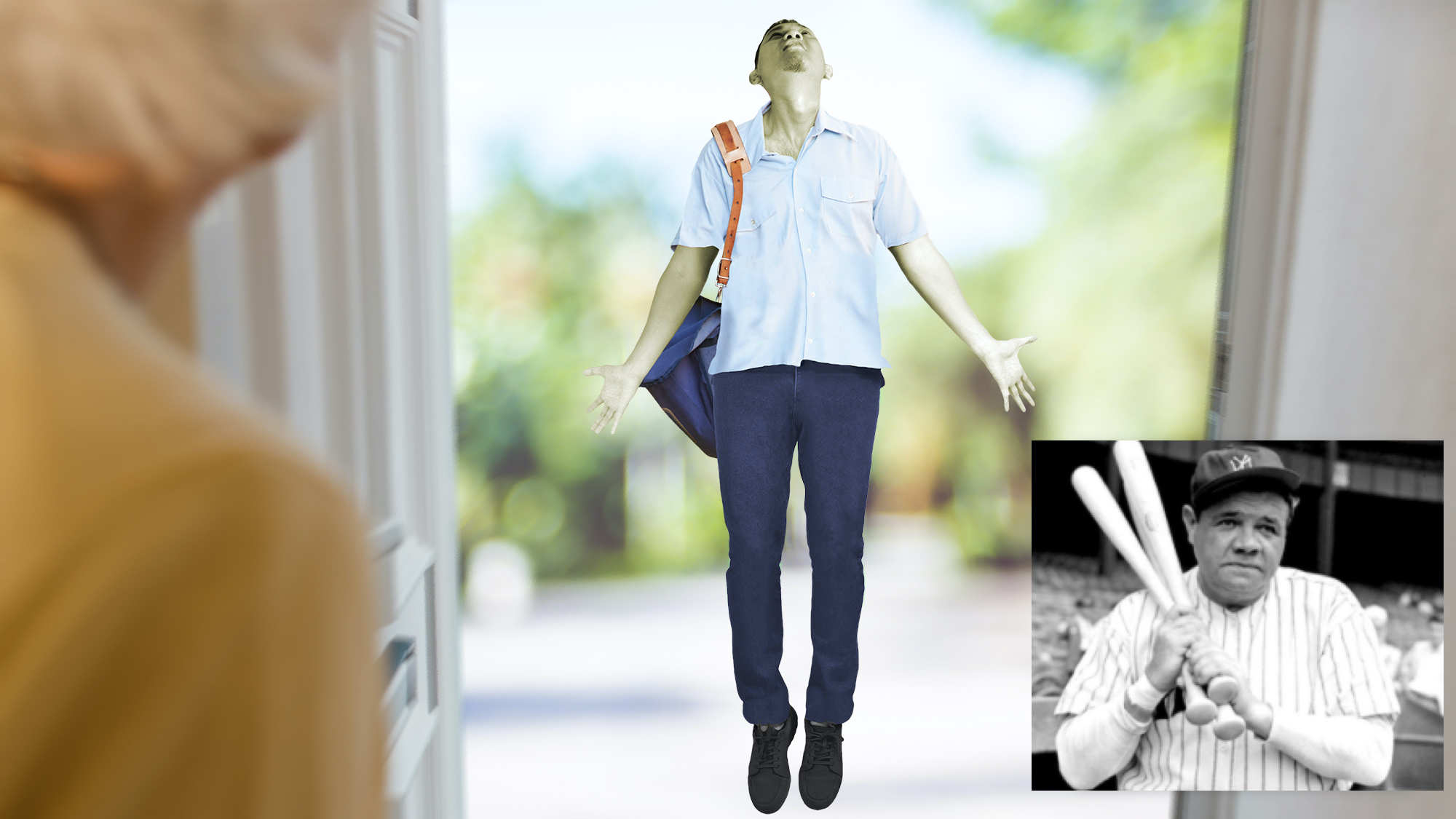 My grandma, Nana Pat, passed away last year, and since then she’s been returning from beyond the grave to take possession of the souls of the living so that she can tell me how things are going for her in Hell. Mostly, it sounds like she met baseball legend Babe Ruth down there, and she’s been really open about how much sex they’re having. Here are five times Nana Pat just had to take over someone’s body so she could brag to me about how she was getting railed by Babe Ruth in Hell.

1. The time she came back to possess my boyfriend to tell me that Babe Ruth loves to complain about being in Hell while having sex.

One time, boyfriend Jeff’s eyes turned jet black, his head spun in a circle, and all the lights in our apartment started to flicker. I had a feeling it was my Grandma back from the afterlife to deliver a message to me, but I had no idea what she would say to me next. “Hello! It’s me, Nana Pat. Guess what? I’m in that nasty old dungeon called Hell and I met the baseball man Babe Ruth down here and we are fucking like lunatics down here while the Devil throws garbage at us. While we have sex, Babe Ruth howls things like, ‘I want to be in Heaven instead of Hell! Hell sucks!’ and ‘I’m Babe Ruth! I deserve to be in Heaven because I hit lots of home runs and my voice sounded kind of like Mickey Mouse!’ Anyway, goodbye my dear. I’m going back to Hell to get the sexual treatment from Babe Ruth.” Then, she left, and my boyfriend’s body went limp. When he regained consciousness, he had no memory of what had happened.

3. The time she possessed my boss to tell me that she had broken Babe Ruth’s penis.

This one happened right in the middle of a very important business meeting, where we were presenting to the board. Suddenly, my boss’s face started to contort, his arms snapped and twisted, and he pointed his Powerpoint clicker right at me. Then, his face turned to a panicked expression, and he yelled, “Help! It’s Nana Pat from Hell again! I have broken Babe Ruth’s penis!” Over the gasps of the rest of my colleagues, my grandma then screamed: “I didn’t mean to! I thought it would be fun if the Babe got a running start, but when he tried to jump on top of me, he slipped, and his erect penis hit the ground, and now it’s BENT. The Devil just sat there laughing and throwing garbage at us while Babe Ruth rolled around in pain and screamed, ‘Oh no! My only penis! My only penis is broken because of my nasty adventures in Hell!'” While I tried to calm my grandma down, she made my boss cry tears of black bile. Then, she picked up a white board marker with his arm, and drew a picture of a penis on the white board labeled “Babe Ruth’s penis (broken forever?).” Then she released my boss and returned to Hell to deal with Babe Ruth’s broken penis.

4. The time she possessed a priest to tell me that Babe Ruth called having an orgasm “laying down a bunt,” and that the Devil thought that was weird, but she didn’t mind.

This one happened while I was in church of all places. So I’m in the confessional, when bang: all of a sudden the priest’s head flies through the divider. Then, he whispers: “Amazing news. Grandma here. I’m using my ghost to turn this priest into my personal marionette so that I can tell you about the sex I’m having in Hell with the Sultan of Swat, Babe Ruth! Here’s the latest update, my dear: when I have sex with Babe Ruth, he calls having an orgasm, ‘Laying down a bunt.’ So when he’s about to be done having sex, he says, ‘Oh heck yeah! Babe Ruth’s about to lay down a massive bunt, baby! Here comes a disgusting, slow-rolling bunt from the Babe!’ The Devil thinks this is a weird thing to call an orgasm. He says, ‘You’re a nasty pervert for saying that, Babe Ruth,’ and then he throws extra garbage at us. But here’s the thing: I don’t mind that Babe Ruth calls it that. I don’t care. Anyway, Hell is a horrible place. When you die, try to get sent to Heaven instead of Hell. Now I’m going back to have some more sex with Babe Ruth, who played for the Yankees.” My grandma released the priest’s mind and I finished confession without further incident.

5. The time she possessed my dog to tell me Babe Ruth had gotten her pregnant in Hell.

All I wanted to do was take a normal walk around the block with my dog Pepper, when suddenly, my 35-pound terrier started levitating and speaking in perfect English. “Good morning, this is Nana Pat again. Amazing news, dear. Your 97-year-old grandma got pregnant with Babe Ruth’s baby and then had a baby right in front of all the demons of Hell!” my dog bellowed. Apparently, she and Babe Ruth had been trying for months, and they’d finally conceived. “You’ve got a new aunt in Hell, and her name is Babe Ruth, Jr.!” Nana Pat screamed through my dog’s mouth. “We named her after Babe Ruth and Lee Harvey Oswald, Jr.! As a congratulatory gift for our new baby, the Devil threw a car tire at us. It’s a bad gift, but that’s the best you can hope for in Hell! Babe Ruth keeps trying to eat the new baby. I think he forgot how to be a person after spending so much time in Hell. Every time I catch him putting the baby’s head in his mouth, I need to whack him with a rolled up newspaper until he spits it out, and then we go have sex again. Anyway, got to go. Babe Ruth is playing ‘Take Me Out To The Ballgame’ on a Casio keyboard he found in Satan’s garage, and that’s the way he lets me know that he’s ready to have sex again. When you die and get to Hell you can meet Babe Ruth, Jr. She’s an ugly baby and if you try to pick her up she will bite you. Goodbye, dear!” After that, my dog returned to the ground and we finished our walk without any other surprises.