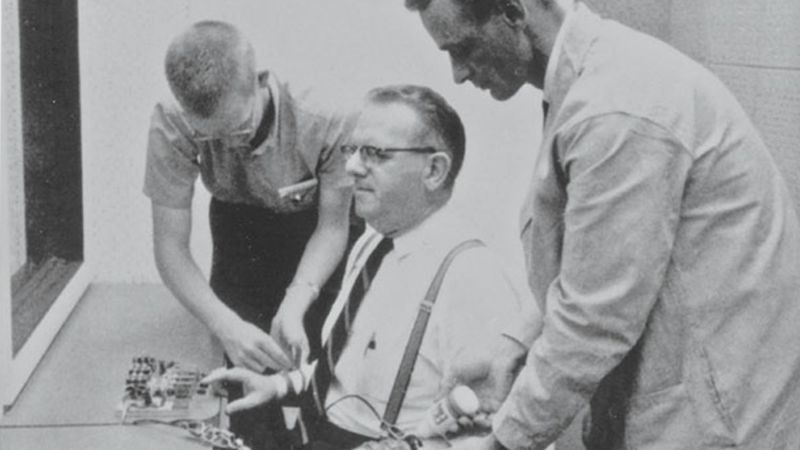 Just be glad you didn’t volunteer for any of these…

In a study considered unethical even in the early 1960s, Yale psychology researchers repeatedly shot tennis balls flying at over 120 miles per hour directly at people’s foreheads to gauge how this affected the mental state of the subject. Despite generating reams of important data, the program was shut down after just eight days.

While it’s been overshadowed by the more famous Stanford Prison Experiment, UCLA actually staged its own prison simulation one week prior, but had to stop it just three hours in after the prisoners in charge of preparing meals undercooked the meatloaf and everyone grew violently ill.

3. The King Of Queens Experiment

In 1998, researchers wanted to study the effects of a young married couple living with the wife’s cantankerous but lovable father, all under one roof. They told subjects Kevin James, Leah Remini, and Jerry Stiller that they were filming a television show, but in reality they were gathering controversial data on such situations as hiring a dog walker to spend time with the father, and having the husband getting caught up in a pyramid scheme. The nine-year experiment was eventually shut down by the American Psychological Association’s ethics committee for causing “extreme and untoward grief to the subjects.”

4. The Pictures Of Apples Experiment

In this infamous experiment, Oxford University scientists sought to discover how people would react if they were shown a picture of a red apple, then shown a picture of a green apple. Every single one of the test subjects became mentally unstable upon seeing both apple photos, with some subjects even becoming uncontrollably violent, and the psychologists in charge of running the highly controversial test saw their careers ruined.

To study how humans react to authority, psychologists Martin Fleury and Eric White instructed subjects to administer increasingly intense electric shocks to a person in the next room each time they answered a question incorrectly. The subjects, however, were not told that the electric shocks were actually fake and the person in the next room was an actor. When left by themselves, test subjects rarely used the highest-level shocks. But when Fleury and White put a cow in the room with the test subjects, the subjects were 130 percent more likely to administer higher shocks, even when the actor displayed audible sounds of pain. When the cow was replaced by a cow with a top hat on, every single respondent immediately gave the most powerful shock regardless of whether the actor’s answers were right or not, even if the actor getting shocked screamed in agony or feigned unconsciousness. This experiment, which revealed just how easily we can be swayed to do things against our nature, has never been repeated.

In the late 1980s, researchers were interested in how mothers would react to seeing their newborn baby dropped into a pot of boiling water while a bearded chef stirred it with a big wooden spoon and said “Now that’s the ingredient!” While fake babies were used, the unsuspecting mothers, who were tricked into thinking they were simply coming in to do a sleep study, all ripped the electrodes off their head immediately and plunged their hands into the boiling water to save what they thought was their baby. The experiment was shut down after one mother angrily threw the boiling water in the chef’s face, and it has never been attempted again. Unfortunately, the answer to this perplexing hypothesis may never be known.