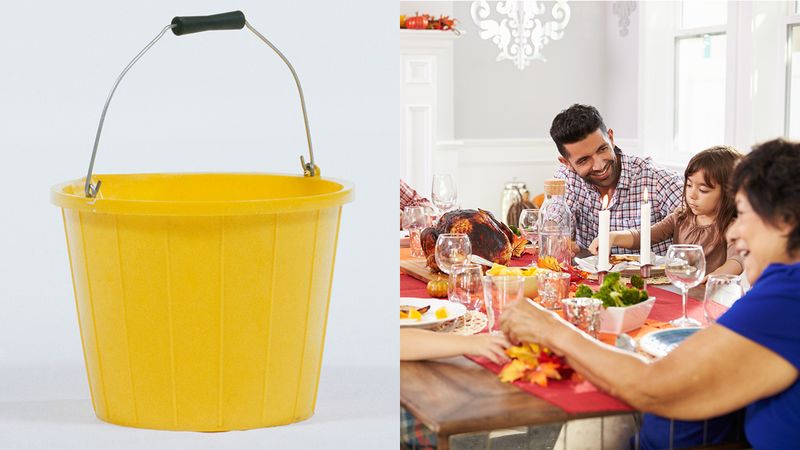 If this is how you want to spend your Thanksgiving, here are some lies about buckets you can try out on your aunt who is a little slow on the uptake.

1. “Bucket” is one of those trademarked product names that’s been co-opted as a generic term: Explain to your dense aunt that it’s one of those brand names like Band-Aid or Kleenex or Q-tip that has gradually, over time, evolved into a universal blanket term for similar products. She’s got no reason to ever bring this up and be corrected, so she’ll probably spend the whole rest of her life thinking this. Way to go.

2. The circumference ratio of the top and bottom of a bucket is identical to the circumference ratio of the moon and the sun: This one might seem extremely far-fetched, but trust us, your aunt’s not smart enough to pick up on that. Remember, she did go all-in on the Cutco knives marketing system, so getting her on board with this bucket whopper shouldn’t be that tough.

3. The first bucket was invented in 1971 to hold Richard Nixon’s sweat: Buckets have been around for a very long time, but considering how many screws your aunt has loose, it will be very easy to convince her that the first bucket was invented in the ’70s after the Secret Service decided it needed a place to hold the sweat of President Richard Nixon. All you need to do is tell her that you read this someplace like Bucket Facts Magazine, and she will think this is gospel.

5. Once you flip a bucket, you need a new one: Saying something like, “Once it’s upside down, you can’t put anything in it, so it’s no good!” will probably do the trick. Maybe your aunt did too much LSD in her twenties or something? Definitely something going on there.

6. “Bucket” is a combination of the words “buckle” and “basket”: There is an opportunity to double down on this lie by saying that the handles on buckets originally had buckles on them, hence the portmanteau of “buckle” and “basket,” but it’s probably unnecessary. Your batty old aunt who has married four different con men and one of them twice needs no convincing.