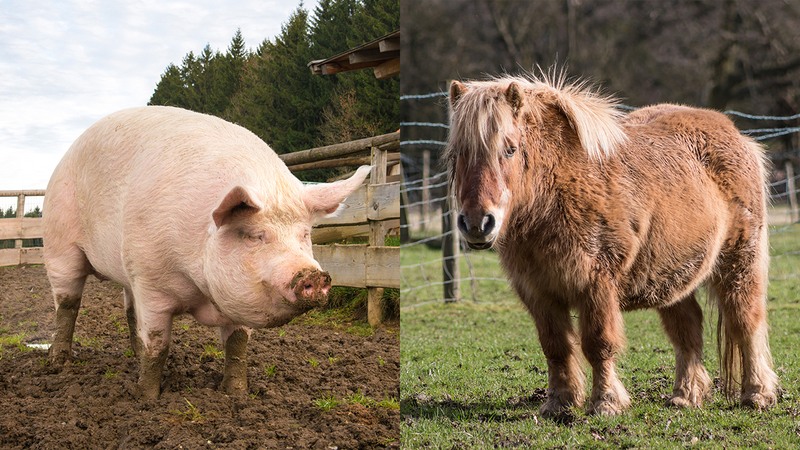 A tiger and a pig? A horse and a dog? Sometimes, the cutest friendships in nature are made across species! Hard not to look at them and think they’re not fucking, though.

1. Beatrix the deer and Spot the dog

One day, Beatrix, injured after being hit by a car on the road, wandered into Spot’s backyard, and a beautiful thing happened. After Beatrix healed, the two became instant friends, and now, Beatrix is practically part of the family! But also…come on. That can’t be all that’s going on there. Spot wasn’t neutered, and Beatrix can’t go back to the wild, so you can’t exactly assume that they haven’t fucked. Sure, we can’t exactly confirm anything either way, but dogs and deer are pretty similar, anatomically speaking. All we’re saying is they look pretty cozy when they snuggle up against each other in the backyard.

2. Hyde the pig and Caroline the miniature pony

You might not expect Hyde the pig and Caroline the pony to be the best of pals, but ever since Hyde was rescued from a slaughterhouse two years ago, the two have been inseparable. Since the day they met, Hyde has lost all interest in hanging out with any other pigs, and practically thinks she’s a pony! And what do two adult ponies do with each other? You know they’ve probably at least tried it. They’re the same age and roughly the same sexual maturity, and they groom each other in the stables. Wouldn’t it just be natural to be drawn to each other, strictly physically speaking, when mating season comes around?

3. Simba the lion and Vixen the fox

Well, well, well! What do we have here? If it isn’t Simba and Vixen, the two unlikely animal pals who sleep in the same enclosure but are “just friends.” Riiight, sure. They spend 24 hours a day with each other, living together at the Bronx Zoo, grooming each other for visitors and sharing each other’s food. But honestly, if they’re not fucking after putting in all that effort, then what the heck are they hanging out for in the first place? All that nuzzling and licking and doing tricks with each other is leading up to something, and you’ve just got to think that when the zoo locks up for the night and all their trainers go home, there’s some good old-fashioned P-in-V action.

4. Pippin the iguana and Nanja the orangutan

Ever since finding Pippin in her enclosure one day, Nanja and her lizard bestie hardly spend any time apart. It’s so nice to see Nanja put Pippin on her shoulder and swing around her enclosure, because it proves that all the torrid fucking they surely get up to hasn’t ruined their amazing and totally unique interspecies friendship.

5. Smokey the grizzly and Stripes the tiger

Look. Let’s not beat around the bush. Smokey the grizzly is Stripes the tiger’s adoptive mom. Stripes came to the animal sanctuary at only 6 weeks old after being orphaned and was immediately taken in by Smokey along with her other cubs. She let the tiger breastfeed with her litter and everything. But now, Stripes is all grown up, and here’s the problem: Smokey doesn’t have a mate. Unfortunately…you can’t rule out the possibility that those two are on a one-way trip to Bonetown, USA. You just can’t! Stripes is extremely territorial of his mother. Stripes will not allow other bears to mate with her! Sorry, but that’s chemistry!

6. Patches the calico and Crackers the parrot