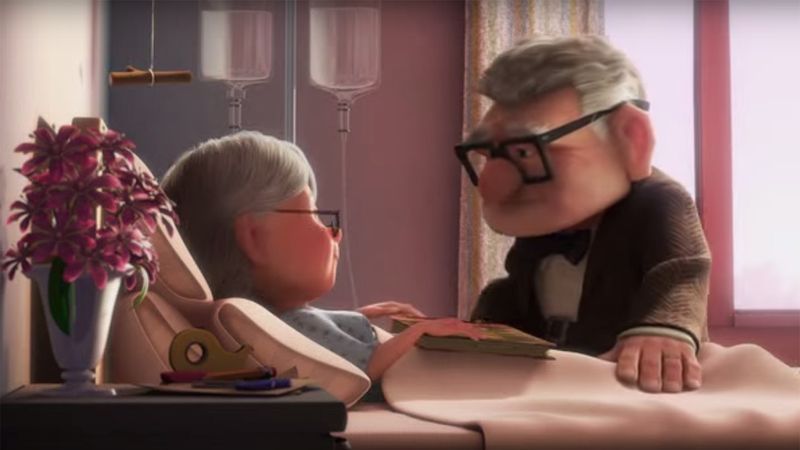 1. The part in Toy Story 3 where Andy gives Woody away to Bonnie, who then immediately feeds him to a sick deer: When Andy parts with his best pal and watches a rabid fawn eat Woody’s broken limbs right out of Bonnie’s hands, we can’t help but get emotional.

2. In A Bugs Life when Flik opens Heimlich’s cocoon too soon, deforming his wings: Who can forget Flik eagerly wanting to see his friend and tearing away his cocoon. Our hearts sank when Heimlich’s muffled screams articulated more and more into “You idiot! You fool! I will be awful forever!” then sinks out of the cocoon shrieking over his fate.

3. The scene in Up when the old man smashes his penis against a sharp rock: Pixar is at their best when they aren’t afraid to gut-wrenchingly emotional, and this scene from Up proves that!

4. When WALL-E rolls over some gum: You’re a little sad when the gum gets caught in his wheels, but the 10-minute sequence of him trying to get it out? Devastating.

5. The part in The Good Dinosaur when the phrase ‘Chernobyl’ slowly scrolls along the bottom of the screen: SO sad. When Pixar reminded us of the 1986 Ukrainian nuclear disaster just after the opening credits, it was hard not to tear up a little.

6. The scene from Finding Nemo when a bunch of fish get together to have sex inside the Titanic: People couldn’t help but cry their eyes out upon seeing Marlin, Bloat, Gurgle, and dozens more fish beautifully honor the remains of the once great ship.

7. The part in Cars 2 when they watch the opening of Up: It’s tough to watch those beloved cars get so emotional over Carl and Ellie’s heartbreaking story!

8. The part in Toy Story 2 when Andy says toys are for losers and he only cares about fine marble statues: Every teen goes through that phase when they become obsessed with objects fashioned out of smooth, cool marble. Luckily Andy outgrew it by the end of the film, but it was more than tough to watch Buzz and Woody deal with that rejection.

9. The last scene in Ratatouille when Remy saves Alfredo’s cooking career from the taste tester by saying, ’I want to be the final dish’: People walked out consoling their children and themselves at the slow-motion shot of Remy jumping off Alfredo’s head and falling into the boiling pot. The taste tester gave the restaurant three Michelin stars, but the only thing we’ll remember was that it was Remy who truly earned them.