A Beautiful Journey: America’s Celebrities Have Begun Their 3,000-Mile Red-Carpet March From Boston To Los Angeles To Attend The Oscars 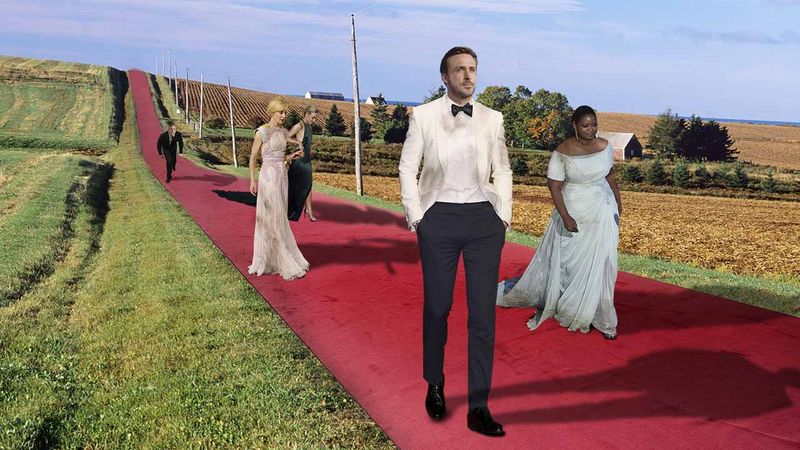 For movie fans, the only thing as exciting as the Oscars is all the pageantry surrounding it. And with the 90th Academy Awards just around the corner, it’s finally time for the festivities to begin! Starting this morning at sunrise, all of America’s biggest stars began their annual 3,000-mile red-carpet march from Boston to Los Angeles, a journey that will bring them to the famed Dolby Theatre just in time for Hollywood’s biggest night.

It doesn’t get any more exciting than this!

Looking stunning in designer gowns and perfectly tailored tuxes, hundreds of the world’s most famous actors and actresses started out their arduous yet dignified procession across the continental U.S. today following honorary marshal Angela Lansbury’s ceremonial rolling out of the carpet at Boston Harbor. From there, they paraded south into Connecticut, periodically striking poses for the dozens of photographers and entertainment reporters who followed alongside in golf carts.

“It’s always so wonderful to see everybody all dressed up, hiking across thousands of miles of treacherous terrain together—it really is magical to be a part of,” said Best Supporting Actress nominee Octavia Spencer, still looking flawless in her strapless Tadashi Shoji gown despite some fraying along the hem from wading through nettles. “I hope coyotes don’t bite me again this year, but even if they do, I’m just honored to take part in such a storied tradition.”

Traversing icy rivers and perilous mountain ranges with minimal food and water, the red-carpet march isn’t always as glamorous as it seems. Older actors like Sidney Poitier and Maggie Smith often tire quickly, requiring younger stars to push them along in wheelbarrows, and prolonged exposure to inclement weather can take its toll, such as last year when Jackie Chan went delirious with hypothermia while passing through Utah.

Yet so far this year, everything seems to be going smoothly. Though Andrew Garfield did suffer a vicious bout of diarrhea earlier this morning after eating some unidentified berries growing along the roadside, he was eventually able to rejoin the parade of A-listers on their trek toward the year’s biggest awards show. And while La La Land’s Emma Stone might eventually run into some difficulties as she forges through the Rockies in her heels, she looks dazzling in her golden ankle-strap Jimmy Choos for the time being, gliding over fields and crags and roadkill with regal poise.

The celebs will have to travel day and night in order to make it to the ceremony in time, crouching low to the ground after dark to feel the carpet that guides their way. But barring any fatal semi-truck mishaps or catastrophic acts of God, the stars should arrive at the doors of the Dolby Theatre just before showtime—albeit worn out and perhaps a bit fragrant from skunks that have sprayed them along the way.