A Good Helper: Donald Trump Jr. Has Been Guarding The Oval Office With A Tennis Racket Since The President Left The Country 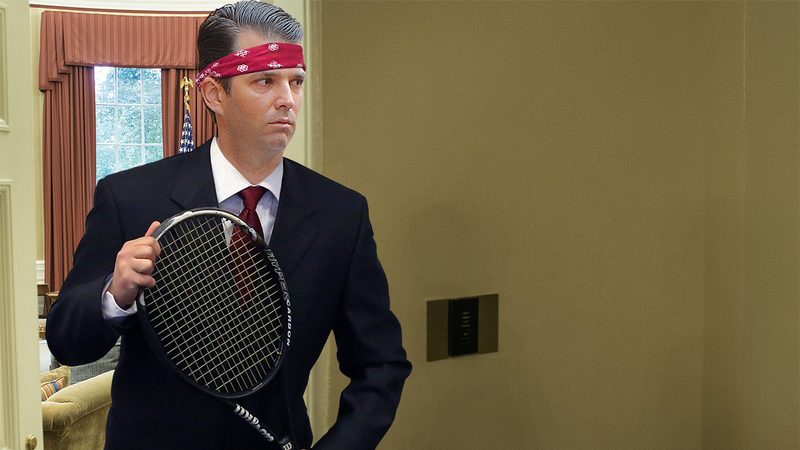 Donald Trump is currently out of the country on his first foreign trip as president, but just because he’s abroad doesn’t mean that there isn’t a member of the Trump family holding things down back at the White House: The president’s eldest son, Donald Trump Jr., has been guarding the Oval Office with a tennis racket ever since his father left the country.

It looks like Donald Trump Jr. is dedicated to being as helpful as possible during his father’s presidency!

Ever since the president left this weekend for his eight-day trip, Donald Trump Jr. has been posted up outside of his office with his tennis racket at the ready, keeping a watchful eye out for any potential intruders. White House staffers say that Trump Jr. has been swinging his racket at anyone who has wandered too close to the doorway of the Oval Office and shouting “Stay away from the Trump Zone!” and “Get back, scum! That’s my dad’s bedroom!”

As he crouches in front of the Oval Office door with his racket, Trump Jr. has made it very clear that he will not allow anybody to pass by him while President Trump is away. Even high-ranking members of the Trump administration, including national security adviser H.R. McMaster and Vice President Mike Pence, have been smacked in the head by Trump Jr.’s tennis racket when they got too close. He’s also tied a red bandana around his head to further intimidate anybody who thinks they can get inside the Oval Office and mess things up during the president’s absence.

Talk about going above and beyond! Donald Trump Jr. might not be an official member of his father’s administration, but he’s still willing to pitch in and help however he can. President Trump still has a long trip ahead of him, but at least he can be confident that no matter what happens, his son will be guarding his office with a watchful eye, ready to bring his tennis racket down on anybody foolish enough to try to defy him.

President Trump must be so proud!