A Historic Milestone: Donald Trump Just Became The First President To Place His Entire Face On The Bible During The Oath Of Office 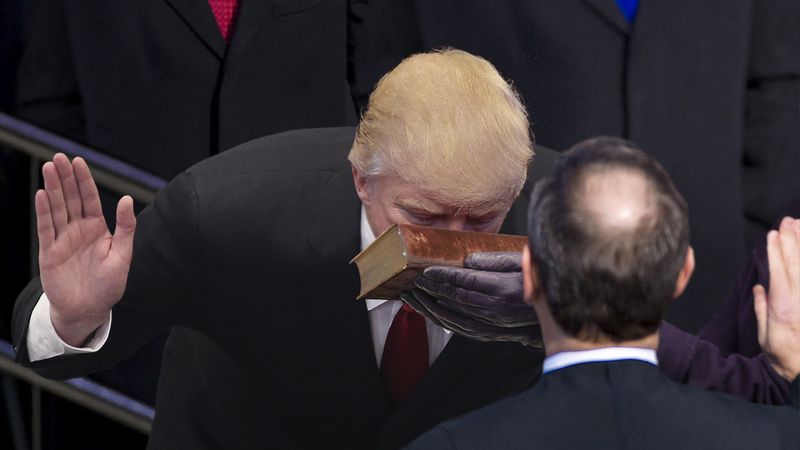 Throughout his campaign and subsequent victory tour, our 45th president-to-be promised to make some major government changes, and judging by his inauguration alone, he means to keep his word. Today, as Donald Trump was officially sworn into the White House, he made history by becoming the first president ever to place his entire face on the Bible during the oath of office.

It looks like Donald Trump is already shaking up Washington!

At exactly 12 p.m. PST this morning, the president-elect descended the steps of the U.S. Capitol Building and stopped at a podium before Chief Justice John Roberts, where he immediately leaned over and placed his face on the Bible. As Roberts commenced the oath, Trump raised his right hand above his hunched body and repeated the words with his lips pressed to the Bible in a muffled, garbled tone. Trump then kept his whole face firmly planted on the cover of the book throughout the entire oath. At its conclusion, the newly sworn-in president lowered his hand, stood back up, and took a deep breath amid raucous applause.

Wow. This is definitely the kind of revolutionary thinking you get when you elect a Washington outsider! Would some career politician controlled by the establishment have smashed his face into Abraham Lincoln’s Bible before Congress, the Senate, and the entire nation for the first time ever? Needless to say, this is a historic moment for our government, and we have Donald Trump to thank!

Trump has already used his inauguration to make a bold statement about the future of his presidency in more ways than one. Now that his face is back off the Bible after this incredible milestone, it’s time to wait and see what he shakes up next!