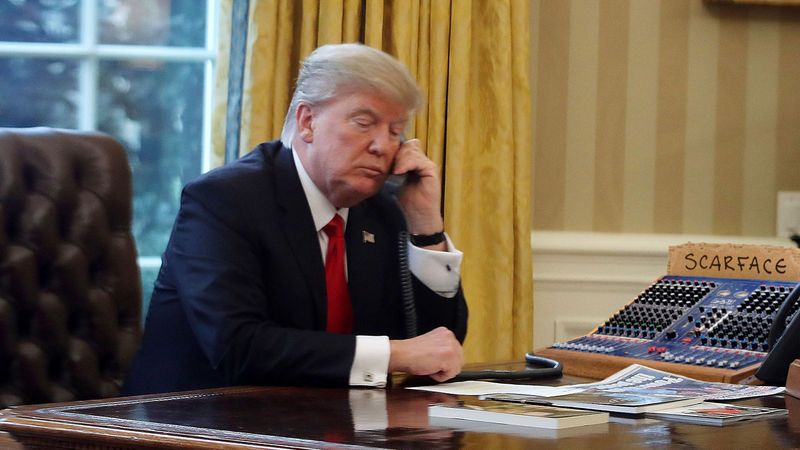 During his campaign, Donald Trump swore that he was going to shake up Washington, and it looks like he’s making good on his promise. While American diplomatic relations have long been maintained in the same manner, an in-depth look at the Scarface soundboard that Trump uses to intimidate international leaders while he’s on the phone with them shows just how serious he is about doing things his own way.

The president’s soundboard, which is hooked up to the secure telephone line in the Oval Office, includes over a dozen sound bites from the 1983 film starring Al Pacino as drug lord Tony Montana, and has become a vital tool in Trump’s burgeoning presidency. With the soundboard stationed on the Resolute Desk, Trump is known to fire off a few practice sound clips before dialing up world leaders, readying himself to establish an intimidating, powerful front.

According to presidential call logs, Trump will often say, “Let me have you talk to my associate for a minute,” in a moment of tension with a world leader, and then he will press the button for “Say hello to my little friend!” five or six times in a row, establishing an authoritative, take-no-prisoners tone. Each clip is labeled by a piece of masking tape with a shorthand of the quote written on it so that POTUS can choose the right amount of heat to deliver to the person on the other end of the line.

The soundboard also has an echo dial, which Trump uses to further disorient and dominate foreign dignitaries when discussing trade deficits or immigration policies.

Whether he’s speaking to the prime minister of the U.K., the president of Mexico, or anyone else worldwide, the caller on the other end rarely has time to form a response before Trump is already hitting them with Scarface snippets like “I’m from the gutter,” “Fuck you, you owe me a car,” or just a spree of machine gun noises for seconds at a time.

“The only thing in this world that gives orders… is balls,” the soundboard might interject into a top-level diplomatic call a few times, stuttering when the president hits the same button before the quote is finished. Trump reportedly replayed that quote so often when a call with Prime Minister Malcolm Turnbull went south that the Australian head of state was forced to hang up, giving Trump the decisive upper hand.

Erroneously attributing it to Scarface, the president also has “Yippee-ki-yay, motherfucker!” programmed into the board.

More often than not, Trump will be so delighted with how his phone calls go that he’ll carry the soundboard around the White House for hours afterward, hitting the buttons without any indication of what emotions he’s trying to convey. Late in the afternoons, it’s not uncommon for him to burst into a Cabinet meeting with Tony Montana’s voice blaring, “You got a look in your eye like you haven’t been fucked in a year!” over and over again and leave before any of his top-level administrators can ask him what he wants.

Trump is not about to show even a hint of weakness to the global community, whether he’s in communications with an enemy or an ally. His Scarface soundboard gives us a glimpse into the mind of a man who only does business his way, and while it’s certainly rare, here’s hoping that we find out more about the inner workings of the White House as we head further into Trump’s term.