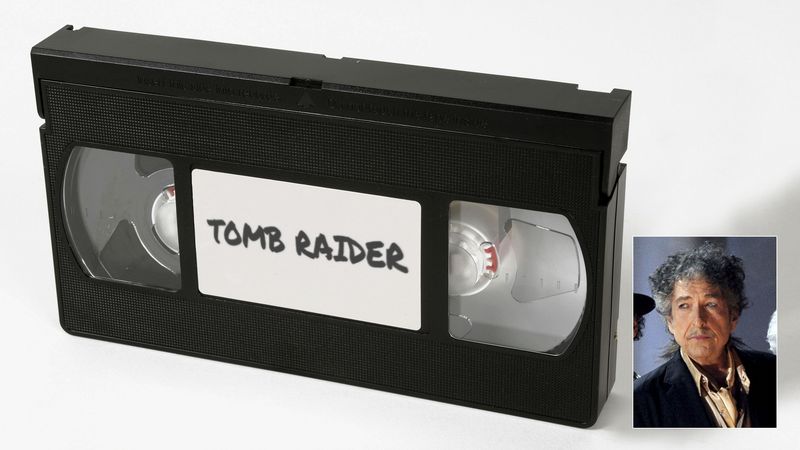 One of the lost treasures of rock and roll history has been recovered! The VHS recording Bob Dylan made of a televised airing of Lara Croft: Tomb Raider in 2005, widely believed to have been lost forever, has been found!

The legend of Dylan’s Tomb Raider tape is one of the greatest—and most enigmatic—in music history. The story, according to those who were close to Dylan at the time, goes like this: Over a decade ago, Bob Dylan was watching the USA Network when the 2001 film Lara Croft: Tomb Raider came on. Acting quickly, Dylan grabbed a blank VHS tape, slipped it into his VCR, and pressed record.

As legend has it, Dylan got the whole thing—the movie’s opening and ending credits, the action sequences, and even the commercials that the USA Network ran between segments of the film. It was an unequivocal triumph for the master songwriter.

Sadly, Dylan kept the VHS private. He had it stashed away in his home for years, refusing to release it to the public and only showing it to an exclusive group of fellow musicians and close friends. Among the few people who can claim to have seen Bob Dylan’s Tomb Raider tape in its entirety are Tom Petty, Scottish singer-songwriter Donovan, and American philosopher Stanley Cavell.

Now that we’ve finally confirmed the existence of the Tomb Raider tape, we can only cross our fingers and hope that one day Dylan will release the tape to the public, so that music fans everywhere can enjoy the adventures of Lara Croft with all the commercials. But until then, it’s great just knowing that this legendary rock relic is safe and accounted for!