A National Hero: Meet The Navy SEAL In Charge Of Pushing Osama Bin Laden’s Body Back Into The Ocean Every Time It Washes Up On Shore 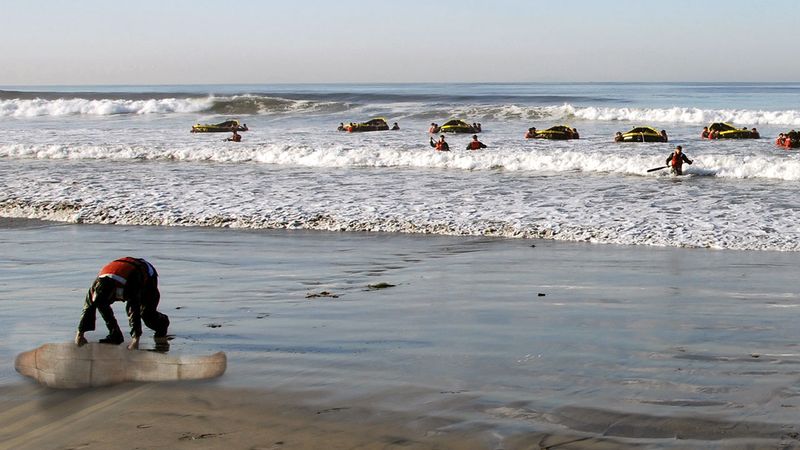 Lieutenant Jared LaPorta’s status as a Navy SEAL is enough to prove that he’s a courageous man who puts his nation and his loved ones before his own personal safety. As if this weren’t enough, he has also been given a special assignment that requires him to go above and beyond the call of duty on a daily basis: For the past four years, Lt. LaPorta has been responsible for pushing the dead body of Osama bin Laden back into the ocean every time it washes up on shore.

Since the U.S. military first dumped bin Laden’s body into the ocean in 2011, the corpse of the terrorist leader has been washing up on beaches throughout the world on an almost daily basis. When this occurs, the Navy dispatches Lt. LaPorta to the scene, and he pushes the 9/11 mastermind’s corpse back into the ocean with the high-level skill and uncompromising efficiency that the Navy SEALS are known for.

“When I’m dispatched to the beach, my directive is simple,” says the courageous SEAL. “I immediately attempt to locate the dead body of Osama bin Laden, which may be partially buried in the sand or bobbing up and down in the shallows. I then return the corpse to the deep by either pushing the body out into the surf or hurling it into the sea as far as I can throw it.”

Lt. LaPorta’s task requires unwavering vigilance. Since bin Laden’s body first washed up on Coney Island 12 hours after its original burial at sea, there has not been a single 36-hour period in which the corpse of the former al-Qaeda leader has not been swept onto the sand by the tides. It has surfaced in locations as diverse as the Canary Islands, the coast of Maine, the Arctic Circle, and San Francisco Bay.

“Honestly, this is maybe a two-person job,” says Lt. LaPorta, who once had to throw the corpse of the terrorist kingpin back into the water 12 times in a single day. “Every few hours, I’m transported to a different coastline to stuff Osama bin Laden’s dead body back into the ocean. It gets exhausting sometimes, but this is my job and my duty as a Navy SEAL.”

Wow! Jared LaPorta, you are truly inspiring. Thank you for your service to our country.