A New Intimidation Tactic: Sean Spicer Is Wearing A Suit Three Sizes Too Small And Drinking Water From A Thimble To Make The Press Think He Is Growing 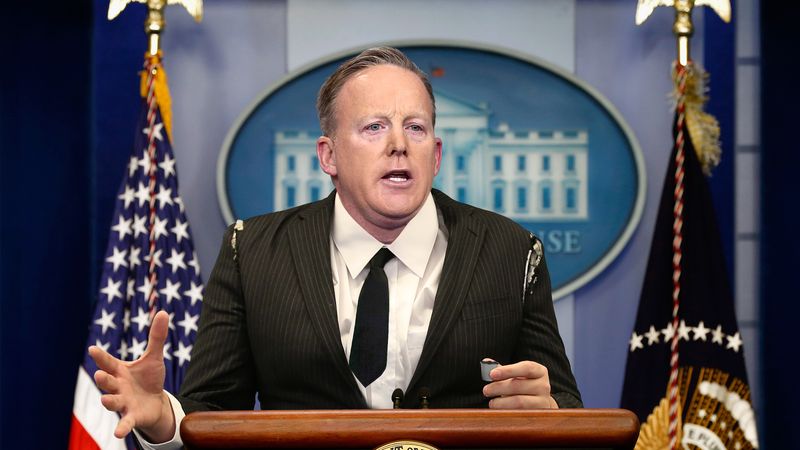 The relationship between Trump’s administration and the press has gotten off to a rocky start, and it doesn’t look like things will be getting better any time soon. In the latest installment of what has become an all-out feud, Sean Spicer walked into today’s daily news briefing wearing a suit three sizes too small and drinking water from a thimble in an attempt to make the press think he is growing.

There’s no doubt about it: Spicer wants the media to fall in line, and he’s not above using intimidation tactics to get it done.

“Hmm, this jacket seems tighter than it did yesterday,” said Spicer immediately after stepping up to the podium of the White House Press Room, wearing a jacket that he bought in the boys’ section at Macy’s. “I must be growing bigger and stronger while all of you stay the same size. That is the only explanation.”

“You weren’t expecting such a big man, now were you?” Spicer continued, making direct eye contact with the New York Times reporter in the front row while smoothing the tiny little tie he fashioned by cutting down the one he wore yesterday.

After Spicer began the briefing with an update on Trump’s weekend schedule, a spiel that was riddled with sidebars about how badly he needs to find a tailor for giants, the Associated Press asked a question about Trump’s number of controversial executive orders, but the press secretary wasn’t about to give them an inch.

“Sorry, Associated Press,” Spicer interjected, “but it’s hard to hear you from all the way up here…in the sky.” He took a sip from his thimble and held it up in the air, showing the room that it was empty, and continued, “A single one of these cups of water used to easily quench my thirst, but now it takes dozens before I am satisfied.”

“This thing must hold about a gallon,” Spicer added, marveling at the thimble.

Wow. Spicer’s bold new approach reads loud and clear: He is not about to back down from the press, and he doesn’t mind using fear as a tool to get what he wants.

“It looks like you won’t have little Sean to kick around anymore, now does it?” Spicer later interrupted as a CBS reporter began a question. “He has been replaced with the big, hulking Sean you see before you. Be careful how you talk to me, media, for I am not sure how much larger I have yet to grow.”

Yikes. This much hostility between Trump’s administration and the media cannot be a good sign. Here’s to hoping the two sides can become civil sometime soon, if only for the sake of the people.