A Piece Of History: The Taffy Machine That JFK Died In Trying To Stretch Himself Into An NBA Player Is Finally Getting Its Own Exhibit At The Smithsonian 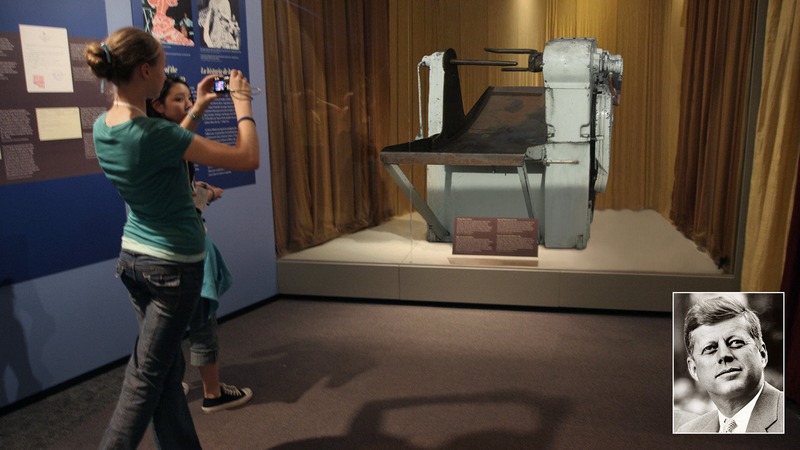 The assassination of President John F. Kennedy remains one of the most shocking and tragic events in American history. Now, as we approach the 54th anniversary of his untimely death, a rare artifact from that fateful day will go on display for all to see: After over a half century, the Smithsonian will finally exhibit the taffy machine that JFK died in while trying to stretch himself into an NBA player.

The National Museum of American History has announced plans to showcase the taffy machine as part of its new exhibit titled Stretched To Death: JFK And The NBA. The exhibit will present numerous fascinating artifacts from our 35th president’s final day and will, for the first time ever, give the American public an up-close look at the contraption that altered the course of history and tore President Kennedy limb from limb in a misguided effort to add several inches to his height so that he could earn a tryout with the Boston Celtics.

Whether you were alive at the time or have simply seen the grainy amateur video footage since, it’s impossible to forget that moment in 1963 when JFK entered a candy shop in Dallas, caught eye of an industrial taffy puller, and informed Vice President Lyndon B. Johnson that he had found the perfect way to become tall enough to dominate in the NBA. After throwing on a pair of significantly longer pants in anticipation that he’d soon need them, JFK famously told John Jr., “Daddy’s about to be so tall that it’ll make Wilt Chamberlain look like a goddamn dwarf,” before pump-faking past several Secret Service agents and diving headfirst into the machine, shouting, “Boom shakalaka!” as he was sucked into its powerful mechanisms. That’s when tragedy struck, as the rotating metal rods immediately mashed and mangled the president’s body into an unrecognizable heap of flesh, killing him instantly.

Now’s your chance to see that very machine in person, which has been perfectly preserved by the Smithsonian and still contains several of JFK’s teeth that were embedded in its gears. In addition, visitors can view Jackie Kennedy’s famous pink bloodstained Celtics jersey, as well as the photo of LBJ being sworn in as president with his hand on the regulation size basketball that he had prematurely bought for JFK as a congratulatory gift.

While this is an undeniably sobering exhibit, it’s one that will leave you with a new reverence and respect for the former president and a better understanding of his legacy. If you’re a history buff, or just someone who wants to experience American history in person, then you need to plan a trip to D.C. ASAP to take part in this can’t-miss experience.