A Piece Of History: The Terrifying Clown Mask That Frightened JFK To Death When Jackie Kennedy Put It On As A Prank Is Coming To The Smithsonian 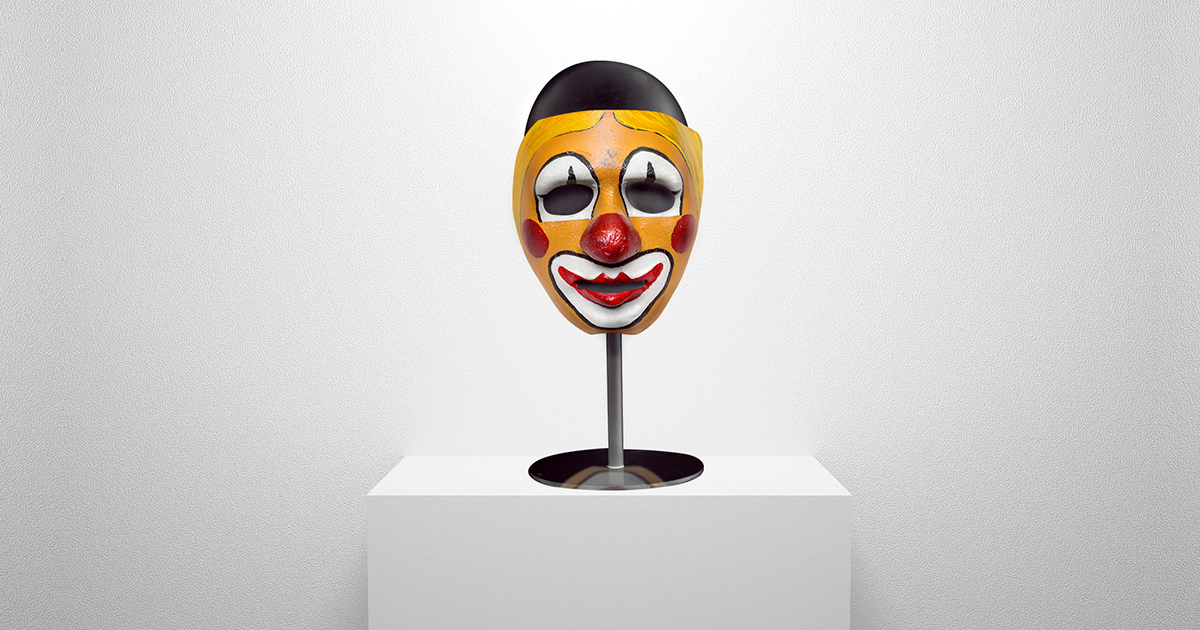 The tragic death of President John F. Kennedy remains one of the most shocking days in United States history, but now, for the first time in over 55 years, an incredible artifact from that fateful event will be put on display: The terrifying clown mask that frightened JFK to death when Jackie Kennedy put it on as a prank is coming to the Smithsonian.

Earlier today, the National Museum Of American History announced a new exhibit that will feature the creepy rubber clown mask Jackie Kennedy Onassis wore on November 22nd, 1963, that tragically scared the 35th president to the point of cardiac arrest. The exhibit will take museum visitors moment by moment through the terrible day when Jackie O, bored after finishing up a game of tennis, found the mask in a dusty box labeled “HALLOWEEN STUFF,” put it over her head, and hid behind a couch in the Presidential Bedroom Suite, unwittingly setting one of our nation’s greatest tragedies in motion.

The heart-wrenching exhibit will include audio excerpts from interviews with Jackie Kennedy in which the former First Lady narrates the ill-fated prank, describing in devastating detail how, after she popped out from behind the couch and shouted “BOO!”, her husband immediately went wide-eyed with terror and evacuated his bowels, clutching his chest as he backed away from the grinning clown visage that would turn out to be the last thing he’d ever see. In the emotional clips, Jackie recounts the heart-wrenching moment when Kennedy, shaking with fear, croaked out “Dracula?” and then dropped slowly to the floor, whimpering “Oh god, he finally found me,” before fatally succumbing to the scare.

Additionally, a video reenactment of the terrible event will allow viewers to experience the moment when Jackie ripped off the mask and rushed to her husband’s side. “Why have you taken the shape of my wife?!?” an actor playing Kennedy screams in anguish in the clip. “I just want to live!” The President then begs for help from God, yelling “Smite this creature!” while Jackie insists that it was just her under the mask, and that all she’d wanted to do was scare him a little. “You can’t fool me, deceiver!” Kennedy responds angrily. “Away, beast! Away!” The video then shows the President swatting meekly at his wife with both hands as he writhes on the carpet, his face growing paler and paler as death overtakes him.

At the conclusion of the exhibit, visitors will be able to check out never-before-seen photos of Jackie Kennedy sobbing as doctors wheel her deceased husband away on a dolly, his corpse pitifully stiffened in the fetal position, his mouth a ghastly rictus. Visitors will also get to see the original print of the unforgettable image of the First Lady still clutching the clown mask as she accompanies her husband’s casket on Air Force One, struggling to remain composed as Lyndon Johnson is administered the oath of office just feet away.

It’s truly exciting that people can finally gaze upon this important American relic in person, and everyone should try to go see it if they can, as it may very well be the most consequential clown mask in the history of not only this country, but the world. This is something you don’t want to miss!