A Public Nuisance: Barack Obama Was Kicked Off Of A White House Tour For Shouting, ‘I Already Know That,’ After Everything The Tour Guide Said 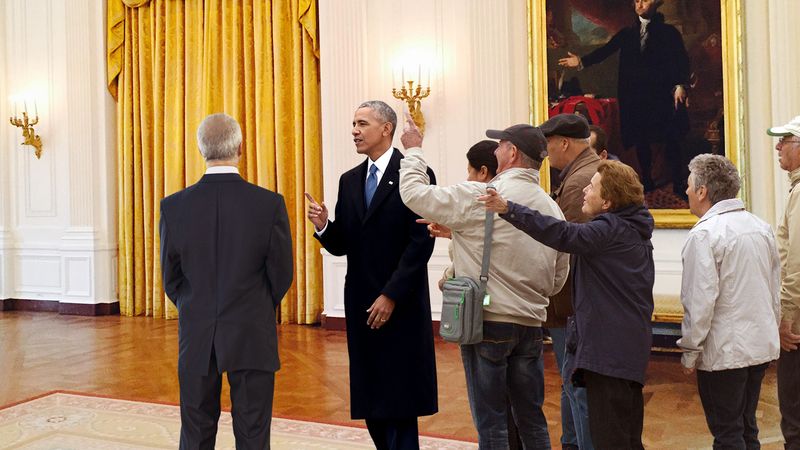 It’s been over a month since the end of Barack Obama’s presidency, but it looks like in that time, the former commander-in-chief has found it a bit challenging to adjust to civilian life. Earlier today Barack Obama was kicked off of a White House tour shouting, “I already know that!” after everything the tour guide said.

Yikes! It looks like this former president has become something of a public nuisance.

Obama’s disruptions began only seconds into the tour, when the guide announced that they were standing in the East Wing of the White House and Obama screamed, “Obviously! I knew that already!” When the tour guide attempted to start speaking again, Obama interrupted her another time by yelling, “I know exactly where we are! It’s simple for me to get around in here!”

Members of the tour group said that Obama continued to shout, “I know that already,” at the guide until security forcibly removed him from the White House premises 45 minutes later. From facts about the White House’s history to the function of different rooms, Obama audibly declared that he already knew about everything, including when the tour guide informed him his loud outbursts were infringing on White House tour policy.

“The shouting completely ruined the tour,” said Marna Robins, a nurse from New York who was on the tour with President Obama. “Every time the tour guide gave us some fact about the White House, he would just belt out stuff like, ‘That’s not new to me!’ or ‘Tell me something I don’t know!’ The guide tried to show us a bust of Abraham Lincoln, and Obama just screamed out, ‘I know about that statue already! I took a nap behind that statue a lot, so don’t tell me about it!’ It was impossible to learn anything, and I’m glad he got kicked off the tour.”

Paul Moskowitz, a teacher from Arizona who was also on the tour, said that Obama kept volunteering extra information while the guide was trying to speak.

“The tour guide tried to tell us that the Lincoln Bedroom was for guests of the White House,” recalled Moskowitz, “and Obama just made a big farting noise with his mouth and said, ‘Sometimes the president will sneak in there at night and sleep under the bed. I did that. Don’t tell me things I already know.’ He was awful.”

Obama’s disruptive behavior was apparently not limited to shouting out of turn either. According to the tour guide, Obama also derailed the tour by frequently turning toward a German tourist standing next to him and taking a close-up photograph of his face using a very bright flashbulb. Obama loudly informed the tourist that he wanted the photograph of his face so that he could frame it and hang it on something called his “Wall of Immortals.” When the tour guide informed Obama that flash photography was not permitted on the tour, the ex-president said, “I already know that,” before taking another photograph of the man’s face.

Fortunately for the tour group, security eventually arrived and carried a kicking and screaming Obama out of the White House. The former commander-in-chief kept screaming, “I didn’t learn anything!” as he was thrown out of the front door and told not to come back. Looks like life after the presidency is a little bit more complicated than Barack Obama thought!