About Time: Twitter Is Finally Putting A Disclaimer On Every Tweet To Remind Users That All Tweets Are Kind Of Stupid 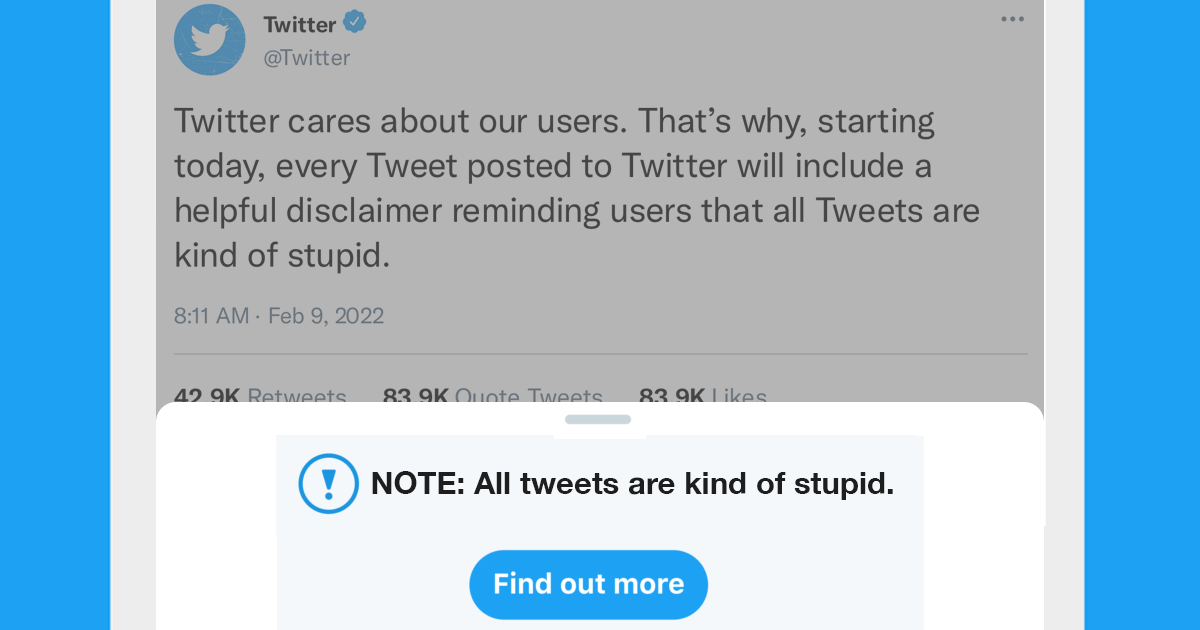 In recent years, social media has devolved into a cesspool of misinformation, harassment, and other bad behavior, but it finally looks like one major platform is taking action to get things under control: Twitter has announced they are adding a disclaimer to every tweet reminding users that all tweets are kind of stupid.

Yes! This is a huge step in the right direction.

The official Twitter account announced the new policy earlier today, explaining that from now on the disclaimer will be issued with every Tweet posted to the site, whether it contains outright misinformation, bullying, a meme oversimplifying a complex sociopolitical issue with the caption “THIS,” an observation about how men will go to extraordinary lengths to acquire a PS5 but won’t go to therapy, or any other expression of the ass-brained nonsense that’s become inherent to the format. The disclaimer will also be retroactively added to every Tweet ever posted.

“If it’s on Twitter, it’s pretty stupid,” said Twitter CEO Parag Agrawal in a press conference this morning, citing examples such as Tweets pitifully begging for help getting a user up to 10,000 followers, or Tweets starting with “Something we don’t talk about is” followed by a description of something everyone talks about literally all the time. “So we decided there’s no reason to try to sort out which Tweets are harmful when, by the very nature of being in Tweet form, they are all automatically a little dumb. We felt that if we are going to claim that we value and respect our users, it’s important to remind them of this each and every time they see a Tweet.”

When a user clicks on the new disclaimer, they’re redirected to the following detailed explanation: “Twitter reminds our users that all Tweets are kind of stupid. The character limits force them to be truncated in weird ways so the wording is always awkward and they all sound arrogant and self-important. The majority of Tweets posted to the site do not contain any original ideas but instead typically either present a stale observation using a novel format that’s already been beaten to death or just outright steal and reword someone else’s opinion to make it seem like the user thought of it on their own. Further, the long multi-part threads which have gained popularity with science and political accounts in recent years pretty much defeat the entire purpose of Twitter, which is to keep things short, and they distill analyses of incredibly complicated societal issues into crass, sensational snippets that prioritize virality over sound reason. Anyone who primarily gets news and information from Twitter is an idiot, or at the very least an avid consumer of idiocy. This is not a place to go to become smart or well-informed. This is Twitter, a place for idiots.”

By simply reminding users that Tweets are intrinsically asinine, Twitter is taking a huge step towards correcting many of the urgent problems that currently plague social media. Kudos to Twitter for looking out for the welfare of its users and helping them realize just how stupid everything is. Here’s hoping Facebook and other social platforms will follow suit!