Absolutely Devastating: The 30-Foot Burmese Python Roger Federer Received As A Prize For Winning Wimbledon Has Swallowed Him 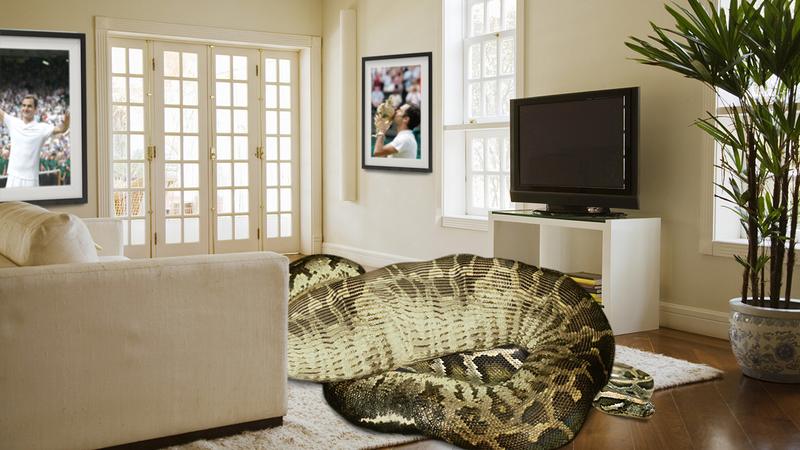 Tennis lost a champion today, and in the most cruelly tragic way: Roger Federer has been swallowed by the 30-foot Burmese python he received as the grand prize for winning Wimbledon.

This is a heartbreaking blow to the sports world.

When he clinched his Wimbledon victory in July, Federer was overjoyed to receive the 30-foot carnivorous snake. The tennis great coiled the snake around his torso and neck in celebration, and fed it white mice as the crowd cheered and applauded. When reporters asked Federer what it felt like to be crowned the best tennis player in the world, Federer shouted, “I played my best to win this big snake, and now it is my big snake!”

Sadly, that joyful moment of getting a giant pet python directly led to today’s horrific event.

This morning a housekeeper was cleaning Federer’s Burmese python enclosure when they noticed a human-size lump inside the snake. Animal control experts believe that Federer entered the snake cage to admire his Wimbledon python up close and then was constricted to death and swallowed by the serpentine predator.

Unfortunately, those close to the 19-time Grand Slam champion knew all too well that this tragedy could happen at any time. Friends of the athlete say that the snake had attempted to devour him every time he went in the snake pen, but until now Federer always managed to just barely wriggle away. During one close call back in August, the snake managed to swallow Federer from the head to his waist before his wife pulled him free.

It seemed like Federer was living a charmed life, only getting partially consumed by a snake, but never completely swallowed, but the good times weren’t to last.

Now Roger Federer is no more, and sadly the deceased athlete will not even receive a proper burial. There’s no way of retrieving his corpse without cutting open the snake, which is out of the question for an esteemed trophy reptile like this prize Wimbledon python.

The snake is being relocated to an exhibit on the grounds of the All England Club, where visitors will be able to feed it gerbils in honor of the late, great Roger Federer. If you’re a tennis fan, you’re going to want to pay a visit in memory of this incredible player. RIP to one of the greats.