Addressing The Crisis: The Department Of Education Now Recommends That Schools Suffering From A Teacher Shortage Have Their Kids Take Penn & Teller’s Masterclass Instead 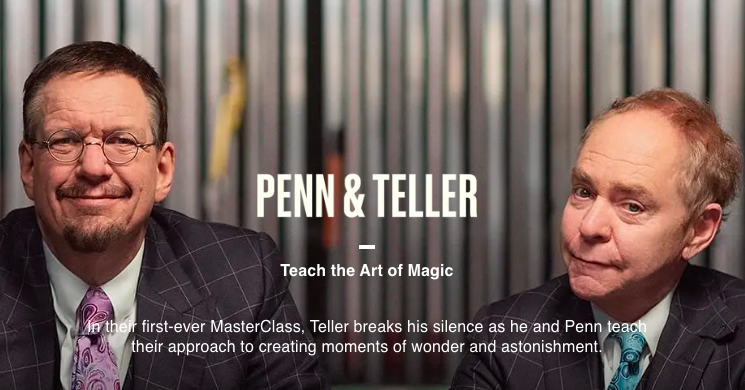 Schools across the country are struggling with a crisis-level shortage of teachers, as interest in the profession rapidly declines due to low-pay and exhausting hours. Now, to ease pressure on districts that can’t find enough educators to fill their classrooms, the federal government has stepped in with a much-needed solution: The Department of Education now recommends that schools suffering from a teacher shortage have their kids take Penn & Teller’s Masterclass instead.

This is absolutely amazing. While a teacher in every classroom would be ideal, we can be thankful that every school has Penn & Teller’s Masterclass as a backup plan.

In a statement released earlier today, Miguel Cardona, Secretary of the Department of Education, advised public schools facing a shortfall of teachers to enroll students in the “Penn & Teller Teach The Art Of Magic” Masterclass series. The 17-part course, covers the essentials of close-up magic, including sleight of hand card tricks, mentalism, misdirection, and will serve as many children’s entire school curriculum this year, and possibly next year, until such a time as administrators are able to hire enough teachers to fill every classroom.

“With the help of Penn & Teller’s thorough explanations of card, coin, and cup-and-ball magic, no child will be deprived of their right to an education as we work to solve our country’s teacher shortage,” explained Cardona, who also recommended that schools spread out the three-hour runtime of the instructional magic series over the course of an entire school year, if possible.

“Fortunately for school districts with strained budgets, the Masterclass only costs $15, which, for a classroom of 20 or more students, is a highly affordable solution, especially when compared to a teacher’s salary and benefits,” Cardona continued. “Until more educators apply for the thousands of teaching positions left unfilled across America, the duo behind the most successful magic residency in Las Vegas will ensure that every last one of our kids graduate with the ability to pull quarters behind people’s ears and make a ball appear under a different cup from the one you thought it was under.”

Touting the magic course’s effectiveness as a substitute for actual in-person educators, Cardona cited McGinn Elementary School in New Mexico, where the Penn & Teller Masterclass is currently being implemented until they’re able to hire more teachers. So far, over 80 second grade students at McGinn have reached “Chapter 11: Rope Tricks,” just by sitting together in an adult-free classroom and watching a video monitor playing the Penn & Teller course. While their rudimentary math and writing skills are unfortunately declining, McGinn administrators are reporting that nearly 90% of their second graders are demonstrating proficiency at rope-based magic, such as The Impossible Knot, The Jumping Knot, and one mind-blowing trick where they cut a piece of rope in half and then magically reverse the act, restoring the rope to its original length.

We are on our feet and cheering right now! This is bound to be a relief to any school unable to staff their faculties. Let’s hope the teaching profession starts attracting more people soon, but until then, it’s a comfort to know the highest education agency in the U.S. is looking out for our students and giving them the tools they need to amaze and astound!