Almost There! Michael Phelps Is Close To Having Enough Gold Medals To Redeem Them For A Free Bike [UPDATED] 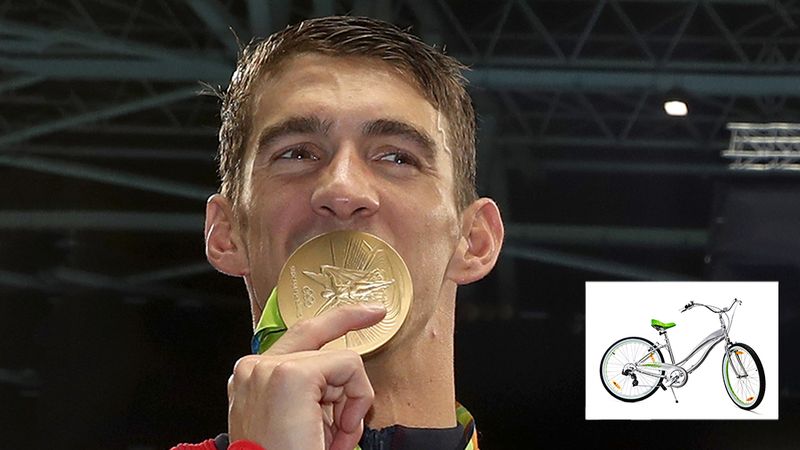 It may be his final Olympics, but the future looks bright for Michael Phelps.

After placing first in Sunday’s 4x100m freestyle relay, the most decorated Olympian of all time officially brought his gold medal count to 19. The win was an emotional one for Phelps as his career enters its twilight phase, but it also marked an important milestone: If he can win gold just one more time, he’ll officially have enough gold medals to redeem them for a free bike.

Yes! Time to finish what you started, Michael!

The window is closing for Phelps, 31, to add many more gold medals to his tally, but luckily he only needs one more in his three remaining events to hit the 20 required for the Huffy six-speed. While the stereo with a six-CD changer available at the 25-gold-medal level is almost certainly out of reach, there is no question that if Michael can climb the podium one last time, he will be more than pleased with the Huffy that comes with pegs and mountain bike tires for riding over dirt.

This is a testament to not only Phelps’ prowess in the swimming pool but also his incredible patience. When Michael won his 14th gold medal in 2008, many speculated that he’d trade them in for a Razor scooter or karaoke machine. While the temptations have been numerous, Michael has so far avoided becoming this generation’s Mark Spitz, who cashed in each one of his gold medals for a spider ring immediately after winning it.

Wow. You can’t really blame the Olympians who trade in early for a Chinese finger trap or mini gumball machine, but Phelps should be commended for maintaining his focus. He’s spent four Olympic games fighting for that bike, not to mention the countless training hours. So hopefully when he returns back home to the U.S. in two weeks’ time, it will be with a brand-new, tricked-out Huffy in hand. After his historic swimming career and unbreakable competitive spirit, he’s truly earned it.

UPDATE: Michael Phelps has just ended his historic Olympic career with 23 gold medals. He redeemed 20 of them for the Huffy bike but was crushed to learn it will take 14-18 weeks for processing and shipping. With his leftover medals, he got a glow in the dark frisbee.