Amazing! Gmail Will Now Warn You If The Person You’re Trying To Ask For A Favor Actually Hates Your Fucking Guts 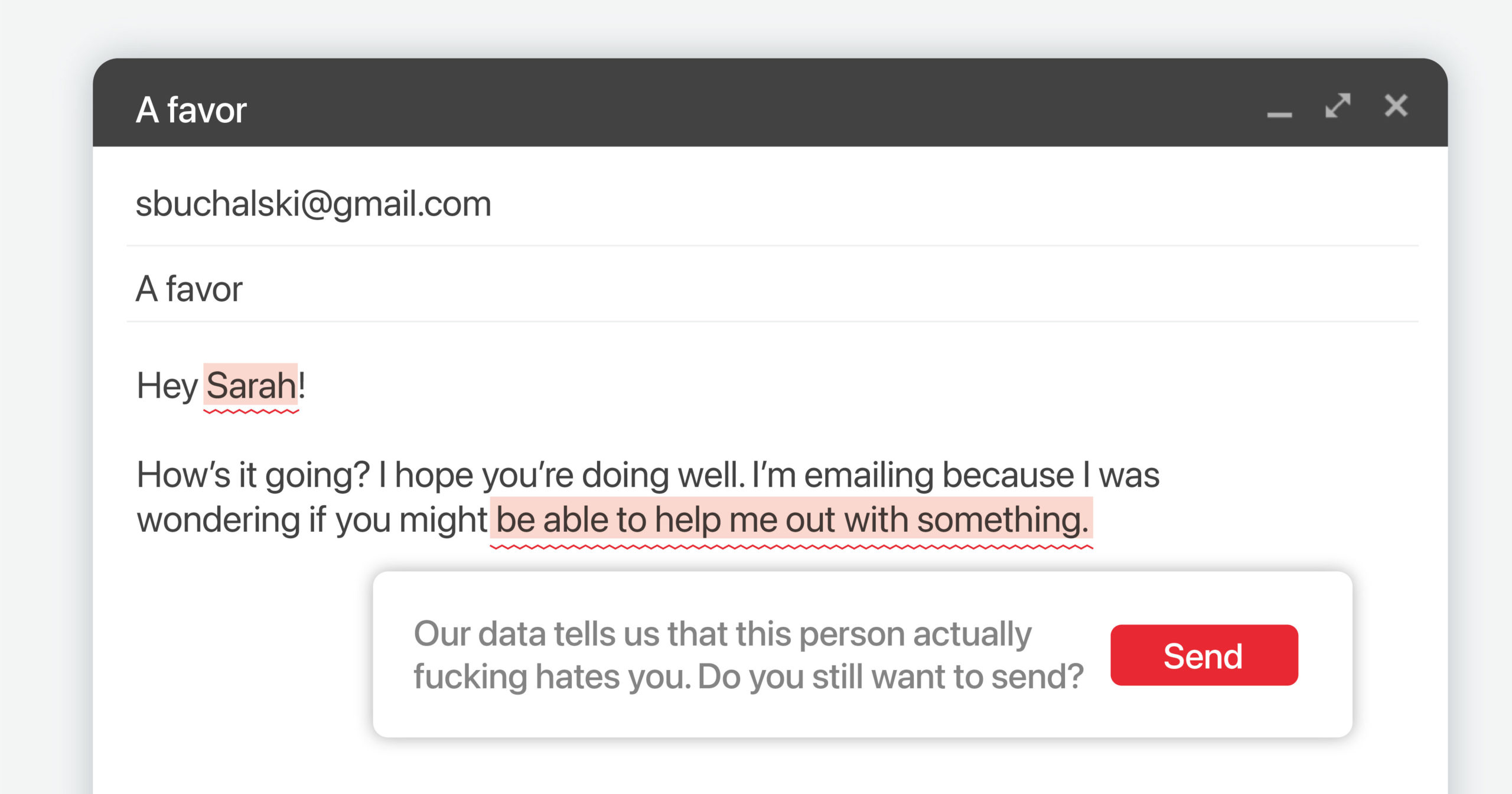 Reaching out to someone for a favor is a stressful experience that can fire up all sorts of social anxieties. Thankfully, one email service has stepped up to ease your insecurity: Gmail will now warn you in the person you’re trying to ask for a favor actually hates your fucking guts.

Amazing! This is a total game changer.

From now on, whenever your drafted email includes a phrase like “Just wondering if you’d…” or “Thought I’d reach out to see if…”, Gmail’s awesome new feature will kick into gear to determine whether the person you want something from would actually like to help you, or if they’d straight up rather you drop dead than ever send them a message.

The feature works by analyzing data from your inboxes and chat records to determine what the other person likely thinks of you, and if the software finds any red flags – for instance, a history of the recipient ignoring your previous emails, or Google Hangouts messages where they secretly referred to you as an “annoying know-it-all” – Gmail will prompt you with a text box that reads “Our data tells us that this person actually fucking hates you. Do you still want to send?”

Hell yes! This is going to save people from so much embarrassment.

Better yet, the feature also offers several fail-safes to prevent you from further mortification if you overrode their initial warning not to send an email. That means that even if you brushed past Gmail’s suggestion to avoid asking someone you interned with nine years ago to look over your resume and put in a good word for you with their hiring managers, Gmail flat out won’t let you shoot them a follow up email the next week to see if they’ve had a chance to check out your materials. Instead, a warning message reading, “THIS PERSON LITERALLY DOESN’T GIVE A SHIT ABOUT YOU,” will start flashing on your screen, preventing you from hitting “send.”

Plus, this new feature will even evaluate whether or not your request seems reasonable given what Gmail’s data has to say about your relationship to the recipient. For instance, if you try to ask your former high school classmate whose party invitations you’ve automatically deleted since graduation to photograph your wedding for free, a prompt will appear suggesting, “Maybe offer to pay them? If not, there’s a 89% chance they will start texting your mutual friends about what a weird thing you just did.”

This is so cool! If you’ve ever worried if the person you’re emailing actually thinks you fucking suck, you’ve just been thrown a major life raft. Shout out to Gmail for raising the bar once again!