An Enchanted Journey: Barron Trump Stepped Through An Old Closet In The White House And Into A Magical Kingdom Where He Met A Faun With Bernie Sanders’ Upper Body 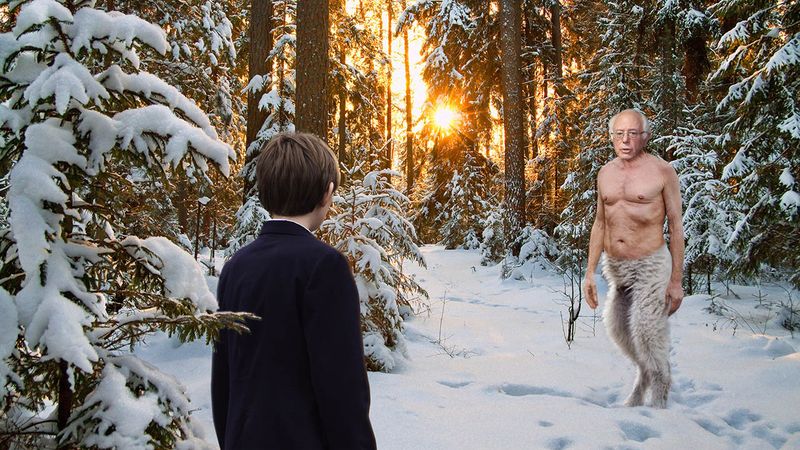 Now that his dad is president, Barron Trump has to spend a bunch of time at the White House, which can be a pretty boring place for a kid. But after making an incredible discovery, his latest visit has gotten way more exciting: Barron Trump stepped through an old closet in the Lincoln Bedroom that leads to a magical kingdom where he met a faun with Bernie Sanders’ upper body.

Wow! It looks like Barron has stumbled upon an incredible world of adventure and mythical creatures!

Barron found the enchanted closet while playing a game of hide-and-go-seek with his big sister Tiffany. The young Trump hid inside the closet, closed the door, and began moving to the back. Pushing his way through several winter coats and his father’s “Apprentice Season 2” crew jacket, he suddenly brushed his hand on what felt like pine needles. Moments later he found himself stepping through the back of the closet and into a snowy glade in a forest!

“Son of Adam, what are you doing here?” asked a faun standing right in front of him, apportioned with little goat legs, pointy goat ears, and the upper body of U.S. Senator Bernie Sanders. “I’m afraid this is no place for a Son of Adam. What we have in this kingdom is a situation where the top one percent of the top one percent of wizards own as much dragon dust as the bottom 90 percent. This is immoral, it is an embarrassment, and the Winter King should be ashamed of himself. Go, Son of Adam! Flee the systemic injustice of this place while you can!”

Barron Trump asked the faun with Bernie Sanders’ upper body who the Winter King was, but he just launched into a stump speech about the kingdom’s broken healthcare system in a thick Brooklyn accent.

“Minotaurs in this kingdom can’t go to the Swamp of Good Health!” the faun exclaimed, waving his arms emphatically. “The Sphinx who guards it won’t let them in, just because they are Minotaurs! Look, here’s what the Sphinx can do if you’re a Minotaur. He can look at you and say, ‘Well, because you’re terrifying and live in a labyrinth, you’re too big of a risk to let in, so, sorry, no lifesaving swamp mist for you.’ It’s despicable.”

At that moment a white hawk flew overhead, and the faun with Bernie Sanders’ upper body suddenly stopped speaking until the bird had passed.

“How can the Winter King call this an enchanted kingdom when his hawks can collect information on us without permission from the Council of Elves?” asked the faun. “It is not safe for you here, Son of Adam. You must go! Before the Winter King throws us both in his secret dungeon, and lets us languish there for years without formally charging us with anything or allowing us to seek the counsel of a talking beaver. Go now!”

The faun with Bernie Sanders’ upper body pushed Barron through the closet, and he tumbled out onto the floor of the Lincoln Bedroom where Tiffany was looking under the bed. “There you are,” she said. “I’ve been looking for you for hours. Were you in the closet that whole time?” But Barron didn’t answer his sister. He just stared at the closet in utter amazement at what he had just experienced.

Wow! Looks like Barron Trump has discovered an enchanted kingdom with magical creatures and what seems like pretty severe economic inequity. We can’t wait to see what adventures await him. Way to go, Barron!