An End To 113 Years Of Bloodshed: Merriam Webster And Oxford English Dictionary Have Finally Agreed That A Patio Is An Area Adjoining A House Used For Outdoor Lounging 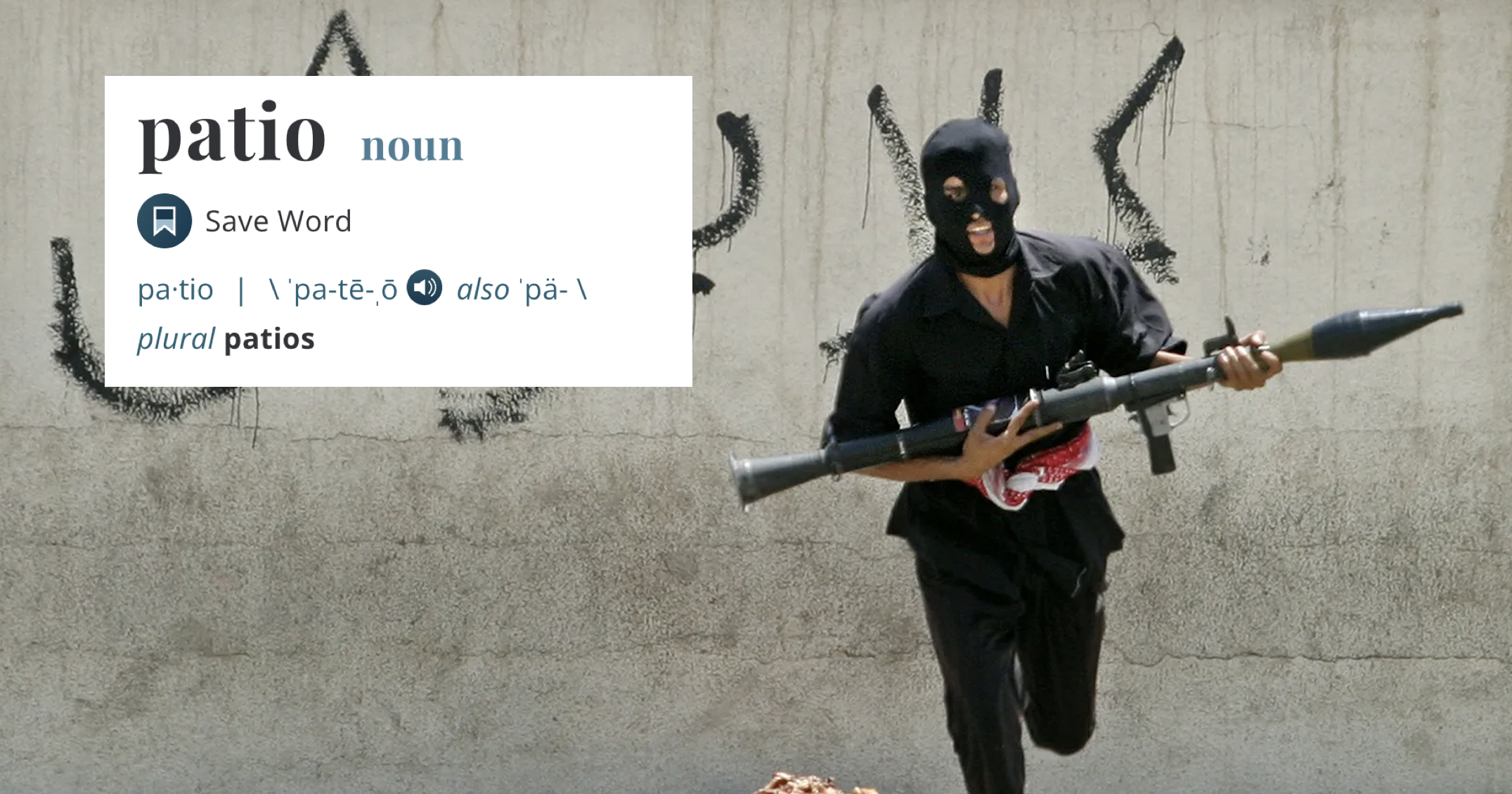 The world became a slightly less violent place today, because two organizations at the heart of a long and vicious conflict have at last found a way to reconcile their differences: Merriam Webster and the Oxford English Dictionary have finally agreed that a patio is an area adjoining a house used for outdoor lounging.

Awesome! With this, the healing can begin.

In a negotiations breakthrough this morning after months of bilateral peace talks, representatives from Merriam Webster and the Oxford English Dictionary signed an accord stating that the word patio, a noun, means “an area adjoining a house used for outdoor lounging,” bringing to a close more than a century of bitter hatred and brutal internecine violence. The truce comes a full 113 years after the Oxford English Dictionary first released its O and P volume asserting that a patio is “a flat hard area outside, and usually behind, a house where people can sit,” immediately igniting a fierce doctrinal dispute with Merriam Webster’s long-standing position that a patio is “a recreation area that adjoins a dwelling, is often paved, and is adapted especially to outdoor dining.” The ensuing bloodshed saw dogmatic adherents of both dictionaries engage in frequent bombings of opposed printing presses, mass public dictionary burnings, and a seemingly relentless campaign of broad-daylight copyeditor assassinations, but with today’s compromise, they’ve finally shut the door on one of the worst inter-dictionary vendettas in modern publishing history.

In addition to the powerful symbolism of agreeing on a new definition for the word patio, the talks have also succeeded in brokering a number of concessions that would have been unimaginable even a year ago. Merriam Webster has revealed the burial site of the seven OED typesetters vanished during the infamous “Afternoon of Spilled Ink” abductions, while the OED has publicly acknowledged its culpability in the “Patio Thursday” firebombing that killed all present at a tavern popular with the Merriam Webster marketing staff. Merriam Webster will also paint over the controversial mural of a patio strewn with dead rats bearing the letters OED over the text “Always Adjoining A Dwelling, Never Outside A House” on their Springfield, MA headquarters, and the OED will similarly develop a new logo to replace its current one of a kneeling, blindfolded Noah Webster being messily decapitated by an anthropomorphic dictionary. Perhaps most strikingly of all, the two publishers jointly laid a wreath at a site that will soon host a monument depicting two children lounging outdoors in an area adjoining a house, cementing their shared commitment to a future free of strife over the definition of the word patio.

There were times when we truly thought we’d never live to see this day!

It’s such a relief that dictionary users can finally define the word patio to strangers without having to worry that saying the wrong thing will get a truck tire soaked in gasoline forced over their shoulders and set ablaze by a furious mob. Nothing can undo the countless atrocities committed in the name of this early 19th century word derived from a Spanish term denoting an inner courtyard, but with this historic compromise, a day in which Merriam Webster readers and Oxford English Dictionary readers can peacefully eat in the same restaurants, learn at the same schools, and perhaps someday even lounge on the same patios feels closer than it ever has before.

Kudos to these dictionaries for ending generations of cyclical slaughter and reprisal. May the peace brought about by this new definition create a better future for all who will ever explain what a patio is!