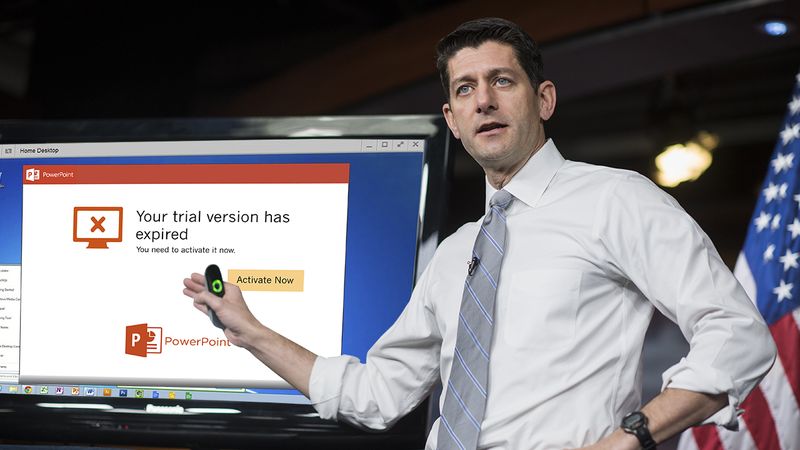 Well, this is a major blow to a party that’s already been struggling to get its legislation off the ground.

With the complete failure of their healthcare proposal, Republicans have been forced to return to the drawing board and rethink their approach to the items on their legislative agenda. But it looks like they just experienced their toughest setback yet: Paul Ryan’s free trial of Microsoft PowerPoint has expired.

Yeesh. Things are not looking up for the GOP.

“We were hoping to quickly get a new healthcare proposal in place for the American people,” the speaker of the House said during a press conference this morning. “But the unfortunate fact of the situation is that there was a significant amount of information stored in the presenter notes of my PowerPoint slides, and that information became inaccessible to me when my 30-day free trial officially ended yesterday at noon.”

Oof. It definitely seems like a major wrench has been thrown in the GOP’s plan to advance their policies under the Trump administration.

With Republicans making no headway opening Ryan’s PowerPoint 2016 files with the PowerPoint 2003 version that House Majority Leader Kevin McCarthy has installed on his Gateway desktop, it doesn’t look like things will be solved anytime soon. “No one is more dedicated to improving this great country than I am,” Paul Ryan said. “But I am not shelling out over $100 for the Microsoft Office Suite. It comes bundled with Excel, which I don’t even need, and there’s no way to just buy PowerPoint. The only thing I can remember about my new plan is that I had one slide with a pie chart split between discretionary spending and something else, but I can remember how much of the chart each had.”

When asked if he could just try using a different application, Paul Ryan was quick to shut down any notions that this was an easy fix. “I already tried opening my bold new vision for America in Google Slides, but the fonts simply didn’t transfer over correctly,” he explained. “All the images for a better tomorrow were in the wrong places, and none of the animations—which I spent hours on—worked at all.”

Yikes. There’s just no way around it: It’s going to take Republicans a while to come back from this one.