Beautiful: The Spirit Of Ted Kennedy Just Appeared Before The Senate To Plea For Universal Healthcare And Give Them Instructions On How To Break Him Out Of Purgatory 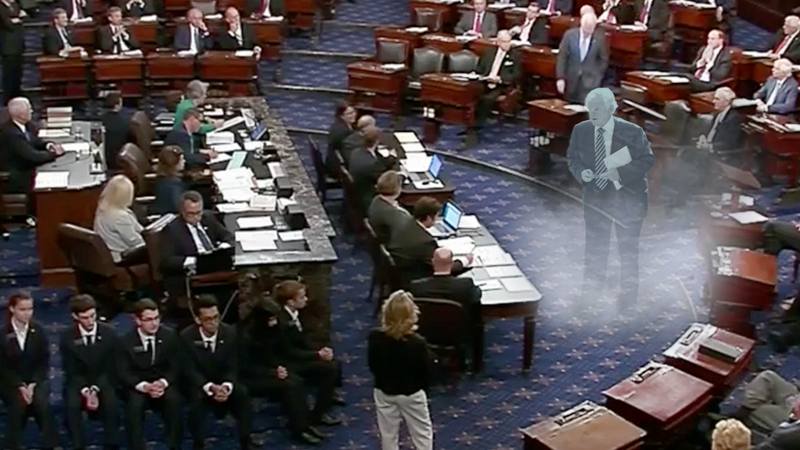 The Senate’s attempts to repeal the Affordable Care Act has underlined just how deeply divided and rancorous politics have gotten in Washington. It seemed like there would be no end to the vicious rhetoric and petty infighting that have pockmarked the Senate chamber until today, when something incredible happened: The spirit of Ted Kennedy appeared before the Senate to plea for universal healthcare and also give them instructions on how to break him out of purgatory.

Wow. What a beautiful gesture for some truly troubling times.

Senators from both parties were taking to the floor to bicker or score tawdry political points, with the healthcare of millions hanging in the balance, when a loud wail silenced everyone, and the wispy, flickering spirit of former senator Ted Kennedy descended through the ceiling to hover a few feet above the majority leader’s lectern. With the rapt attention of every man and woman in the room, the restless ghoul began to speak.

“This chamber must put its differences aside to ensure no American will ever be denied the right to healthcare,” the slowly bobbing Kennedy apparition said. “But first let’s focus on freeing my soul from purgatory, the endless nothingness where my essence has been imprisoned since I passed. It’s crucial that one of you takes care of some earthly matters for me so my soul can continue on it’s journey, and then, and only then, you absolutely must pass a single-payer model.”

Wow. It’s so inspiring that Ted Kennedy traveled all the way from the endless, desolate plains of purgatory to return to the Senate and lead the charge for health insurance for all Americans and also spend 15 uninterrupted minutes badgering Senator Mark Warner of Virginia to leave Washington at once to procure him the eight pints of black ram’s blood needed to pay limbo’s faceless gatekeeper and free his soul once and for all.

While the appearance of the phantom elder statesman briefly brought much-needed civility and leadership back to the chamber, not all Republicans simply let Kennedy pontificate about the merits of universal healthcare without debate. Senator Rand Paul of Kentucky stood and challenged the between-two-worlds senator, grilling the translucent Kennedy on how hospitals would be able to accommodate millions of new patients while not reducing quality of care, to which Kennedy responded that they can worry about that after Paul goes to the Kennedy compound in Hyannis Port, finds the rose that blooms only in the drought, and gives it to the one-eyed beggar child who has roamed the streets of Boston for 1,000 years.

After Kennedy addressed the chamber for nearly an hour, a giant spectral caterpillar emerged from the ground, ate his spirit, and puked him out, but Kennedy’s clearly frightened ghost didn’t let that stop him from giving a couple more directions to the senators before suddenly letting out a bloodcurdling scream and vanishing into a puff of sulfur. According to various sources, the words “save me” were burned into the Senate floor right where the ghost of Ted Kennedy stood.

Simply amazing. You have to hand it to Ted Kennedy’s spirit for momentarily commenting on healthcare before informing the Senate how they can help him escape from purgatory. To the spirit of Ted Kennedy, we applaud you!