Beautiful! When This 7-Year-Old Boy Could No Longer Afford Treatment For His Brain Tumor, Mitch McConnell Dressed Up As Batman And Wheeled Him Out Of The Hospital 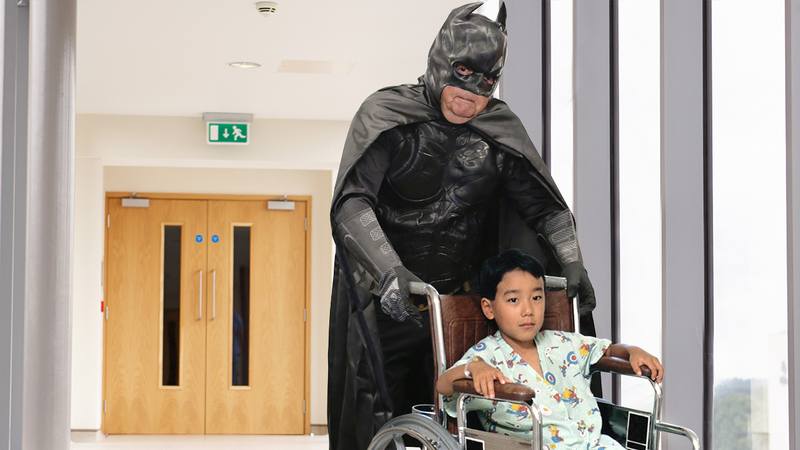 Life has been extremely difficult for 7-year-old Aaron Burkhart ever since he was diagnosed with a brain tumor five months ago. To make matters worse, Aaron’s family lacked health insurance and was soon unable to pay the medical bills for his expensive treatments. Things seemed bleak, but that’s when Aaron got the surprise of a lifetime. When Sen. Mitch McConnell heard that Aaron’s family could no longer afford the treatment for his brain tumor, he visited Aaron’s hospital room dressed as Batman and wheeled him out of the hospital.

Beautiful! It looks like Mitch McConnell found a way to make a sick boy’s last day of medical care a truly special one!

Aaron’s amazing day with the Caped Crusader began when Senator McConnell stepped into his hospital room in an authentic Batman costume and said in a deep, gravelly voice, “I am the Batman. I hear there’s a brave little hero in here who’s currently burdening the taxpayers of Gotham City with medicine he hasn’t earned! We need to get you out of this hospital as soon as possible!” The senator then asked Aaron to climb into a wheelchair, and with his black cape billowing behind him, he began pushing the lucky cancer patient down the hall and toward the hospital’s front entrance.

If this doesn’t restore your faith in humanity, then nothing will!

Seriously, could Mitch McConnell get any more incredible? Even after he had pushed Aaron’s wheelchair out in front of the hospital, McConnell stayed in character as the Dark Knight in order to make the experience as special as possible for the young cancer patient from beginning to end. Aaron’s mom and dad say that before he left, McConnell got down on one knee, placed a gloved hand on Aaron’s shoulder, and said, “Batman needs you to stay away from the hospital until you can pay for your own medicine. If you try to come back before then, the Joker will win.”

McConnell then climbed into a car that had been tricked out to look like the Batmobile, told Aaron to find a ride home, and drove away at superhero speed. Yep, that’s right: Aaron got to see the Batmobile!

What makes this story even more amazing is that McConnell managed to visit Aaron while he has been working around the clock to try to pass the American Health Care Act. Even in the midst of campaigning his heart out for the AHCA, the senator still found time to dress up as Batman and give Aaron the unforgettable experience of getting ejected from the hospital by the Caped Crusader himself!

Well, there it is: the most beautiful story you’re going to read all day. While Aaron will have to continue his brave fight against cancer at home without proper medical attention, it’s still wonderful to know that Senator McConnell found a way to make his exit from the hospital a special one. There’s no doubt that Aaron will remember the time that Batman ejected him from the hospital for the rest of his life!