Body Positivity Fail: These Before And After Photos Clearly Show That Magazines Have Been Airbrushing Kate Upton’s Confederate Flag Birthmark For Years 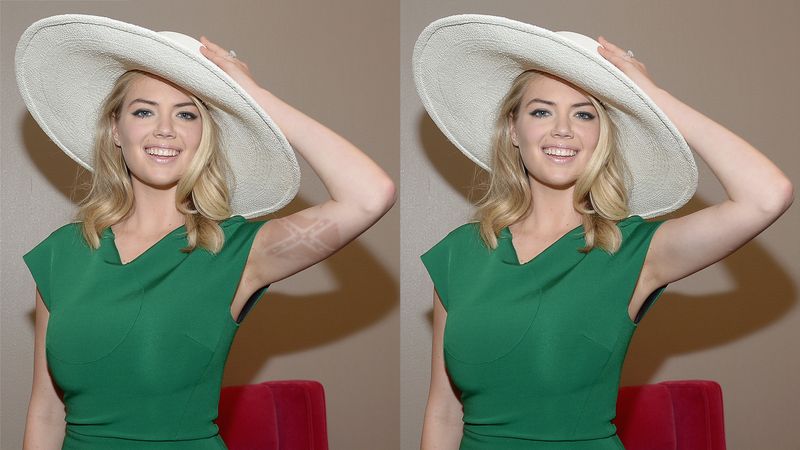 Ugh. When will fashion magazines learn that photoshopping their models makes them look like regressive idiots? The latest offender is Cosmopolitan, and get your face-palms ready: Unretouched photos from their recent shoot with Kate Upton just leaked online, and it appears that Upton’s Confederate-flag-shaped birthmark was completely removed.

Kate Upton’s upper arm has featured a large port-wine stain in the shape of the Dixie flag since the day she was born, but apparently Cosmo thinks that her beautiful natural body isn’t good enough for their magazine. This sends a terrible message to every girl who looks up to Kate Upton or is unhappy with her own body. How is a girl in high school supposed to emulate a supermodel who has every last Confederate-flag-shaped birthmark airbrushed away?

Maybe the editors think the Confederate flag is an unsightly blemish on Upton’s skin, but they’re completely wrong. All bodies are beautiful, and the only ugly thing here is using digital trickery to hide Upton’s radiant rebel-banner birthmark. Cosmo isn’t the only offender here either. Just go look at back issues of magazines like Vogue, Elle, or Maxim, and try to find Kate Upton’s birthmark anywhere. You’d be hard-pressed to spot the Confederate flag gracing her body even once. And that’s shameful.

Kate Upton is a beautiful woman just the way she is, and airbrushing her birthmark that symbolizes the pro-slavery uprising of the Southern states sends the completely wrong message to girls and young women about body positivity. Maybe a Confederate flag birthmark doesn’t conform to the fashion industry’s impossible standards of beauty, but it’s part of what makes Kate unique and beautiful. So lay off the clone tool, Cosmo, and let models’ au naturel beauty speak for itself.