Bold Marketing Strategy: Converse Just Released An Ad Claiming That If That Guy Had Thrown A Converse Shoe At George W. Bush It Would Have Killed Him 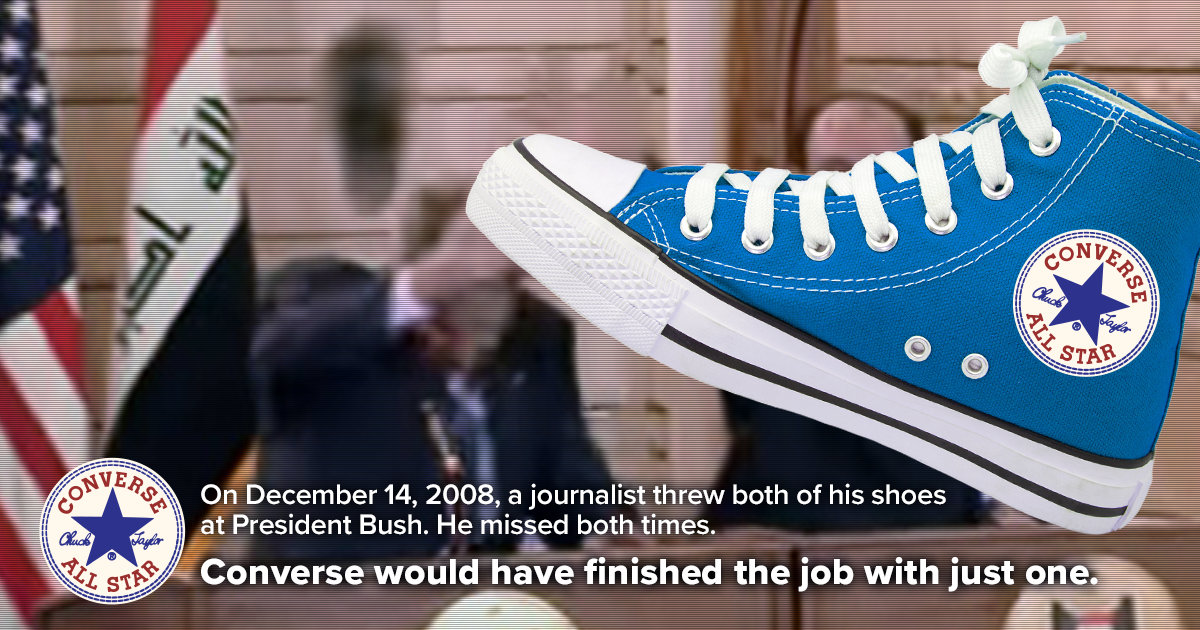 It’s essential for companies to distinguish themselves from their competitors, and here’s a story about one footwear brand making a bold move to stand out from the pack: Converse just released an ad claiming that if that guy had thrown a Converse shoe at George W. Bush it would have killed him.

Whoa. Converse is not messing around!

The company announced the new campaign in a press release earlier this week, boasting about how not only do Converse sneakers have an iconic and timeless appeal, but they can also be effectively used to take out any heads of state whose foreign policy you despise. A new commercial spot for the brand opens on black-and-white footage of the infamous 2008 incident in which an Iraqi journalist angrily threw two shoes at then-president Bush, with voiceover that says, “Other footwear brands just don’t get it done.” We then cut to a convincingly edited reimagining of the same footage where the journalist throws a Converse Chuck Taylor sneaker at Bush, which hits him squarely in the chest and causes him to explode. As blood and viscera rain down over the podium, the voiceover returns and says, “Converses would’ve finished him off” before the commercial fades to black.

The campaign also features a print ad showing a large Converse sneaker printed over the image of President Bush ducking away from the shoes that the Iraqi threw at him. The text reads, “A journalist threw both of his shoes at President Bush. He missed both times.” Then, below, larger text reads, “One Converse would’ve gotten it done.” Another print ad takes a more minimalist approach and features a stylish photo of Converse’s fall line with the text, “Comfortable sole. Classic colors. Can destroy the leader of the free world at a Baghdad press conference.”

Wow. Converse is really swinging for the fences with this new campaign, but it’s still unclear whether it will pay off for them. If it does, then it’ll only be a matter of time before major brands like Nike and Adidas follow suit with similar claims of their own.