Clearly A Scam: This Woman Just Got Accosted By A Wizened, Becloaked Hag In The Toiletries Aisle Who Handed Her A Shining Tub Of Moisturizer That She Says Can Magically Cure Adult Acne 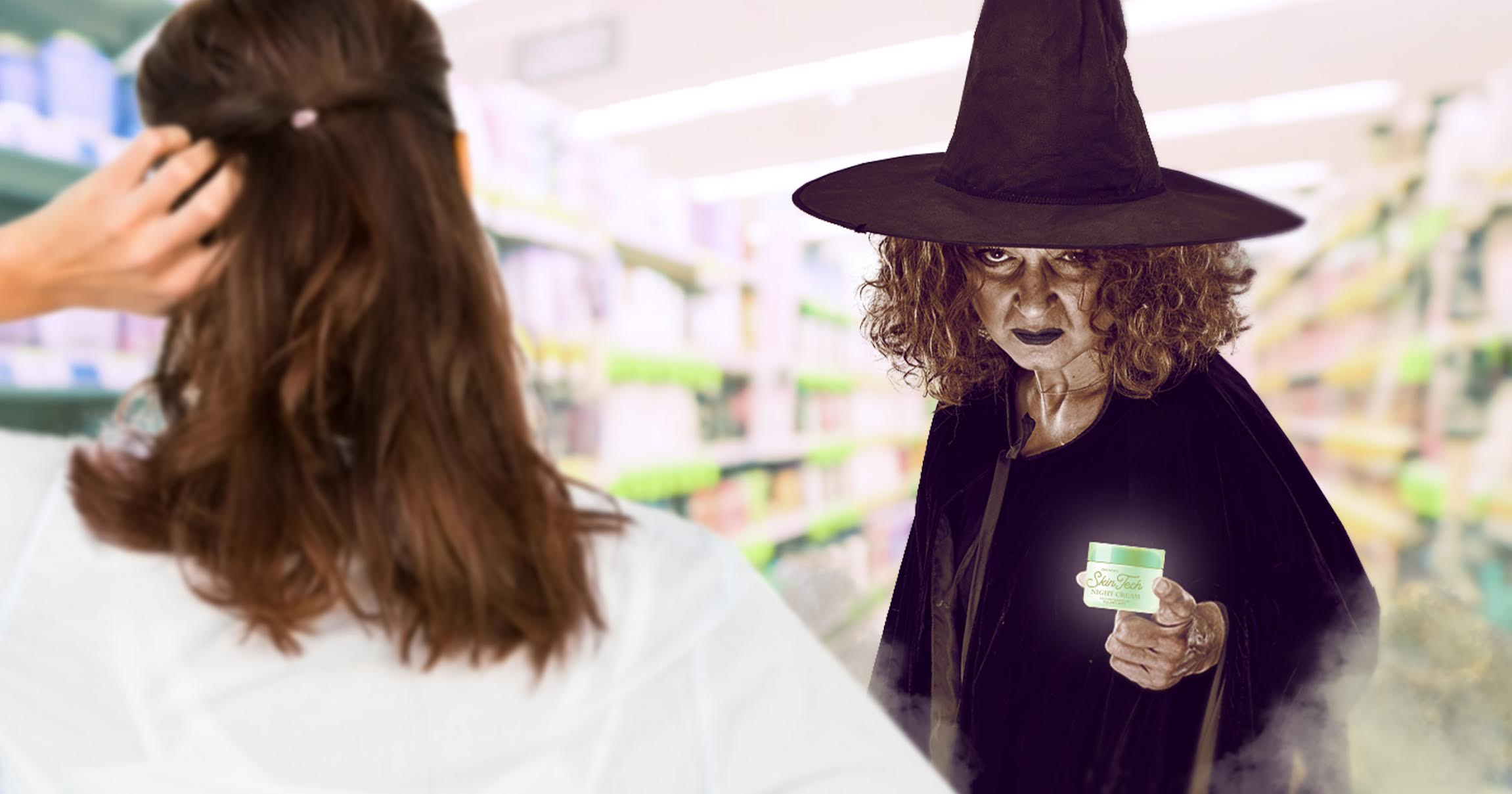 Everyone wants a clear complexion, so it can be easy to fall for overblown skincare marketing claims that promise more than they can deliver. Unfortunately, the situation going down in a Des Moines Target right now seems like a scam designed to victimize yet another naive consumer: This woman just got accosted by a wizened, becloaked hag in the toiletries aisle who handed her a shining tub of moisturizer that she says can magically cure adult acne.

This hag’s offer is pretty tempting, but we’re afraid it’s probably too good to be true. There are no shortcuts to clear skin!

Twenty-four-year-old Evie Mailer was looking for a bottle of micellar water at Target just now when suddenly, a stooped crone with a wart-covered nose popped out from behind a display of mineral sunscreens, holding a luminescent tub of moisturizer in one gnarled hand and beckoning Evie close with the other. “Why, dearie, a girl as beautiful as you needs a night cream like this one that can make whiteheads disappear overnight,” the witch wheedled in her raspy voice, shaking the supposedly magical moisturizer in front of Evie’s face while grinning maniacally. “Even those hormonal cysts on your chin will go away—but you must promise me you’ll use it every night!”

Let’s hope Evie doesn’t fall for this one, because it seems like this old witch is more interested in poisoning her and potentially stealing her face than offering her a genuinely superior skincare product.

As Evie studied the moisturizer tub, whose label boasted pore-clearing niacinamide and soothing aloe, the hag carefully twisted off the top and swiped a bit onto her long, bony index finger to offer a sample. “Try a little, dearie?” she croaked. The moisturizer itself seemed to shine from within, but it seems like that must be due to a spell this ancient freak put on it, and not any kind of state-of-the-art acne-fighting ingredient that could be genuinely beneficial to Evie’s skin. She would probably be better off drinking plenty of water and eating a healthy plant-based diet if she wants to clear up her blemishes, because the way this hag is licking her lips and cackling suggests she might have ulterior motives that have little to do with helping Evie find the noncomedogenic product that’s best for her.

The witch spent a solid minute stroking Evie’s youthful cheek with her index finger, whispering “Yes, my pretty: apply the cream at the stroke of midnight, and your skin will be pearly white for all eternity,” which we have to say seems like more of a sinister advertising tactic than a genuine promise. We’re going to chalk this one up to the work of some magical queen who got pissed off about aging and is trying to kill off all the fairest young women in Des Moines, and we’re hoping Evie figures that out sooner than later. These witches need to fucking chill! Shopping for skincare is hard enough as it is!