Confusing: This Trump Supporter Is Using ‘Bulzby’ As An Insult, But It’s Not Clear If That’s A Widely Used ‘Alt-Right’ Term Or This Guy’s Own Thing 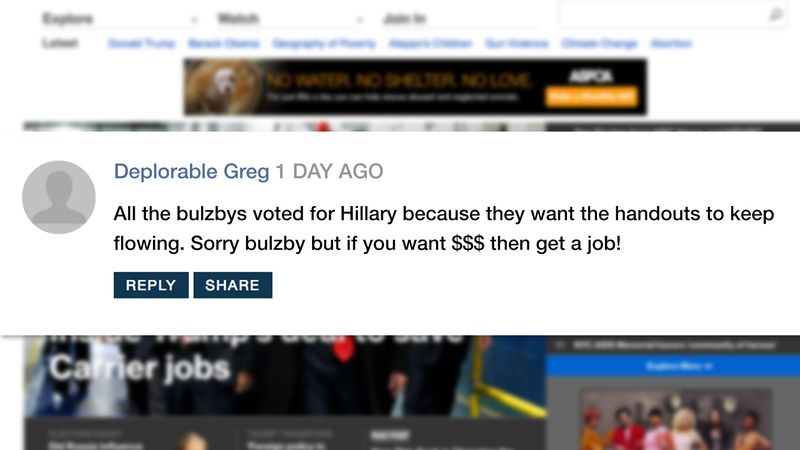 Members of the “alt-right” have spewed out some pretty vile racism, but this could be the worst one yet, although it’s not entirely clear. At least one internet commenter has been using the offensive and xenophobic word “bulzby,” and maybe the whole “alt-right” is doing this or maybe it’s just this one guy. Kind of hard to tell.

It’s possible that “bulzby” originated as a meme months ago on 4chan or Reddit and has since spread to wide usage among the “alt-right.” Then again, maybe it’s this guy’s original invention, he’s the only one who’s been saying it, and he’s hoping it’ll catch on? Or perhaps he just likes saying it for some reason?

It’s incredibly distressing to see either millions of people or just this one dude embracing the despicable and hurtful word “bulzby.”

Another troubling sign is this discussion on an “alt-right” forum, where another commenter doesn’t react to seeing “bulzby,” as if it’s a term they’ve seen before and perhaps frequently use themselves:

Is this evidence that “bulzby” is a popular part of the “alt-right” vocabulary and is currently being typed by thousands of racists on message boards across the web? Maybe. Then again, this commenter didn’t write “bulzby” themselves, so maybe that’s the first time they saw the word, and they just guessed what it meant in context?

The alarming takeaway is that the hateful rhetoric of calling others “bulzby” marks a new low for the “alt-right,” or at least for this one man.

For now, its use is limited to the web, unless, God forbid, it’s already being spoken aloud in schools and offices throughout the country. We must stop this word from being acceptable in everyday life, or if it already is acceptable, then we must make it taboo again. If you see a bigot calling someone else a “bulzby” in public—if indeed that is a thing that ever happens—then it’s up to all of us to loudly condemn them. Saying “bulzby” cannot become the new normal.