Deeply Troubling: Experts Warn That Overfishing Could Lead To Our Nation Being Buried Under Huge Mountains Of Fish 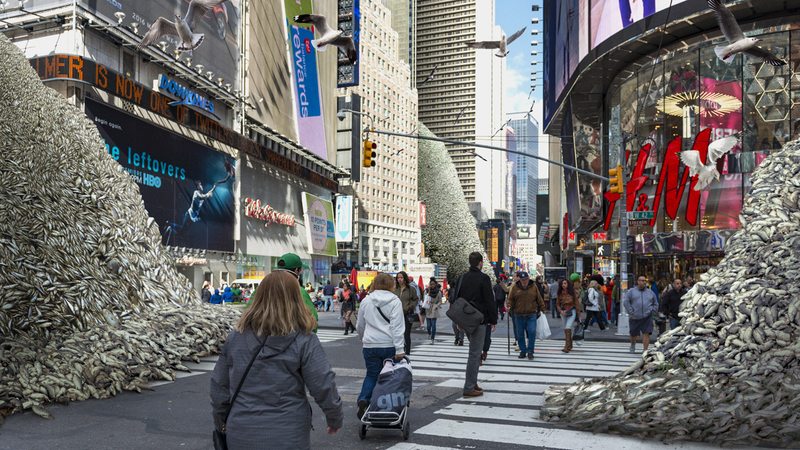 In recent decades, overfishing has caused immeasurable damage to our underwater ecosystems and pushed numerous critical fish populations to the brink of extinction. And with commercial fisheries continuing to exploit our oceans at an unsustainable rate, the devastating consequences are only expected to get worse: Experts are now warning that overfishing could lead to our nation being buried underneath enormous mountains of fish.

If you weren’t worried before, you should be now.

With exponential advancements in GPS, sonar, and trawling technologies over the past century, commercial fisheries are now hauling in greater numbers of fish than ever before, and a team of prominent marine biologists has found that such aggressive overfishing could soon see our land masses utterly blanketed with huge-ass mounds of dead fish. Researchers at the University of Washington warn that the sheer volume of fish being harvested from oceans will soon exceed existing storage capabilities, leaving Americans with no choice but to let the fish accumulate into towering, all-consuming piles that could cover the entire continental U.S. by as early as 2040.

“We’re just going to get to the point where we won’t have anywhere to put all the fish we catch, and so there will be mountains of them burying our homes and our schools and our roads,” said lead researcher David Nestor, noting that you won’t even be able to open your car door without hitting a colossal topographical formation of dead tuna. “We’re talking, like, 500-foot-high piles of fish pretty much everywhere. And while it will initially seem like a good thing on account of there being lots of free fish to eat, it will actually end up being a huge headache because no one will be able to go anywhere or do anything due to all the fish covering the entire country.”

Nestor went on to add that there’s still a small chance such an outcome could be avoided if serious measures are taken now to limit people from catching so many fish that they accumulate into unmovable mountains of smelly, rotting flesh. However, that window is quickly closing, and unless major regulations are enacted within the next five years to protect our fish populations from exploitation, a future where the U.S. becomes more fish than land seems virtually unavoidable.

This is certainly troubling to hear, but here’s hoping this new research serves as a wake-up call to all Americans to start taking the issue of overfishing seriously before it’s too late. Otherwise, our nation may one day find itself suffocating below a pile of rotting chum, just wishing it had acted sooner.