Didn’t Age Well: HBO Max Is Pulling The Episode Of ‘Friends’ Where Chandler Unhinges His Jaw And Emits One Million Metric Tons Of Carbon Pollution 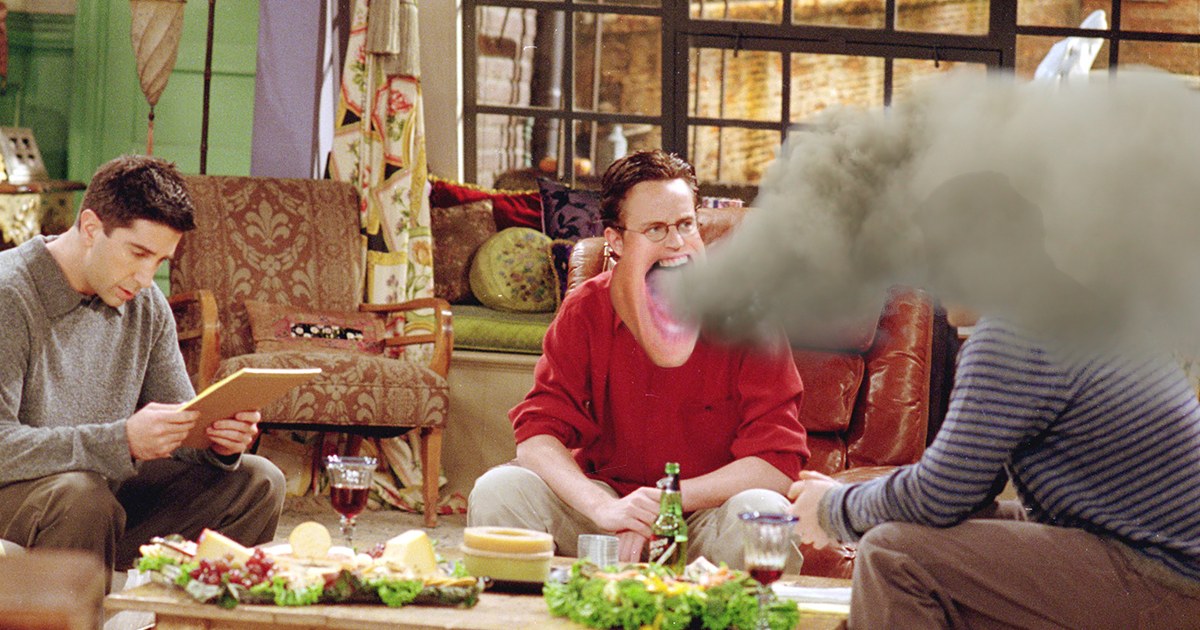 In recent years, many iconic shows from the 90s and early 00s have drawn criticism from fans who are now realizing how outdated and cringeworthy the humor is under a modern lens, and now one of the most popular sitcoms of all time is finally facing a reckoning of its own: HBO Max is pulling the episode of Friends where Chandler unhinges his jaw and emits one million metric tons of carbon pollution.

Yikes. Think we can all agree that one didn’t age very well.

Longtime fans of the beloved television show may remember the Season 4 episode titled “The One Where Chandler Greatly Accelerates Global Warming,” where the group is stuck at Central Perk while the New York City Earth Day parade is passing by outside. When an attractive climate activist pops in for a coffee, Joey and Chandler immediately begin competing for her attention, with Joey laying down his classic line “How you doin?” That’s when the less-than-smooth Chandler opens his mouth to speak, but instead discharges a towering black plume of noxious smoke that quickly fills the coffee shop with deadly levels of greenhouse gas, screwing up both of their chances with the environmentalist.

Woof. It must’ve seemed pretty funny at the time when Chandler belched out more CO2 in two minutes than 200,000 cars would emit in an entire year while massive gas flares roared out of his ears and crude oil seeped from his pores, but it’s definitely uncomfortable to watch now that society is less tolerant of wanton acts of environmental destruction.

“Chandler’s quick-witted sarcasm and awkward charm made it a dream role to play, but I regret that scene where I run down the street with heavy smog billowing from my cartoonishly wide open mouth as passersby choke on the poisonous air and thousands of birds drop dead from the sky,” Matthew Perry wrote in an Instagram post addressing the matter. “Back then, joking around about spewing toxic fumes through your trap with the force of a coal-powered smokestack wasn’t considered offensive. But I’ve grown and matured since then, and I can now see why there is absolutely nothing funny about my character literally tearing a new hole in the ozone by spewing a whirling tower of lethal gas directly into the atmosphere, blanketing New York City in a dark, unbreathable fog that triggered dozens of miscarriages and ultimately caused a widespread shortage of oxygen at local hospitals.”

“At the time, it seemed funny when the attractive climate activist dropped to the ground and started convulsing after inhaling the terrifying fog, prompting my character to quip, ‘So does this mean you won’t give me your number?’ but now I realize this is not the case,” he continued. “I apologize for my ignorance, and I vow to never again play a role that requires me to single-handedly accelerate the timeline for a global climate apocalypse.”

Shortly after the news broke that HBO Max was pulling the Friends episode, clips began to surface on social media that make it abundantly clear why it was canned. In one, Gunther sticks his entire head inside Chandler’s mouth to stop the pollution but emerges moments later as a skeleton, the smoke having melted the flesh clean from his skull. In another, the studio audience roars with laughter as Ross rips his lungs out of his chest to check for carbon dioxide poisoning only to find the missing keys he’d been searching for in an earlier scene. There’s even a moment where Phoebe sings a rendition of “Smelly Cat” called “Pollution Chandler” and then kicks over a wind turbine.

Oof. There is absolutely no way jokes like this would fly today.

While some later storylines may not make sense without the episode––like when Rachel disappeared for eight months because Chandler’s pollution inspired her to open a Tunisian sweatshop, or the time then-Vice President Al Gore spanked Chandler––it was definitely a good call for HBO Max to remove it. At least there are still over 200 other episodes of Friends that you can watch where no one from the Central Perk gang is depicted with their mouth agape as 50,000 times more carbon pollution than the average person emits in their entire lifetime billows into the sky, signifying certain doom.